Artists Interviews
Learning from the Master: An Interview With Roger Nichols
by Maureen Buja July 31st, 2022 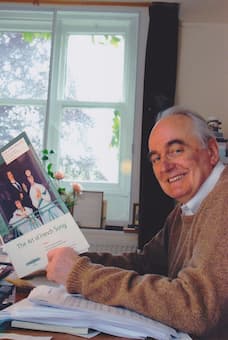 One of the most wonderful experiences in the world is to sit with the master of a subject and listen to their discourse. That’s what our recent conversation with Roger Nichols was like. This master of French music has made a collection of his thoughts, both published and recorded over the past 40 years, and put them into a new book, From Berlioz to Boulez, where every page, seemingly, has yet another delight, another insight, or another connection you hadn’t considered before. This is the kind of book you should read with like-minded friends where you spend all your time reading bits out to each other.

He starts with an examination of Hector Berlioz, recognizing that there are two sides to this unique genius: the fiery master of Symphonie fantastique and the cooler master of works such as L’enfance du Christ. Berlioz’s beginnings were difficult, with a review of his Huit scènes de Faust, sent privately to Goethe, reviewed by Goethe’s friend Carl Friedrich Zelter as a ‘succession of expectorations, sneezings, croakings and vomitings; an excrescence, the residue of an abortion resulting from an act of hideous incest’. This seems to us to be a little extreme!


It’s these kinds of cogent quotes that make this book come alive. One audience member at the premiere of Symphonie fantastique told Berlioz ‘I wouldn’t have thought an orchestra capable of producing such effects. Oh, how I loathe my piano now; it’s so feeble and paltry!’, as Berlioz reported in a note to his father.

Nichols reviews Chopin and the unique touch he brought to the Polonaises and Mazurkas, marking territory ‘on to which, sensibly enough, few of his fellow composers dared follow him.’ He comments on Charles Gounod’s brilliance during his life and his rapid decline thereafter, urged on by the vitriol in the pens of critics such as George Bernard Shaw. He examines Saint-Saëns as a master, but a master without followers, asking if there’s anything one might define as ‘un style Saint-Saëns?’ He wonders if Saint-Saëns fell into the trap that Debussy saw in so many musicians: having the technical ability to find a solution to a problem…but not necessarily the most artistic one.

These kinds of questions are exactly what we need as music historians – they force us to look at a composer not only in his life but also as part of a larger continuum of music.

Nichols examines the history of Pelléas et Mélisande, but as it travelled through the hands of Gabriel Fauré, who supplied the incidental music for a production of the play by the actress Mrs Patrick Campbell. Debussy had begun work on his full opera, having completed a first draft, and, when requested by Mrs Campbell to adapt his music to her production, he declined. She found Gabriel Fauré only 10 weeks before the London premiere. Severely pressed for time, Fauré wrote out a short score and gave it to his student, Charles Koechlin, to orchestrate. They made the deadline, Fauré conducted 3 of the matinee performances, and the music was praised as being an enhancement to the performance.


It is, of course, Debussy’s opera that has come into the repertoire, and not Fauré’s music. We discussed the utter listenability of Debussy’s setting and how the text is so clear. Nichols wryly notes that we aren’t being shouted at, we’re overhearing conversations. This is so important that there are times, extremely rare in opera, that the orchestra actually goes silent.


When Debussy entered the Conservatoire in 1872, French music was beginning to stand on its own, starting with the work of the Société national de musique. When he won the Prix de Rome in 1884, the greatest difficulty was leaving the musical world of Paris behind. Wagner was becoming the flavour of the day and composers were attracted to him in droves… but Debussy found his own way through Wagner’s ‘chromatic striving’ and pitied composers such as Chabrier and Chausson who he saw as labouring under ‘the ghost of old Klingsor.’

And then Debussy wrote Prélude à l’après-midi d’un faune and the world changed. With just one melody on the flute (and not with an enormous orchestra), Debussy created modern music.


We all know that Debussy despaired of the title of ‘Impressionist’ that was applied to him – his name of choice was to be a réaliste. The self-imposed title of réaliste was already being used by the painters in question to describe themselves because they saw themselves as painting ‘exactly what they saw, unimpeded by memory or by intellectual knowledge of what “must” be in front of them.’ Debussy wrote to his publisher, Jacques Durand, while he was working on the orchestral score of Images:

I’m trying to write ‘something else’ – realities, in a manner of speaking – what imbeciles call ‘impressionism’, a term employed with the utmost inaccuracy, especially by art critics who use it as a label to stick on Turner, the finest creator of mystery in the whole of art.


This should convince us that ‘Impressionist’ is absolutely the wrong word to use in relation to Debussy’s music (or Turner’s art).

In commenting on Ravel, Nichols has a nice turn of phrase describing the line where Ravel stood: ‘It’s fair to say that politically Ravel was a divided soul. He counted himself as a Socialist but he was also a socialite’. In 1911, however, Satie dismissed Ravel as a ‘highly talented Prix de Rome winner, a flashier version of Debussy’.

One of the treasures of this book are links that Nichols makes between factions and contemporaries’ reactions to composers, such as when he quotes the singer Doda Conrad about Stravinsky’s dominations of the French musical world, so

…completely, to the point that I contend that the composers who were born, say, in 1900 were handicapped because of his strong personality. Of the composers who could fight Stravinsky, the only one in France I could think of would be Poulenc, because Poulenc had his own little language which went its own way. But others … turned to Erik Satie, to be shielded from Stravinsky; because Satie was very independent of Stravinsky, as he was of Ravel and Debussy.

Doda Conrad was the son of the soprano Marya Freund, who worked with Schoenberg in Vienna and was the credited interpreter of Pierrot lunaire. She worked with Mahler, Fauré, Debussy, Ravel, Stravinsky, Poulenc and with the circle around Satie, Cocteau, and Les Six.

Nichols’ discussion of Cocteau as a person as a serious artist who was rarely solemn is illuminating. We rarely get a view of this supreme master of artifice from his close companions and we come away feeling that we have perhaps not really yet seen the real man.

Nichols is also a master at disassembling monuments: we tend to see Les Six as a unified group whereas the members of it saw the group differently. Honegger saw Les Six as a group tied together by friendship rather than aesthetic ties. For Cocteau, Les Six was a vehicle for humour and frivolous gaiety. We can now look at Les Six as a continuum, with Honegger at the serious end and Poulenc, Auric, and Milhaud at the light-hearted end, particularly with their use of jazz.


Nichols also discusses Poulenc’s setting of Cocteau’s monodrama La voix humaine¸ gives us a brief biography of Maurice Duruflé, and an extended discussion of Messiaen. For many music lovers, Messiaen can be difficult. Nichols considers that Messiaen’s organ music is possibly his best body of work, excepting, of course, the astonishing Quatuor pour la fin du temps. One testimony to the difficulty of his work is that in the 30 years since his death in 1992, Messiaen’s star still has not risen. Nichols called him, with more than a touch of tongue in cheek, ‘the César Franck of the 20th century,’ noting that his harmonies were so distinctive that they cannot be emulated – follow that master and you just end up sounding like Messiaen.

The book closes making a connection from Messiaen to Boulez, who had been in Messiaen’s class at the Conservatoire in 1944. Nichols considers Boulez as an extension of Debussy, but with a scientific side. What we might see as Boulez’ ability to reinvent himself (composer, conductor, writer, institution founder and leader) might also be viewed as Boulez taking the time to find out who he was. Nichols believes that it took a long time for Boulez to discover just how exceptional he was.


Boulez died in January 2016 and Nichols pointed out that he, like Messiaen, has not yet had a return to favour. He’s not played as much as Dutilleux, for example.

We closed with asking Roger Nichols who were his favourite composers – and we permitted him to pick more than one. Debussy and Ravel were the immediate answers, followed by Chabrier and Dutilleux. He mentioned that The New Ravel Edition, now in preparation, in its re-examination of Ravel’s scores, was finding all kinds of mistakes, such as the inclusion of an extra measure at the end of his Piano Concerto for the Left Hand. This work was a famous battleground between the composer and the commissioner, Paul Wittgenstein, who as the man who paid the bill thought he was also free to make changes as he wished. Ravel didn’t like those changes and battled Wittgenstein over them. There was also a 2-hand version made of the work during Ravel’s lifetime by Alfred Cortot that caused its own set of problems, starting with the fact that Ravel detested it.


The title of the book is From Berlioz to Boulez and the book truly takes you over a span of some 150 years – from the late Romantic to the Modern – all through the work of the greatest composers in France. It’s the nature of books like this that cover writings over many decades to have repetitions, but that only serves to re-emphasize some of Nichols’ most important ideas. He tracks trends, he follows friendships, notes where enemies were made, and places us in the middle of the most exciting periods in the development of music in France. We cannot recommend this book highly enough.