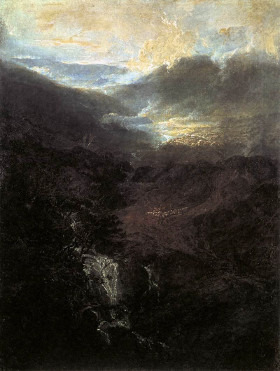 Morning amongst the Coniston Fells, 1798

The recently released film, ‘Mr. Turner’, by Mike Leigh focuses on the last 25 years of James Turner’s (1775-1849) life, the height of Turner’s career. The film opens with a beautiful Dutch landscape scene, with the sun rising at dawn, showing Turner sketching — a dark and lonely figure surrounded by the immensity of nature. Turner, like many of his contemporary painters classified as ‘Romantic’, was inspired by nature. Throughout his life, he frequently travelled throughout the English countryside and Continental Europe — studying at the Louvre in Paris for many months – through Belgium, Switzerland, Germany and Italy, filling his sketchbooks with pencil drawings and color-wash sketches.

Turner’s genius was recognized early in life, and many considered him one of the most important English landscape painters, both in oil and watercolor. Every year, his paintings were exhibited at the Royal Academy in London, which, like the annual exhibition salons in Paris, assembled the most important works of painters and sculptors to be judged and, of course, offered for sale. Landscape painting became the particular focus of Romantic painters in England and on the Continent. Whereas previously used as a backdrop for the depiction of historical events, it now became independent, existing as the sole subject of the paintings. In Turner’s case, the drama of nature becomes even more radical, in that the depiction of historical events becomes secondary to the extraordinary rendition of atmosphere, of mists at sunrise, showing the drama and intensity of nature. When Turner exhibited his painting Morning amongst the Coniston Fells, Cumberland, in 1798, he included lines from Milton’s ‘Paradise Lost’ — “Ye mists and exhalations that now rise/From hill or streaming lake, dusky or gray/Till the sun paints your fleecy skirts with gold/In honour to the world’s great Author, rise”. 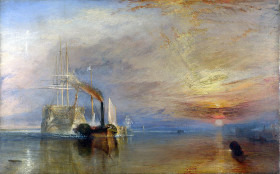 His paintings become almost abstract in the way he handles his oil paints and water colors. In his Fighting Téméraire Tugged to Her Last Berth to be Broken Up, the old warship is shown, with sails furled, towed by a steam tug to the scrap yard – the old making way for the new. In his painting Rain, Steam and Speed the subject matter, i.e., the steam engine racing along the tracks, seems almost just an impetus to paint the effervescence of nature and to show the impact and power of modern technology. It cannot come as a surprise that Turner’s late works in particular become more and more abstract – light and color themselves become the subject matter. Here, Turner has transcended representation — the paint itself stands for ideas, actions or feelings. In this he attracted the interest of the French Impressionists, and of Monet in particular, who would push this process even further, leading painting well into the 20th century with the complete fragmentation and disappearance of the object. Turner’s last words on his deathbed, “The sun is God”, had led him throughout his life to push painting towards modernism. 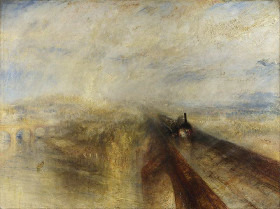 Frédéric Chopin (1810-1849), Turner’s contemporary, with his early compositions of Nocturnes, Ballades, Polonaises and Mazurkas, was also considered a musician of the Romantic generation. In Chopin’s compositions we also see a similar development, in that the appearance of the

‘’…Fragment in its most obvious form – a piece that begins in middle or does not have a proper grammatical end – is only the simplest example of the new spirit of experiment, and the way it breaks down the established conceptions of what a work of music ought to be relates it to the major stylistic developments of the time” (Charles Rosen, The Romantic Generation, p. 79) 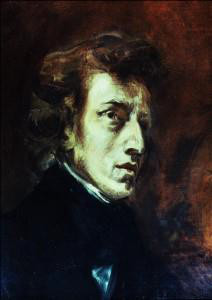 In Chopin’s later compositions, in many of his Etudes, and in particular in the ‘Barcarolle, op. 60 in F-sharp major’, he would also move well beyond his time. The Barcarolle, one of his most modern compositions as to its harmonic plan, is constructed in the three-part form of a nocturne — luminous, as if situated in a sunny climate — the barcarolle was originally the song of the Venetian gondoliers. Initially there are no dramatic effects, no stark contrasts and a feeling of well-being prevails. The middle parts become almost monotonous until, interrupted by the left hand, it abandons the syncopated rhythm of the Barcarolle, sounding more like the regular movement of a clock. A sudden change in the tonality becomes a little menacing until the Barcarolle melody returns and the luminous simplicity of the composition resumes. In the last part, Chopin seems to return to the beginning, but he effects a synthesis of the two principal themes, and in the very modern coda lets us guess what his improvising genius would be – creating a palette of figures, totally original in their freshness and modernity.

Turner and Chopin can be considered true modernists, leading painting and music well beyond their time.