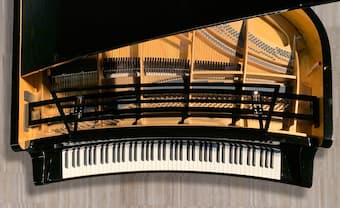 The most valuable violins in the world sport colorful nicknames that disclose the providence of ownership or describe the sound quality or shape of the instrument. We just have to think of the “Molitor Stradivari,” the “Virgin Stradivari,” or the “Dolphin Stradivari.” If we follow that type of reasoning, the brand-new Maene-Viñoly Concert Grand Piano will probably become known as “Ergonomic Keyboard.” The primary reason behind this radical new keyboard design emerges from very practical considerations. Repetitive strain injury (RSI) is a term used for pain caused by repeated movement of part of the body. Most commonly it affects the shoulders, elbows, forearms, wrists, hands, and fingers. As the term implies, it is primarily caused when people engage in repetitive activities, like playing some sports, working on assembly lines, typing, gaming, and performing on all manner of instruments. 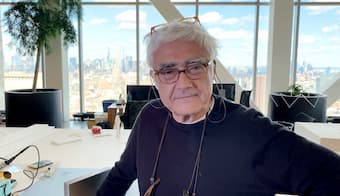 If you happen to be a pianist, such injuries might be a thing of the past as architect Rafael Viñoly and master piano maker Chris Maene have designed an instrument with a curved ergonomic keyboard. It matches the natural sweep of a pianist’s arms rotating from the shoulders and facilitates effortless playing across all registers. “The keyboard’s radial arrangement is extended to strings that fan out over a much larger soundboard augmenting the instrument’s capacity for nuance, clarity, and power.” This new instrument sounded for the first time in a public performance at the Verbier Festival 2022 with Kirill Gerstein as the pianist. 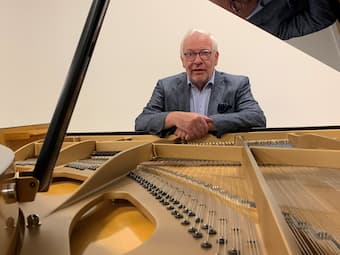 While we have seen these types of keyboards attached to computers and other electronic devices, the ergonomic design is basically a first for the piano. It took six years of development and a team of noted piano kinematic researchers, foremost Renzo Pozzo from the University of Udine, and the pianist and researcher Henriette Gärtner to determine the ideal arch shape for the keyboard. The rest of the instrument was then, with the aid of computer-guided design and acoustic modeling, built to accommodate the new keyboard shape. According to Kirill Gerstein, the instrument provides 33% more soundboard surface area delivering a different sonic signature, “Classical forms remain vibrant and relevant through change and development. The Maene-Viñoly concert grand advances the discourse of what a modern grand piano is while acknowledging and utilizing the traditions and ideas of the past. Its curved keyboard, designed to follow the natural arc of the arm’s movement, is a starting point for a re-examined layout of the larger soundboard that follows along this curvature. The unified design, ergonomics, and function give the piano a unique sonic signature.” 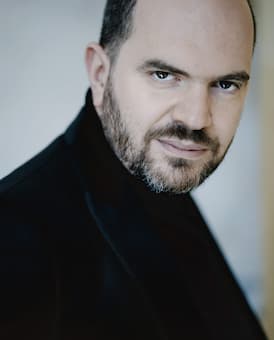 Apparently, the new instrument was the brain and love child of architect Rafael Viñoly. An avid amateur pianist “whose own experience and close friendships with master pianists have sharpened his awareness of the instrument’s biomechanical demands and inspired his idea to curve the keyboard.” He consulted with Daniel Barenboim and Martha Argerich in 2016, and eventually entered into a partnership with the Belgian instrument maker Chris Maene. Piano enthusiasts will remember that Maene had previously partnered with Barenboim and produced an instrument that eliminated conventional string crossings, and instead arranged the strings in parallel fashion, running perpendicular to the keyboard without overlapping. For Rafael Viñoly, Maene’s expertise, “sensitivity and commitment to excellence can only have come out of a lifetime of probing and learning about making pianos.

But more than that, no other piano maker has the courage to challenge the status quo of a culture and industry that has seen little innovation on behalf of its most important exponents, professional artists.” According to everybody involved in the Maene-Viñoly Concert Grand Piano project, this grand piano has exceeded the team’s expectations of sound quality, ergonomics, construction, and aesthetics.

In Verbier Festival’s premiere performance, Kirill Gerstein selected a program attempting to showcase the varying qualities of the new instrument in sonatas by Stravinsky, Schubert, and Liszt. The good news first: the Liszt B-minor Sonata was spectacular. Clara Schumann once wrote that the Liszt Sonata was “just blind noise—no longer a healthy thought, everything confused, a clear sequence of harmony can no longer be found!” With all due respect to Clara Schumann, the exact opposite was true in Gerstein’s performance. On one hand, listeners were treated to virtuosity of crystal-clear clarity, with the dense piano texture dissected into clearly distinguishable voices across the piano’s register. 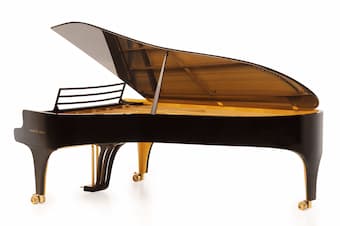 In addition, the instrument responded beautifully to the expressive nuances found in the multi-faceted transformations of the main motivic ideas. Personally, I no longer heard musical bombast, empty finger exercises or sickly emotionality but a highly impressive musical entity that had once again learned how to breathe. This should not come as a real surprise as the earlier Barenboim-Maene collaboration had already laid the fundamental groundwork for the present sound concept by combining parallel strings with the technical advantages of the modern piano. Kirill Gerstein looked reasonably comfortable and relaxed while navigating the ergonomic keyboard, and some clearly audible inconsistencies none withstanding, this new layout should be fantastic news for pianists of all levels. 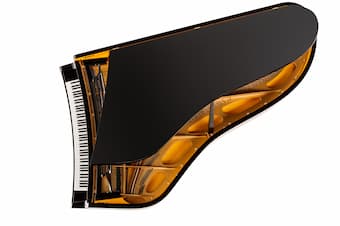 The aspects of sound that worked so well in the Liszt sonata—since the work was essentially written for the soundscape at hand—did not work well in the music of Stravinsky and Schubert. In my humble ears, the Schubert sonata actually seemed to accentuate the Unitarian weaknesses offered by the modern piano. The top register sounded thin and tinny, the bombastic bass came across as essentially hollow, and the normally rich middle register lost all its lyrical warmth. Schubert did perform on instruments with parallel string arrangements, but the soundscape of his pianos was radically different. Each register, and specifically the transitions from one register to the next featured a distinct and idiomatic tone color that became lusher and mellower depending on the dynamic level. 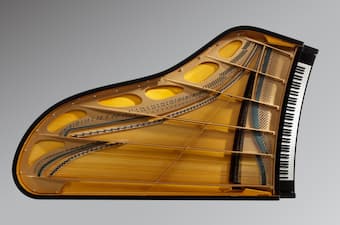 The piano from Schubert’s time served as the perfect vehicle for his skillful modulations, glowing transpositions, and the intricate combination of lyricism and polyphony. The soundscape of the Maene-Viñoly Concert Grand Piano, while undoubtedly providing the latest technical advances, seemed to struggle with many aspects of Schubert’s sonic imagination. Most troubling for me was the inability of the instrument to shape and sustain the intensely lyrical moments of Schubert’s music, although Gerstein dutifully tried his best. Melodies became a seemingly random collection of isolated notes strewn across the sound spectrum, with inner voice either completely unnoticeable, or standing out like a sore thumb. The only way of holding extended cantabiles together, as we heard in the encores, was to play them at a breathless tempo. If the 19th century had problems coming to terms with the late Schubert sonatas, I don’t believe that the Maene-Viñoly Concert Grand Piano does 21st-century audiences any favors. 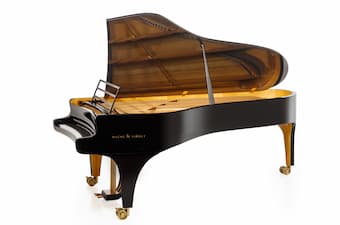 The Stravinsky sonata, written in homage to his musical heritage, was surely written for an instrument with crossing strings and simultaneously, the technical and sounding properties of the modern piano. As such, it represents the reverse scenario from the Schubert sonata, and to my ears, it was equally unsuccessful. The exploration of new sonic vistas and the exultation of hearing familiar music—although the Stravinsky sonata is hardly a household item—in unexpected sonic guises has been a driving force throughout instrumental and musical development. The question remains whether it is an exploration for the sake of exploration, or if it can actually promote music’s communicative and emotional power. As a solo instrument the Maene-Viñoly “Ergonomic Keyboard,” alongside its increased soundboard area seems the perfect medium for the technical and emotional challenges of Liszt’s music, and by extension for much of the middle to late Romantic repertoire; it remains to be seen what other repertoires it can successfully conquer.