Features
On This Day
22 May: Richard Wagner Was Born
by Georg Predota May 22nd, 2022
Tags: Wagner 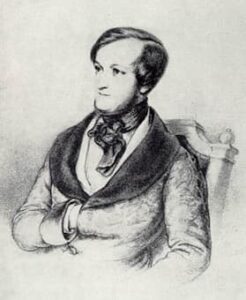 I absolutely love the way Richard Wagner is introduced in the most-respected English-language dictionary. The author writes, “It is both fitting and psychologically congruous that a question mark should hover over the identity of the father and mother of the composer whose works resonate so eloquently with themes of parental anxiety.” 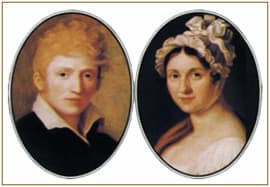 Wagner’s “official” father, so to speak, was the police clerk Carl Friedrich Wagner, but the boy’s adoptive father, the actor-painter Ludwig Geyer, “who took responsibility for the child on Carl Friedrich’s death in November 1813, may possibly have been the real father.” We also know that his mother, Johanna Rosine née Paetz, was not the illegitimate daughter of Prince Constantin of Saxe-Weimar-Eisenach. In fact, she was the daughter of a baker and the Prince’s mistress. Wagner was never sure of his father’s real identity, particularly since he suspected that Geyer had supposed Jewish origins. In fact, until the age of fourteen Wagner was known as Wilhelm Richard Geyer. 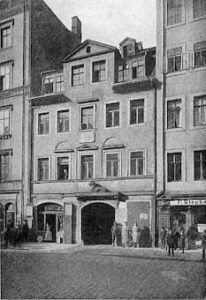 We do know with certainty, however, that Wagner was born on 22 May 1813 in the Jewish quarter of Leipzig, and that he was baptized at St. Thomas Church. He began his formal education at the Kreuzschule in Dresden, and he heard Carl Maria von Weber rehearse and conduct his opera Der Freischütz at the age of nine. Young Richard was mightily impressed and later wrote in his autobiography, “Weber’s features were really refined, delicate, and his intellectual appearance excited my ecstatic admiration. His narrow face and finely-cut features, his vivacious though often half-closed eyes, captivated and thrilled me; whilst even the bad limp with which he walked, and which I often noticed from our windows when the master was making his way home past our house from the fatiguing rehearsals, stamped the great musician in my imagination as an exceptional and almost superhuman being.” In the event, Richard decided to become a musician and composer. 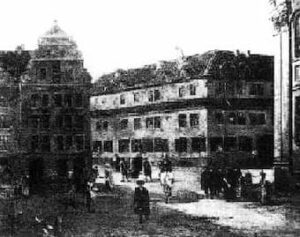 His Latin instructor doubled as Richard’s first piano teacher, and he bluntly told his young charge that nothing would ever come of him. Richard was furious, but later recalled, “Of course, the man was right… In all my life I have never learned to play the piano properly. Thenceforth I played for my own amusement; nothing but overtures with the most fearful fingering. It was impossible for me to play a passage clearly, and I conceived a great dread of all scales and runs.” When the family returned to Leipzig he took first lessons in harmony with Christian Gottlieb Müller and enrolled at Leipzig University in 1831. Richard spent his student days at the University of Leipzig drinking himself comatose and gambling away his mother’s pension. Nevertheless, he also spent a short but intensive period of study with the Kantor of the Thomaskirche, Christian Theodor Weinlig. Apparently, young Richard violently rebelled against exercises in counterpoint and canon, but in the end composed a number of piano sonatas. His first effort in the genre was published by Breitkopf und Härtel, but the Sonata in A Major, Op. 4, originally composed in 1832, was published only in 1960. 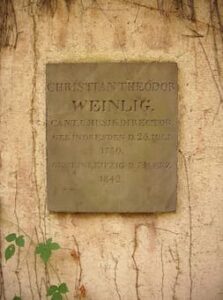 The headstone of Christian Theodor Weinlig

Wagner consistently downplayed the significance of his musical education, undoubtedly keen to cultivate the notion of the untutored genius. With his career as a pianist seemingly going nowhere, Wagner turned his attention to the wondrous world of the orchestra. He writes, “The mysterious joy I felt in hearing an orchestra play quite close to me still remains one of my most pleasant memories. The mere tuning up of the instruments put me in a state of mystic excitement; even the striking of fifths on the violin seemed to me like a greeting from the spirit world.” Wagner composed his only complete symphony in the summer of 1832, and the work was premiered on 15 December in Leipzig with Friedrich Wieck in attendance. His daughter Clara described the performance to Robert Schumann. “Listen! Herr Wagner has got ahead of you; a symphony of his was performed, which is said to be as like as two peas to Beethoven’s Symphony in A major.” 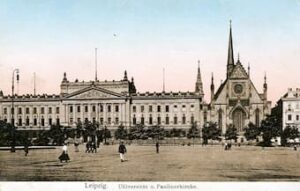 Wagner’s first attempt at an operatic project was a pastoral opera based on Goethe’s Die Laune des Verliebten, which probably dates from early 1830. The work was discontinued with only a scene for three female voices and a tenor aria written. His second project, Die Hochzeit, was conceived in October or November 1832, while he was visiting the estate of Count Pachta at Pravonin, near Prague. Based on a story from J. G. G. Büsching’s “Ritterzeit und Ritterwesen,” Die Hochzeit was a grisly tale of dark passions, treachery and murder. He destroyed the libretto, and the surviving music includes an introduction, chorus and septet. Wagner went on to secure his first professional appointment courtesy of his brother Albert, as a chorus master at the theatre in Würzburg.