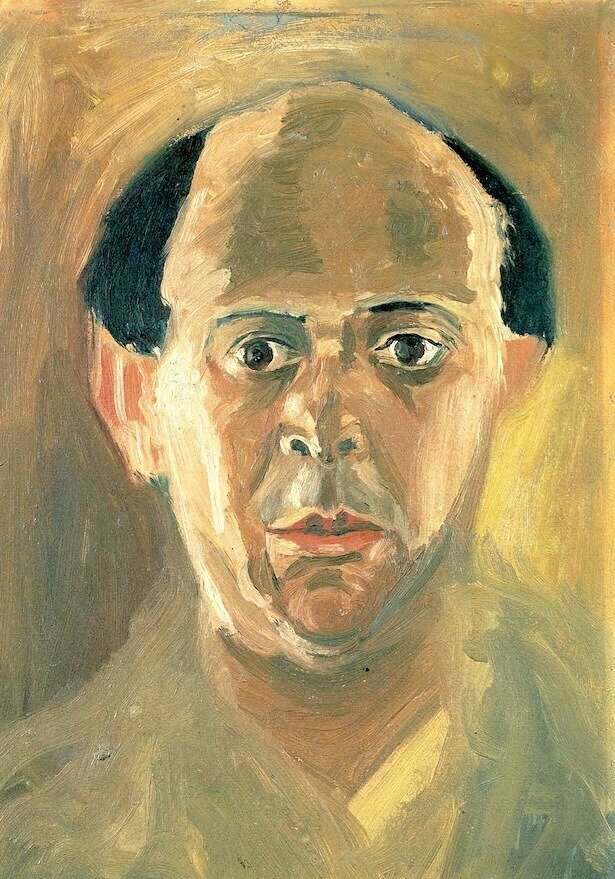 Just the mention of Arnold Schoenberg strikes fear in the hearts and ears of most listeners. But can you guess what struck the fear of god into Arnold Schoenberg? Somewhat ironically, the composer experienced a paralyzing fear of the number 13, a condition which is known in medical circles as triskaidekaphobia. I say ironically, because Schoenberg was born on 13 September 1874, and as fate would have it, he died on 13 July 1951 at age 76 (7+6=13). In the meantime, of course, he had devised a method of composition that assigns the 12 notes of the chromatic scale equal importance. Dodecaphony, also know as twelve-tone serialism or twelve-tone composition replaces the structural force of tonality with increased thematic oneness. I suppose we should be thankful that the octave had been subdivided into 12 and not 13 equal pitches, otherwise Schoenberg would never have departed from his earlier experimentations with free atonality.

Schoenberg genuinely believed that his birth on the 13th of the month would have fateful consequences. Throughout his life he fastidiously avoided rooms, floors and building with the number 13. He even refused to rent a house because its street address had been 13 Pine Street. This was not a superficial concern, but rather a powerful, all-consuming obsession that was central to his entire belief system. His musical manuscripts show the customary measure numbers, but starting with the composition of the 13th song of the cycle Das Buch der Hängenden Gärten (Book of the Hanging Gardens), Op. 15, Schoenberg began to substitute the number 13 with 12a in the measure count. And in his opera Moses and Aron, Schoenberg spelled “Aaron” with a single “a” instead of the double spelling customarily found in English translations of the Bible. The reason for the missing “a” has nothing to do with orthography, but is squarely numerological. You see, had the title included the second “a,” it would have had 13 letters. Omitting the second “a,” there are only 12.

As Schoenberg got older, the degree of obsession increased and spread into all aspects of his life, from the mundane to the existential. He absolutely dreaded his sixty-fifth birthday in 1939, because that year was a multiple of 13. He even asked the composer and astrologer Dane Rudhyar to prepare his horoscope. Schoenberg was told that, “the year was dangerous, but not fatal.” In a letter dated 4 March 1939, Schoenberg wrote: “Indeed, I am not so well at the moment. I am in my 65th year and you know that 5 times 13 is 65 and 13 is my bad number. But when this five-times-thirteen year has passed, then I have 13 more years.” Schoenberg’s prophecy, however, did not come to pass.

In 1950, on the occasion of this seventy-sixth birthday, Schoenberg received an ill-omened note from his fellow composer and musician Oskar Adler. Adler stipulated that since Schoenberg’s age of 76 added up to 13 (7+6), it would be a critically dangerous year. According to friends and family, this ominous suggestion severely depressed and stunned Schoenberg. Things finally came to a head on Friday, 13 July 1951. On that day, Schoenberg, sick, anxious and depressed, stayed in bed all day. His wife Gertrud reported, “About a quarter to twelve I looked at the clock and said to myself: another quarter of an hour and then the worst is over. Then the doctor called me. Arnold’s throat rattled twice, his heart gave a powerful beat and that was the end.” Gertrud reported to her sister-in-law Ottilie the next day that Arnold died at 11:45, 15 minutes before midnight. Apparently he could not bear to face the last 13 minutes on a Friday the 13th!