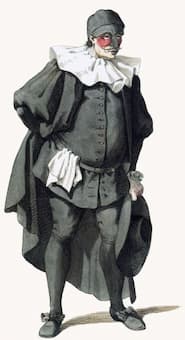 A 2006 article in the British medical journal BMJ looked at 200 years of opera and how they treated doctors. This prompted us to take up the question ourselves. Doctors – good guys or bad guys?

Well, it depends…. Characters with the title of doctor were not always medical, doctors might be academic doctors of learning. Because of the precedent of doctors in early theatre, their appearance on the opera stage had some fore-ordained implications.

In the days of the commedia dell’arte, the role ‘Il Dottore’ was used for old men (vecchi) who lusted after younger women. They were shown dressed in long black academic gowns as a standard costume. The vecchi may have been figures of fun, but they were also figures with power.

Within the commedia dell’arte tradition, the first appearance of Il Dottore as a character has been traced back to 1560. He is a foil to the character Pantalone – Pantalone is the decadent wealthy merchant and Il Dottore the decadent well-educated man. When he was given a full name, Il Dottore often didn’t come off well, especially with names such as Dottore Baloardo (Dr Dolt), Dottore Spaccastrummolo (Dr Hack-and-Bandage), and Dottore Forbizone (Dr Large Scissor). Maurice Sand wrote about the character of The Doctor: ‘sometimes he is very learned, a man of law, a jurisconsult; more rarely he is a physician.’ ‘He can talk on any subject…but he knows absolutely nothing’, Sand goes on to say. He goes on to describe the character of Doctor Balanzoni Lombarda as being ‘particularly a man of medicine, which, however, does not hinder him from practicing alchemy and the occult sciences.’ 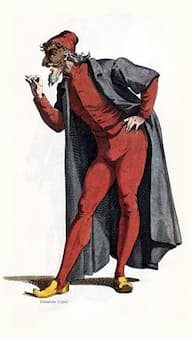 Doctors first came to operatic notice in the 18th century, and from our examples, we can see that doctors were largely authorities and figures of fun.

Doctors first appear in the 1730s in English ballad operas but weren’t necessarily medical doctors. Charles Coffey’s The Devil to Pay (1731, London, Drury Lane) has a ‘doctor’ who, furious at having been refused lodging in two different houses, works some black magic to cause ‘bad-tempered Lady Loverule and sweet-tempered Nell’ to be exchanged in their marital beds by the doctor’s machinations.

The title of Richard Jone’s 1732 ballad opera, The Mock Doctor, sets a model for the century because mock doctors were more common than in their 18th century appearances.

In Haydn’s 1777 opera Il mondo della luna (The world of the moon), there isn’t a character called ‘doctor’ per se, but the lead character, Ecclitico, a bogus astrologer (a mistake by the librettist for astronomer), calls himself doctor at the beginning of Act III. 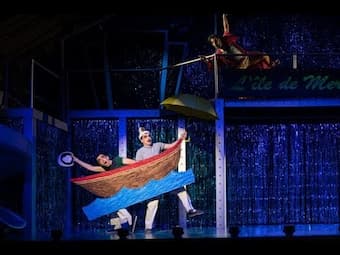 A doctor takes the title role in Domenico Fischietti’s 1758 dramma giocoso, Il signor dottore (The Doctor). Bernardino has returned from university as a doctor of law and his father seeks to marry him off to a woman of a higher rank. All, of course, goes wrong when it’s revealed that Bernardino has not, in fact, been attending university but has been just taking his father’s money. Another mock doctor.

In Gluck’s 1758 opera, L’île de Merlin, ou Le monde renversé (‘Merlin’s Island, or The World Upside-down’), we have the character of Hippocratine, a woman doctor (soprano). She’s part of a group visiting Merlin’s realm that includes a musical philosopher (tenor); an honest lawyer, M. de La Candeur (tenor); a ‘reasonable’ petit-maître (a man with a feminine appearance), the Chevalier de Catonville (tenor); and a notary, M. Prud’homme (bass) – all of whom are inversions of types found in Paris. 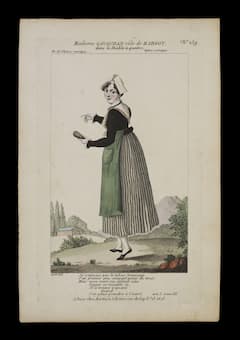 The costume worn by the actress Madame Gavaudan (1781-1850) in the role of Margot in Le Diable à quatre at the Théâtre de l’Opéra-Comique (London: V&A)

In Gluck’s 1759 opera Le diable à quatre, ou La double metamorphose (‘The Devil to Pay, or The Wives Metamorphosed’) Charles Coffey’s 1731 story comes back. In this one, we have class differences: This ‘Doctor’ (tenor) ‘punishes the Marquise by magically transporting her to Margot’s humble cottage (and Margot to the chateau), and by causing their features to be transposed. While the Marquise suffers the indignity of being whipped and forced to work by her ‘husband’ Jacques, Margot marvels at her new surroundings and enchants the Marquis and servants with her reformed character. The Doctor eventually reverses his spell, judging the Marquise sufficiently punished…’. But this doctor, again, is an astrologer/magician.

Another doctor comes in the setting of Beaumarchais’ Figaro trilogy, Giovanni Paisiello set Il barbiere di Siviglia in 1762. Count Almaviva wants to marry Doctor Bartolo’s ward Rosina and is aided in his quest by Figaro the barber. Doctor Bartolo also wants to marry his ward and the battle is on. 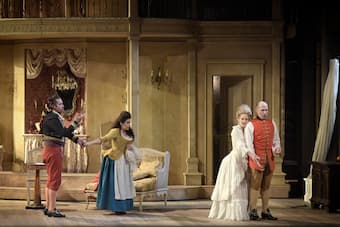 In Mozart’s 1786 Il Nozze di Figaro, which is part 2 of Beaumarchais’ Figaro trilogy, Doctor Bartolo, who hates Figaro for helping the Count get Rosina, wants to interfere in Figaro’s plans to marry Susanna. By setting himself up as the opposition to Figaro, Bartolo is setting himself up for failure. In the end, it turns out that Marcellina, who is being aided by Bartolo in her lawsuit to marry Figaro, is actually Figaro’s mother (and Bartolo his father!).


Our first real doctor identified as a medical doctor appears two months after Mozart’s opera when Carl Ditters von Dittersdorf’s doctor made his appearance on the same stage in Vienna. In Doktor und Apotheker (Doctor and Apothecary), we have two parts of the medical field in opposition. The daughter of Stössel the apothecary (a medical professional who formulates and dispenses medicine) has fallen in love with the son of Doctor Krautmann (a medical doctor). The two fathers are sworn enemies and must be tricked into agreeing to the marriage. Apothecary Stössel’s comic aria is about how the two great historic names of medicine, Galen and Hippocrates, just confuse him.


Our last 18th-century opera with a doctor is Mozart’s 1790 opera Così fan tutte. Sisters Fiordiligi and Dorabella have sent their lovers Guglielmo and Ferrando off to war. Two good-looking Albanians appear (Guglielmo and Ferrando in disguise) come to tempt the sisters to stray from their vows of constancy to their departed lovers. In mock despair, the mock lovers drink a mock poison and in rushes a mock doctor to cure them. The so-called doctor is the sisters’ maid, Despina, who has been aiding the men in their attempts to tempt the sisters to stray. When Doctor Despina enters, she speaks Latin, which everyone declares they cannot understand, and says that she can also speak ‘Greek and Arabic, Turkish and the Vandal tongue… Swabian and Tartar too’. In showing off her language skills, Doctor Despina firmly allies herself in the overeducated buffoon camp.


Through the 18th century, we see doctors as figures of fun to be fooled by their children or wards, doctors as practitioners of black magic who get revenge for slights, or as people with false degrees. A woman doctor appears as a fantasy reversal of the normal world – a woman doctor? Just as impossible, as would be an honest lawyer, if we believe the libretto!

These aren’t all the 18th century settings with doctors, but a good sample of them. It was common for the same librettos to be set over and over, such as Il mondo della luna, which was written by Carolo Goldoni. That text was then set by Baldassare Galuppi (1750), Pedro António Avondano (1765), Giovanni Paisiello (1774 under the title Il credulo deluso, 1783), Gennaro Astarita (1774), Joseph Haydn (1777), Michele Neri Bondi (1790, libretto revised by Domenico Somigli), and Marcos Portugal (1791, in Portuguese, under the title O lunático iludido).

Doctors as a serious character have to wait until the 19th century when Doctor Faust becomes the most prominent representative.