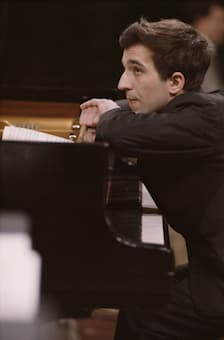 Vladimir Ashkenazy was born on 6 July 1937 in Gorky, presently called Nizhniy Novgorod, a city on the river Volga about 250 miles east of Moscow. The family name Ashkenazy is inextricably connected with Jewish history, in particular with “that part of the Jewish nation which settled in Eastern Europe, Russia and parts of Asia in the centuries after the diaspora.” His father David Ashkenazy was a capable pianist said to have had an “amazing gift for improvisation and for popular and folk music.” He joined a nationwide concert organization called “Estrada” that provided popular entertainment for factory celebrations and party gatherings, and he proved himself to be an exceptionally versatile pianist with a considerable flair for show business. Vladimir’s mother Yevstolia Grigorievna came from a large musical family and studied acting at the Gorky Technicum. She probably met her future husband at one of his Estrada concerts, and they got married “sooner than might otherwise have been considered sensible at that time in Soviet Russia, but a child was already on the way.” 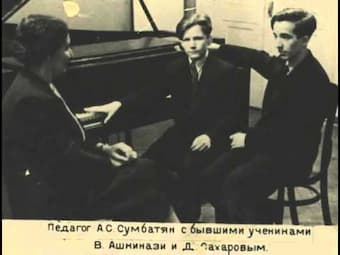 Since his mother came from a Russian Orthodox family, Vladimir was christened in a Russian Orthodox Church. As a schoolboy, Vladimir became aware of his dual heritage and related, “Even though I am half Russian and half Jewish, I actually feel much more Russian. This may have something to do with genes but in fact, it was my mother who brought me up; my father didn’t participate at all in my growing up or education—he was always on tour.” The family moved to Moscow, and their small room featured an upright piano on which his father practiced for his tours. Vladimir remembers, “I myself took very quickly and naturally to the piano and to music; once my first teacher explained to me how to read music, how the lines and dots worked, I began to read it very quickly, and soon could sight-read with unusual ease. This was when I was six…This also happened with the theoretical side of music, including harmony. I only needed the very first clue to put me on the right road, then the rest seemed like second nature.” After only a few months of private lessons with the teacher his mother had found, he made such rapid progress that he was recommended for enrolment in the local district music school. 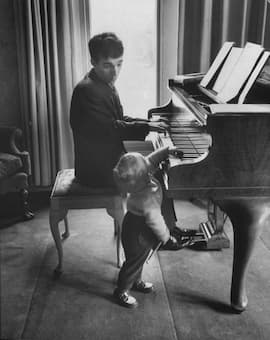 Ashkenazy and his son

The Armenian pianist Anaida Sumbatyan, who taught at the District and Central School of Music in Moscow, quickly spotted Ashkenazy’s talent. Ashkenazy took an examination before a panel of teachers and professors to straight away join the Central School, and he was quickly accepted. Ashkenazy remembers that he always wanted to do as little practicing as possible. “The problem was that I tended to learn the pieces I had to prepare for my lessons very fast, and so after that, I didn’t see why I still had to do more practicing… In the end my parents started buying me all sorts of operas and orchestral works in piano reductions so that I could be sufficiently motivated to sit at the piano, and it worked miraculously.” He also remembers that his parents would sometimes take him to the Bolshoi, where his love for the symphony orchestra originated. “I always liked to sit in a place where I could look over the orchestra pit,” he writes, “I was much more interested in what went on there than on the stage.” 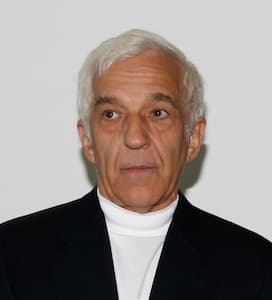 Ashkenazy studied with Sumbatyan, who had been a student of Yesipova, for ten years. Ashkenazy recalled, “when I started taking lessons from her, she had in fact been teaching only for a few years. I owe her a very important debt.” As a scholar writes, “it was soon very obvious that Ashkenazy was the sort of material that any successful teacher hopes to find, and she was certainly ambitious for him.” She was genuinely interested in him in artistic terms, wanting to help him to develop his talent in every way. The pianist recalls, “Working with young children, she was absolutely terrific. She inspired the imagination of her students with all sorts of associative ideas… She also had broad horizons as far as music was concerned. She encouraged me to go to orchestral concerts so that I would learn to think orchestrally at the piano.” 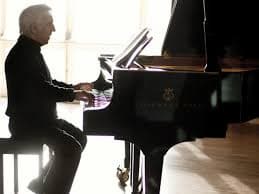 To be sure, “she had a very clear view of the proper priorities for her younger students… As far as the piano itself was concerned, I think it was she who knew how to bring out in me the real feeling of affinity for the instrument. This is partly a technical matter, if you consider sound production and everything to do with how the piano functions, but it was she who made sure that for me all of this became second nature.” Ashkenazy played his first major recital, entirely devoted to Chopin, at the Great Hall of the Moscow Conservatory in April of 1955, and later that year he gained a second prize at the fifth Warsaw International Chopin Competition. He became a student of Lev Oborin in 1956, and he soon was considered the finest of the young Russian players, a once-in-a-generation virtuoso. “He was recognized early on as having all the virtues of a great performer: musicianship, intellectual perception, technical perfection, and musical instincts that never failed to make his fingers say something.”