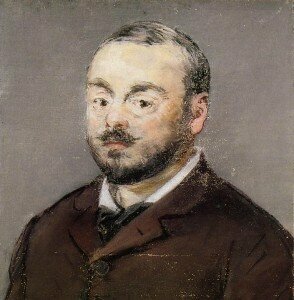 If you hang around in the arts, then you hang around with lots of kinds of artists – musicians don’t just pal around with other musicians but add all kinds of artists into their circles. Some of these circles, such as Les Apaches in early 20th century Paris, included painters (Bénédictus, Klingsor, Sordes), composers and pianists (Falla, Stravinsky, Ravel, Schmitt, Viñes) , writers and poets (Calvocoressi, Fargues), scientists, publishers, and even an imaginary member. 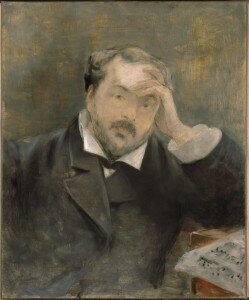 A composer such as Emmanuel Chabrier (1841-1894) was a consummate collector of the art of his friends, mostly Impressionist painters. An auction sale two years after his death included works by the leading artists of the day: Cézanne, Manet, Monet, Renoir, and Sisley. In addition, he also appeared in his friends’ works: Edouard Manet did a Portrait de Chabrier.

And did a painting of him with his music. This was owned by Chabrier and passed down through his family until it was sold in 1923. 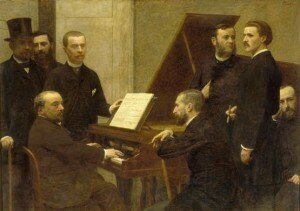 Henri Fantin-Latour depicted him at the piano with a group of musician friends, including Vincent d’Indy, Adolphe Julien, Arthur Boisseau, Camille Benoît, Edmond Maître, and others.

In a painting by Edgar Degas, he’s shown just with the top of his head poking out of the on-stage box at the far right.

Manet delighted in being part of an artistic circle, as shown in another painting where Chabrier appears. This masked ball painting was rejected for the Salon of 1874 and was purchased by the operatic baritone Jean-Baptiste Faure. Manet included many of his friends in the painting and even included himself (2nd from the right, with blonde beard) among the mix of men in black. Chabrier is also on the right in the painting. The opera house where this ball was held is not the familiar Palais Garnier, but the smaller Opéra Le Peletier house, which was burned down in 1873. It was this fire that prompted the removal of the company to the Palais Garnier, where it still resides. 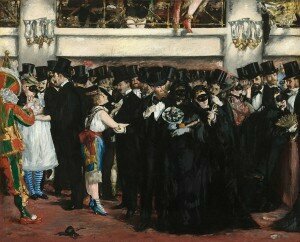 Chabrier had to lay aside his music studies and his impressive pianism for a degree in law. He held a position at the French Ministry of the Interior for some 19 years while at the same time continuing his composition works. We can trace his development of his song style via his association with a set of Parisian poets known as the Parnassian poets, which included Villiers de l’Isle -Adam, Jean Richepin, Paul Verlaine and Catulle Mendès. We’ve seen above how Chabrier and Manet were friends – in addition, Manet’s wife was the dedicatee of Chabrier’s Impromptu of 1873, and Manet served as a witness for Chabrier’s marriage to Alice Dejean. Extending this further, the fortune that his wife brought to him enabled Chabrier to purchase one of Manet’s best-known paintings, Un bal aux Folies bergères, which was Manet’s last major work.

Of Chabrier’s musical works, few are still in the repertoire. His España and the Joyeuse marche are the most performed today. The writing of España followed a trip to Spain he and his wife made in 1882 and in the work he sought to show the various kinds of dances: flamenco, tango, the fashions of the men and women, the different rhythms of the different parts of the country (from his letters: I’ve made notes on lots of things: the tango… is the only one in duple time; all the rest, everything, is in 3/4 (Seville) or 3/8 (Malaga and Cadiz); in the North, it’s different, there’s a very odd 5/8 one. The tango’s 2/4 is always of the habanera type…’)

Chabrier: España (Monte-Carlo Philharmonic Orchestra; Hervé Niquet, cond.)
The Joyeuse marche of 1888, on the other hand, is comic delight. Here, in one 3-minute piece, is the quirkiness of this atypical composer: ‘audacious harmonics, the novel and quirky instrumentation, the almost grotesque consistency of sound’ are all part of the good-natured humour that Chabrier was known for.

Chabrier: Joyeuse marche (Monte-Carlo Philharmonic Orchestra; Hervé Niquet, cond.)
Although Chabrier is no longer in the center of our musical world, the fact that he was in the center of a larger circle of French artists at the end of the 19th century has enriched everyone.