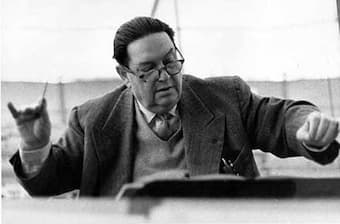 Darius Milhaud, one of the most prolific composers of the 20th century, died in his home in Geneva, Switzerland, on 22 June 1974 at the age of 81. For the last 25 years of his life, Milhaud had been confined to a wheelchair, the victim of rheumatoid arthritis. He referred to his affliction in 1963, saying “I have gotten worse in the past 30 years, and in this past year, the arthritis has stopped me far too much for my tastes.” However, as a citizen of the world, Milhaud continued to be a resolute traveller, and his immersion in different countries and cultures greatly enriched his artistry and nurtured his creativity. 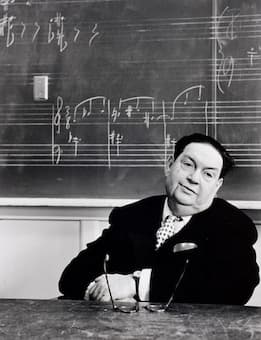 “His work is a unique example of musical syncretism both in his expression and in the means he employed.” His vast output, which spreads across all genres, shows an irrepressible need to write music unhindered by aesthetics or technique. As he explained, “I have never understood how one can talk about different kinds of music, that is inaccurate. There is only MUSIC, that one can find in a popular tune or operetta melody as well as in a symphony, an opera or in chamber music.” To be sure, his music is often bathed in a Mediterranean light combining his Provençal roots and his Jewish spiritual traditions with jazz and other popular music from Brazil, the Caribbean, the USA, and the Middle East. 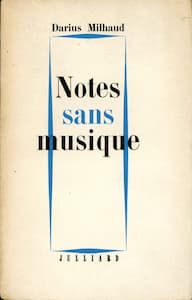 Milhaud published his autobiography Notes without Music in 1949. Aaron Copland commented, “Others write music to express themselves; Milhaud, like no other composer I know, writes music to celebrate life itself.” His celebration of life is documented in more than 400 works, including 12 symphonies, 18 string quartets, 34 concertos, 15 operas, 19 ballets and 25 film scores. Forces to escape from Nazi persecution in 1940, he emigrated to the United States and secured a teaching post at Mills College in Oakland, California. He was among the founders of the “Music Academy of the West” summer conservatory, and he also taught on the faculty of the Aspen Music Festival and School. As a pedagogue, Milhaud had no aesthetic rules, or philosophy or theory. “I love to write music,” he explained. “I always do it with pleasure, otherwise I just do not write it. Naturally, there are certain types of work that I prefer, but a composer should do everything with application, with all the resources of contemporary technique at his disposal. He can then hope that, after a life of hard work, he will see some works survive.” 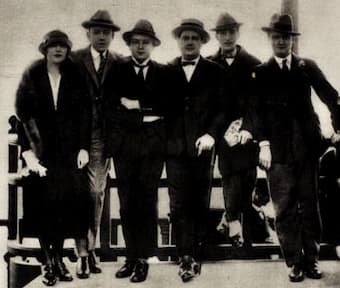 Milhaud as part of Les Six

Milhaud taught a number of future jazz and classical greats, including Burt Bacharach, Dave Brubeck, Philip Glass, Steve Reich, Karlheinz Stockhausen and Iannis Xenakis, among others. He seemed to have followed two pedagogical approaches in his teaching. “On the one hand, he used the strictest Paris Conservatoire method when it came to counterpoint: no rules could be broken. When it came to harmony or matters of composition, however, there were no rules.” According to the Milhaud student, Bill Smith, Milhaud’s favorite sayings were “Dare!” and “Why not?” He urged his students to “keep their ears as well as their eyes open while traveling the world, and to be cognizant of the various sounds, rhythms and fragments of melody that envelop us night and day.” Milhaud inspired his students by strength of character. As a scholar wrote, “In an age of cynicism, Milhaud remained intensely interested in all forms of human expression, even those outside his own aesthetic.” And a former student recalls, “Milhaud helped you to become a better composer, no matter what your bent, twelve-tone, atonal, jazz or whatever. He was a humanist and a sybarite, a man of culture who loved life. He had every reason to become misanthropic, his family and race nearly suffered extinction, and he was confined to a wheelchair with a crippling disease most of his life. Yet, he remained happy and hopeful.” 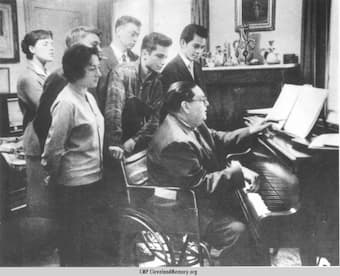 During the process of composing, Milhaud never changed a note once it was written down on paper. There were no sketches, rough drafts, or notebooks. He did not compose at the piano, “but simply wrote swiftly, as if transcribing from another copy, having the piece firmly in his head.” Milhaud always refused to discuss his compositional style, insisting, “Every work brings its own style, and its own form.” When pressed as to what really inspired his music, Milhaud pointed to his fountain pen. “That’s my inspiration,” he said, “I can’t work with pencil.” Shortly before his 73rd birthday, Milhaud conducted the New York Philharmonic in performances of his 10th Symphony. A critic wrote, “It was an understandable combination of sentiment and respect that moved the orchestra and the audience to rise when Mr. Milhaud came onstage, walking laboriously with the aid of two canes. The tribute was as much to the man as to the composer. His hair is still jet-black, but his pale features reflect the poor health that has plagued him for years. Once he seated himself on the podium, however, his pallor seemed to vanish, just as his canes were forgotten. His vigorous conducting gave the impression of a bottomless resource of energy.”