Features
The Alchemy of a Symphony Orchestra
by Janet Horvath April 6th, 2019 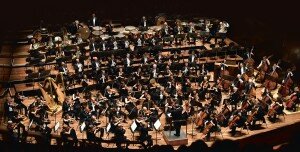 What alchemy produces the unique sounds of a symphony orchestra? When approximately 100 musicians play together the resultant fusion reverberates into our souls.

The strings form the backbone of the orchestra and are the largest group. Over the centuries the violins, violas, cellos, and double basses have maintained a presence in the orchestra even while new instruments have come onstage.

The violinists are the divas of the orchestra, sometime the players are too—the instrument that most of the time has the melody. The violin has a soul expressing all states of human emotion with remarkable power to consoles us and strengthen us. They also are the virtuosos of the group.

Schumann: Symphony No. 2 in C Major, Op. 61 – II. Scherzo: Allegro vivace
Viola players are the brunt of orchestral jokes. “What’s the similarity between lightning and a violist’s fingers? They never strike the same place twice!” Violists tend not to be outgoing personalities. Their instrument is larger, heavier, and therefore more awkward to play than the violin and tuned like the cello with a C string. The viola is often relegated to accompaniment figures, often the offbeats of the bars, but their silken, melancholy sonorities enrich the melody. When they are featured they do sound gorgeous. In Don Quixote by Strauss the viola plays the role of the sensible sidekick Sancho Panza. 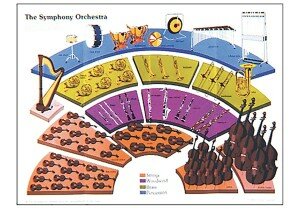 One of the most versatile instruments the cello, is chocolaty rich, smooth, and resonant. Cellists for the most part are warm and mellow like their instruments. Don’t be fooled when you hear the cello shimmering like a violin in the uppermost registers, sound like a tenor yearning for love in the middle harmonies, and resound like a baritone powerfully, deeply. The cello often has the main line as in Brahms’ Symphony No 2, second movement.

Brahms: Symphony No. 2 in D Major, Op. 73 – II. Adagio non troppo
Debussy’s La Mer begins gently, then the sea churns and calms. Five minutes in, the cello section enters, divided into four different lines with an iridescent effect. A cello solo with oboe, purrs towards the end of the movement.

Debussy: La mer – No. 1. De l’aube a midi sur la mer
Double bass players usually sustain the bottom lines and the entire hall can reverberate from their lowest, brooding tones. But they can be surprisingly nimble. Listen to this excerpt from Verdi’s opera Othello, setting the horrifying tone right before the murder of Desdemona.

Beethoven also features the basses, with the cellos, in the famous recitative of the last movement of his 9th Symphony. 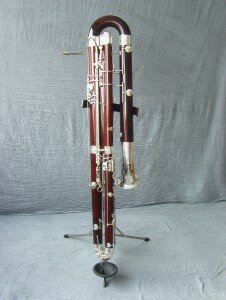 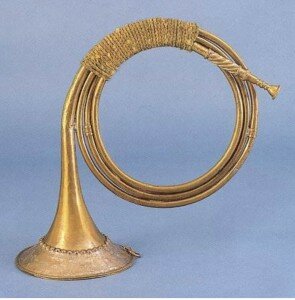 Coiled Trumpet by Steinmez, Imperial City of Nürnberg, before 1694
© http://collections.nmmusd.org

Oboe players sometimes seem neurotic. To produce a sound, they have to use a great deal of air pressure—perhaps it affects their brain? But even more they are driven crazy by the endless hours they have to spend making reeds—the piece of cane, which serves as their mouthpiece, and has to be hand-carved to suit the player.

Ravel: Le tombeau de Couperin – No. 1: Prelude
Longer in shape and deeper sounding, the English horn has a radiant and unique sound especially in the famous solo in Dvorak’s New World Symphony, slow movement, but also in this stunning piece, Sibelius’ Swan of Tuonela.

The clarinet can be both playful and serious. They use a single reed attached to their mouthpieces, but we tend to hear less complaining about them! An instrument with an extensive family, including the E-flat clarinet, the piccolo clarinet, the basset horn, the bass clarinet, and contrabass clarinet, the entire weight of the instrument lies on the players’ right-hand thumb and sometimes results in injury over time. The sound is controlled by the lips or embouchure, and the air flow. This famous opening to George Gershwin’s Rhapsody in Blue is an iconic moment for the clarinet with the use of a glissando.

Gershwin: Rhapsody in Blue
Like the viola, the bassoon is joked about. Yes, it burns longer than the oboe… The clowns of the orchestra—think of Mickey Mouse in Fantasia, or the grandfather in Peter and the Wolf. It is the largest woodwind and lowest in pitch. The bassoon belongs to the oboe family because of its use of a double reed—two pieces of cane tied together. They make their own reeds too. The contrabassoon is folded over several times so as to maintain similar fingerings as the bassoon, and manage the over 16 feet of tubing. Sometimes sounding like a burp, their low A-flat is one-half step lower than the lowest note on the piano! Stravinsky broke the mold when he opened The Rite of Spring with a very high, beautifully melodic solo for the bassoon. The beginning uses almost every woodwind instrument we can think of including two contrabassoons.

The brass, considered the macho group of instruments, can drown out the entire orchestra. The trumpet is probably the most familiar. This coiled trumpet from 1694 is believed to be the precursor to the French Horn. The instrument can be traced back thousands of years, and plays the highest notes. Czech composer Janáček’s Sinfonietta calls for 12 trumpets. 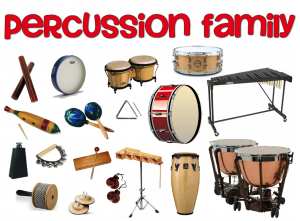 Janáček: Sinfonietta, JW VI/18 – I. Allegretto
The range of the French horn is close to the cello’s mid-range and therefore the two instruments frequently play similar lines of the music. In Strauss and Tchaikovsky, the horns are prominently featured like the famous horn solo from Tchaikovsky’s Symphony No. 5 slow movement.

And here is a wonderful piece you may not know by Schumann, showing off four solo horns.

Schumann: Concertstuck in F Major, Op. 86 – I. Lebhaft
Brahms’ Symphony No. 1 begins with a solemn slow introduction. Within 3 and ½ minutes into the movement we hear a glorious trombone chorale.

Brahms: Symphony No. 1 in C Minor, Op. 68 – IV. Adagio – Allegro non troppo ma con brio
There is a magnificent trombone section solo in Mahler’s Symphony No. 2. Here’s an excerpt from the 90-minute symphony.

The tuba sits way at the back and is rarely featured. I thought it would be fun to bring him forward. A virtuoso tuba player can do amazing feats as a soloist. Here’s John William’s Tuba concerto.

The percussion, consists of an enormous variety of instruments—the timpani, harp and keyboards such as the celeste; all forms of drums, bass drum, snare drum, castanets, triangle, tambourine, cymbals, xylophones, vibraphones, marimbas, bells, or basically anything one can hit to make a sound! Percussion sections make a lot of noise. The bass drum produces 70 percent of the sound onstage. In La Noche de los Mayas, by Mexican composer Revueltas one can hear the bass drum and gong immediately, as well as several ethnic instruments—tom toms, bongos, congas, and rattles, a guiro (a notched gourd), caracol (a conch shell) and tumkul (a log drum), timpani, snare drum and xylophone.

Bruckner builds the tension relentlessly to a hair-raising climax in his Symphony No. 4.

Bruckner: Symphony No. 4 in E-Flat Major, WAB 104, “Romantic” – IV. Finale: Bewegt, doch nicht zu schnell
The resonance we hear from an orchestra is affected by the type of instruments called for in the musical score, the performance of the musicians, the leadership of the conductor, the acoustics of the concert hall, and the receptiveness and participation of audience. Each performance is unique. Together, the instruments of the orchestra make magic. Don’t you agree?