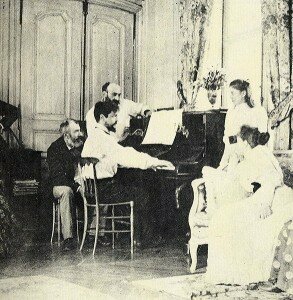 Debussy at the piano

Claude Debussy’s friend Paul Dukas candidly wrote “the strongest influence to which Debussy submitted was that of the littérateurs, not that of the musician.” And while most of us have no problems describing Debussy as an “Impressionist,” a term originating in connection with a group of painters, and one that Debussy severely disliked, it was the language of the Symbolist poets that originally fueled his imagination. Their interest in the sonic mysteries of language suggested an inherent musicality in the arrangement of words. The foundation of Symbolism clearly reaches back to the art of Charles Baudelaire, whose dream-like images suggested the mystery of existence.

Nature is a temple where living pillars
Sometimes unleash a confusion of words;
Man traverses it through forests of symbols
Which observe him with knowing glances.

Like extended echoes which mingle far away
In a mysterious and profound unity,
Vast as the night and as light,
Perfumes, colors and sounds answer each other… 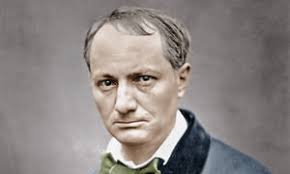 Claude Debussy: Cinq poèmes de Charles Baudelaire
Debussy’s settings of Baudelaire, as you can easily hear, shimmer with the sensuous musical glow of Richard Wagner. In fact, Debussy made two pilgrimages to Bayreuth, and he responded positively to Wagner’s sensuousness, mastery of form, and striking harmonies. It has been suggested that while Debussy was no traditional heir to Wagner in Pelléas et Mélisande,“his possession and transformation of Wagner give him substantiality, signification, and depth.” Of course, Arnold Schoenberg vehemently disagreed and wrote, “Here is a remarkable fact, as yet unnoticed: Debussy summons to the Latin and Slav peoples, to do battle against Wagner, was indeed successful; but to free himself from Wagner—that was beyond him.” Without doubt, Debussy was searching for what Eric Satie called “a music of our own—preferably without sauerkraut.” In his Ariettes Oubliées on texts of Verlaine, Debussy employed alternatives to Wagnerian chromaticism by introducing modality and sliding parallel chords. In the process he created one of his most radiant alliances between poetry and music.

A fellow student candidly commented on Debussy’s abilities as a pianist. “He used to astound us with his bizarre playing. Whether it was through natural maladroitness or through shyness I don’t know, but he literally used to charge at the piano and force all his effects. He seemed to be in rage with the instrument, rushing up and down it with implosive gestures and breathing noisily during the difficult bits.” And his piano teacher Marmontel wrote, “Debussy isn’t very fond of the piano, but he loves music.” Regardless, the piano became a central vehicle of Debussy’s creative output. Significantly, the Suite Bergamasque forecasts his own inventions for the instrument and points the way to a French preoccupation with neoclassicism in the 1920s.

In 1903, Debussy remarked, “Wagner was a beautiful sunset mistaken for a dawn. There will always be periods of imitation or influence whose duration and nationality one cannot foretell—a simple truth and a law of evolution. These periods are necessary to those who love well-traveled and tranquil paths. They permit others to go much further.” Much has been written about Prélude à l’après-midi d’un faune with regard to Mallarmé’s extended poem and Debussy’s musical setting. Regrettably, it’s still a matter of convention to read Debussy’s score as a direct parallel to Mallarmé’s poem. Debussy rather forcefully wrote 2 years after the premiere of the work. “The Prélude à l’après-midi d’un faune dear Sir, might it be what remains of the dream at the tip of the faun’s flute? More precisely, it is a general impression of the poem, for if music were to follow more closely it would run out of breath.” Although the number of lines of the poem is identical to the number of measures in the score, it is clearly not a word-by-word translation. One thing for sure, the spell of Richard Wagner was broken for good, and Pierre Boulez decidedly claimed, “Modern music was awakened by L’après-midi d’un faune.”