Features
Instruments of the Orchestra X: The Trumpet
by Maureen Buja June 16th, 2015 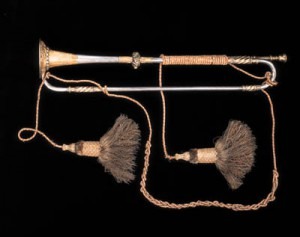 The next of the brass winds is the trumpet, which developed much on the same lines as the horn: first a simple structure, then with the addition of valves, an instrument more suited for ensemble work was created. The process of taming an instrument meant for the outdoors for use in an indoor space took many centuries. This natural trumpet from the mid-18th century still has its decorative tassels. The trumpet would have been played by someone standing. The wrapping around the tube hides a block of wood that supports and separates the tubes. See the video of Alison Balsom below for a beautiful example of a trumpet with additional tuning holes being played.

In this painting of Gottfried Reiche, chief trumpeter for Johann Sebastian Bach in Leipzig, we can see how the length of the trumpet has been curled so that it can fit in his hand better, and, so that it can be more easily played indoors

As with the horn, by the mid-19th century, the trumpet had valves and could more easily become part of the orchestral ensemble. 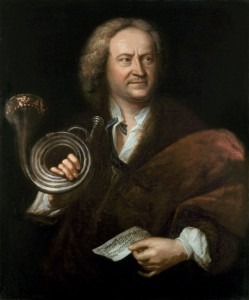 The trumpet is rarely used for delicate melodies in orchestral music because the woodwinds can handle those. It’s used, on the other hand, for driving melodies, fanfare-like melodies, and points of high tension. Even when it’s supposed to be soft, as in Leroy Anderson’s Trumpeter’s Lullaby, there’s still an element of fanfare:

Handel: Ode for the Birthday of Queen Anne, HWV 74: Eternal Source of Light Divine (Eberhard Buchner, tenor; Berlin Chamber Orchestra; Dietrich Knothe, Conductor)
One interesting use is in Shostakovich’s Piano Concerto No. 1 from 1933, which also includes an important part for trumpet. This was written for Alexander Schmidt, the principal trumpet of the Leningrad Philharmonic. Listen, in particular, to the last minute of the last movement where the trumpet adds its flourishes.