Features
Instruments of the Orchestra V: The Flute
by Maureen Buja April 2nd, 2015 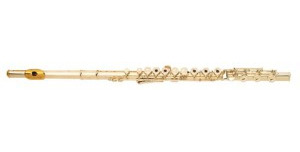 Once we get out of the string section, we enter the wonderful world of the woodwinds. Later we’ll explore the brass winds and then the loudest section, the percussion.

The flute has a long history, going back to pre-time when the first person put his two hands together and blowing between his thumbs made a sound. And so the flute makes a sound the same way today: air, blown across a hole, is divided and vibrates. You can do the same thing blowing across the top of a bottle – the size of the bottle determines the pitch of the note. With a flute, there are holes cut into the body than can be opened or blocked, and that determines the pitch of the note. As flute became more refined, the holes became more complex: some keys have open tops, others have closed and some are not controlled directly but are closed or opened by a key that is close under the fingers. Most concert flautists play with open-hole keys, as it’s felt that it helps give a louder sound in the lower register.

Although the flute repertoire in the orchestra is mostly for the regular-sized flute, there are other works that require the piccolo (“the little one”), or lower flutes, such as the alto or tenor flute (see LINK for an overview of all kinds of flutes). The piccolo is used for all kinds of accent sounds: it appears in the storm scene in Beethoven’s Sixth Symphony (listen around 02:04 where you’ll hear the shrill piccolo driving through the orchestral sound),

Beethoven: Symphony No. 6 in F Major, Op. 68, “Pastoral”: IV. Thunderstorm. (Israel Philharmonic Orchestra; Zubin Mehta, conductor)
and it’s a prominent part of the final section of Sousa’s The Stars and Stripes Forever march (listen around 2:08 where the piccolos provide a high counter melody above the melody in the low brasses).

Sousa: The Stars and Stripes Forever. (Royal Artillery Band; Keith Brion, Conductor)
The regular flutes are used to set up scenes of calm beauty, such as Gluck’s Dance of the Blessed Spirits from Act II of Orfeo and Euridice or in Tchaikovsky’s Dance of the Toy Flutes divertissement in The Nutcracker.

Mozart – Concerto for Flute and Orchestra No. 1 in G major, K 313
Emmanuel Pahud