Composers Inspiration
“If music be the food of love, play on.”
Shakespeare and Music VIII – Othello
by Janet Horvath April 10th, 2016 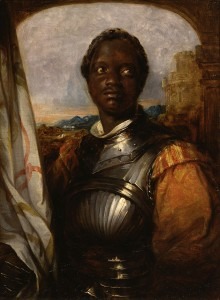 Othello has long been a seductive Shakespeare tragedy, adaptable to our present day life with its enduring leitmotifs—love, mistrust, duplicity, racism, retaliation and remorse.

Perhaps the most famous adaptation of Shakespeare’s play is Giuseppe Verdi’s opera Otello. When Verdi was over sixty years old he became disenchanted with the compositional styles morphing around him. His ambitions waned. Enjoying his villa, Verdi was content with retirement. He hadn’t written an opera in ten years. Two long-time friends approached Verdi—his publisher Giulio Ricordi, and librettist Arrigo Boito—with the idea of convincing Verdi to return to Shakespeare for inspiration. It had been decades since the success of Verdi’s most popular operas Aida, Rigoletto, La Traviata, and Il Trovatore and forty years since the Shakespeare inspired drama Macbeth. Perhaps Otello, which is now considered to be one of his greatest operas, would never have been written without their influence. 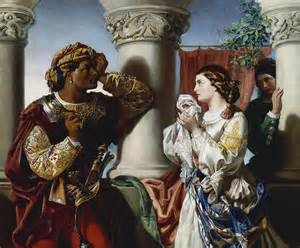 Othello And Desdemona by Daniel Maclise

Otello preceded Falstaff, his twenty-eighth and last opera. The first performance of Otello took place in 1887 in Milan’s La Scala and has been performed in renown opera houses and with leading opera stars ever since. Verdi, with librettist Arrigo Boito, created a thrilling and moving theatrical experience in this four-act work.

Otello: Act I: Una vela! Esultate!
The story is timeless. The Moor Otello, an outsider, has married Desdemona against her father’s wishes. Otello, a mercenary in the service of the Venetian Army, has been sent to Cyprus to repel an invasion by the Turks. His ensign, Iago, affronted due to Cassio’s promotion over him in rank, vows revenge. Iago’s malevolence induces him to destroy Otello. Iago falsely implicates Desdemona, Otello’s wife, and Cassio, a disgraced Venetian officer, as lovers. Otello cannot contain his rage and jealousy and descends into madness, finally committing murder.

Librettist Boito eliminated Shakespeare’s first act and minimized the racial overtones of the original play. The opera writing demands three exemplary singers in the leading roles. Otello in particular is a challenging role for any singer requiring musical subtlety, and control as well as power and brilliant acting. The orchestra takes on a much more prominent and intensely dramatic part in the tragedy than was customary for Italian opera.

The Death of Desdemona by Eugène Delacroix

Otello: Act IV: Ave Maria
The powerful opening storm scene includes high piccolo, organ and frenzied strings. In fact the haunting orchestral palpitations as Otello dies ends the drama. But the arias too are transcendent. Desdemona’s “Ave Maria”—perhaps a salute to Rossini’s Othello—attests to her purity and innocence. The music of the menacing character Iago is visceral with its chromaticism, and staccato rhythms—short and hard. Although Iago stealthily switches allegiances like a chameleon, his devilish musical motif infiltrates, musically divulging his true intentions.

Otello: Act II: Credo in un Dio crudel, “Iago’s Credo” (Iago)
The legendary conductor Arturo Toscanini, who was also a cellist, played in the orchestra at the premiere. “Otello is a masterpiece,” he said. “Go on your knees, Mother, and say ‘Viva Verdi.’”

Gioachino Rossini of William Tell fame wrote his opera Otello, which premiered in 1816 in Naples. In three acts with an Italian libretto, it occurs in Venice instead of taking place in Cyprus. There are other deviations from the original. The male characters—Otello, Iago and Rodrigo are all written for tenor voices, and while Rodrigo is a lesser character in Shakespeare, in this opera he has by far the most dazzling and challenging music to sing. Three years after the premiere Iago’s part was reconfigured for baritone and has been sung by baritones ever since. The Willow Song is especially heartrending. “Alas! I cannot continue for weeping. Leave me, but first receive a last kiss from the lips of your friends.” Rossini’s Otello marked a huge step forward in the history of opera as musical theater and became the standard to emulate.

In 1892 Antonin Dvořák composed his Concert Overture to Othello Opus 93b as part of a trilogy entitled “Nature, Life and Love.” The famous Carnival Overture op. 92 is part of this set. The overture begins slowly and ominously in the upper strings. The flute and harp interject, a lonely clarinet enters, then tumultuous emotions intensify the work. It is beautiful but not often performed.

Dvořák: Othello, Op. 93, B. 174
During our modern era there have been several dance interpretations of Othello. In 1949 Mexican choreographer José Limón set his work The Moor’s Pavane to the music of Henry Purcell. Rudolf Nureyev danced the role and it has become a standard of modern dance repertory. The Hamburg Ballet has performed another Othello ballet set to the music of Arvo Pärt and Alfred Schnittke by choreographer John Neumeier, over 100 times.

There is a brilliant full-length ballet in three acts choreographed by Lar Lubovitch to music by Elliot Goldenthal. This Othello written in 2002, has been broadcast on PBS’s Great Performances and nominated for an Emmy award. The American Ballet Theater has performed this highly successful work in New York City at the Metropolitan Opera House, and the San Francisco Ballet has staged it as well. It is riveting with spectacular costumes, spellbinding multi-media projections and a fascinating score.