Features
Instruments of the Orchestra XI: The Trombone
by Maureen Buja July 9th, 2015 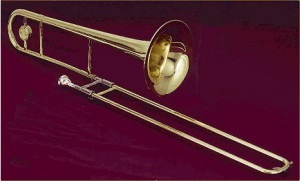 The trombone, or large trumpet (Tromba= trumpet, -one= suffix meaning ‘big’) in Italian, is a lower voice in the brass wind ensemble. Unlike the trumpet that started as a simple tube and now has valves, the trombone was always operated with a slide. This allows the player to change the pitch of the instrument by changing the length of the instrument. The same thing can be accomplished with valves, but the slide allows an infinite number of degrees of change. The problem of reaching the lowest note depends on the length of your arm!

Actually to conquer the arm-length problem, even early trombones had extension handles, as shown in this woodcut from Michael Praetorius’s illustrations for his 1620 Syntagma musicum (Treatise of Music) 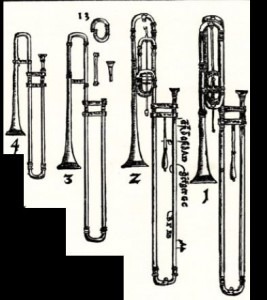 What you will also see in orchestras is the more complex bass trombone that has valves for switching the instrument between Bb, F, and Eb so that it has a greater flexibility in the kinds of music it can play.

The usual orchestral line up is two tenor trombones and one bass trombone and this has been set since the mid-19th century.

But, the great fun of the trombone is that slide – because it can, literally, slide between notes, it has all the possible notes of a scale at its disposal. This is shown off to great advantage in Henry Fillmore’s band piece, Lassus Trombone, where you can hear all the swoops and slides that the trombone does so well: 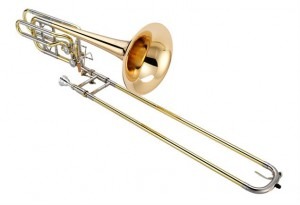 Fillmore (1881-1856), a band composer and conductor, took his fame from writing for the trombone and wrote a set of 15 pieces that all feature that distinctive trombone slide (or smear, as it is sometimes called). Titles included Miss Trombone, Teddy Trombone, Lassus Trombone (above), Shoutin’ Liza Trombone (which opens with a quote from the “Hallelujah” Chorus), Hot Trombone, and others.

There’s always a place for the trombone in band music, but in orchestral music, its role is a bit more hidden, as we have seen with other bass instruments (cello, double bass, bassoon). In the Classical period, the trombone was used in Austria, but rarely in other places. Leopold and Wolfgang Mozart wrote music pairing the trombone with the voice, but it was up to Beethoven to give it a real role in the last movement of his Symphony No. 5. He also used it in Symphony No. 6 and 9, but in no others.

By the 19th century, however, the Romantic composers used trombones in operas and symphonies, as well as other orchestral compositions. In sacred music, the trombone’s role was to support the lower vocal lines, which were often difficult to hear.

In the 20th century, the trombone gained more importance in the orchestra with prominent parts in works by the majority of the mainstream composers, from Mahler to Bartòk. The rise of recordings also meant that there started to be a more unified trombone sound: the German/American sound became the norm and the English and French sound dropped away. 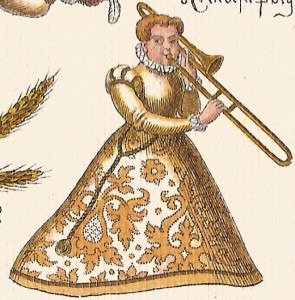 In the 20th century as well, there was a resurgence in use of the trombone in solo and chamber works. Luciano Berio’s Sequenza V for solo trombone shows how the trombone could be used as a solo voice. As it growls and barks, slides and shivers. 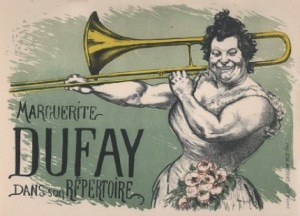 The music for the modern trombone show the versatility and range of the instrument and lift it out of its previous supporting role and into the spotlight.

The most notable modern player is Swedish trombonist Christian Lindberg – he has been called the first full-time trombone solo artist. In his extensive recording career, he’s covered nearly every genre of trombone music, including writing many significant pieces himself. His list of his 100 favorite trombone works can be found (here.

And, lest you think that the trombone is only a mens’ instrument – musical iconography from the 16th century till today have always had women trombonists:

And a famous image from late 19th century France: Marguerite Dufay as painted by Louis Anquetin. Miss Dufay performed in many of the music halls of Paris, as a comique excentrique entertainer.