Features
Instruments of the Orchestra IX: The Horn
by Maureen Buja June 5th, 2015 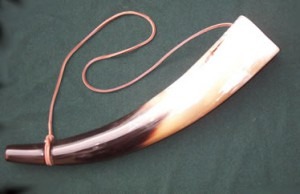 In the back of the orchestra are the brass-winds: the wild brass instruments that have been tamed and brought into the orchestra, but who remain with the potential to put a wild call out over the rest of the ensemble.

The horn, also called the French horn, first made its name on the hunting trails of Europe. To give signals across a distance, the horn was ideal and was originally made from, as the name implies, a cow’s horn.

The problem, of course, is that hunting horns could be any size and make any sound, usually cow-like. Making horns in metal meant that you could control the length and therefore the pitch of the instrument. 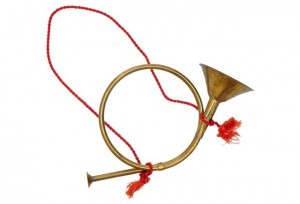 When the horn began to be used in ensemble music, it was necessary to make the pitch adjustable – and the easiest way was to make the length of the horn adjustable.

With all of these pipes, Called crooks, the horn player was perfectly placed to play anything in the music, but only as long as the player had the time to take his instrument apart for every key change. This lasted until Meyerbeer’s opera Les Huguenots in 1836, where the hornists were no longer able to change crooks quickly enough and the horn has to lose its crooks and gain keys. 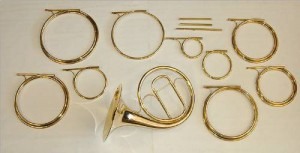 You’ll see that the horn has gotten very complicated – now, all the various crooks are incorporated into the instrument and each key engages a length of tubing. Using two or three keys increases the length.

As the horn developed, composers took advantage of its new shape and began to write music that exploited it. One of the most famous horn solos is in Richard Strauss’ Till Eulenspiegel’s Merry Pranks (starting at 00:24)

R. Strauss: Till Eulenspiegels lustige Streiche (Till Eulenspiegel’s Merry Pranks), Op. 28, TrV 171 (Bavarian Radio Symphony Orchestra; Mariss Jansons, Conductor)
The song-like sound of the horn was beautifully used by Benjamin Britten in his Serenade for Tenor, Horn, and Strings, Op. 31, where the opening Prologue is an extended horn solo 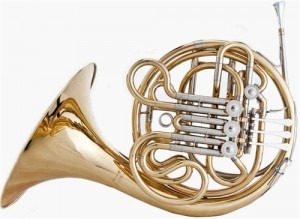 Britten: Serenade for Tenor, Horn, and Strings, Op. 31: Prologue (Michael Thompson, horn)
Britten’s work, written in 1942, was commissioned by Dennis Brain, a gifted 21-year-old English horn virtuoso, whose life was cut short by a fatal car accident in 1957. In later movements of the Serenade, such as the Nocturne, the tenor and the horn exchange lines, each seeming to challenge the other to greater heights.

Going back in time, the heroic sound of the horn was used by Wagner in the third of his Ring Cycle operas, Siegfried. At the beginning of the third act, Siegfried makes an extended horn call to bring the dragon Fafner out of his cave for their fatal fight.

Whether it’s used for its heroic or its song-like quality, the horn provides a very beautiful brass sound to ground the brass winds. At the same time, the horn can be temperamental – many a concert has been tainted by a terrible sound coming from the horn section where they’ve missed notes or crack notes or screw up completely. Sometimes their earlier wild natures come to the fore!