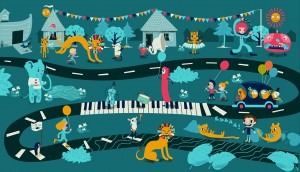 Carnaval of the Animals
Credit: http://www.andreainnocent.com/

When you’re tired of the television jingles and interminable repetitions of “The Wheels on the Bus,” you’re ready to explore the world of music that appeals to children. Much as we wish they would love the music that stimulates our own musical tastes, we do better to look to simpler music for them.

Claude Debussy (1862-1918) wrote his Children’s Corner Suite between 1906 and 1908. He wrote the works for his daughter Emma-Claude, who was born in 1905 and outlived her father only by a year. The influence of Debussy’s liking for things English and of Emma-Claude’s English governess can be seen in the English titles for the works.

The piano piece was later orchestrated by André Caplet but in its piano version, we can just imagine Debussy at the piano with his daughter at his feet.

The last movement is Golliwogg’s Cake-Walk a sprightly version of a well-known dance that had been popular in France in the 1890s. To satisfy a deeper aesthetic sense, there’s a brief passage in the middle that parodies the opening of Wagner’s Tristan und Isolde (starting at 1:20). 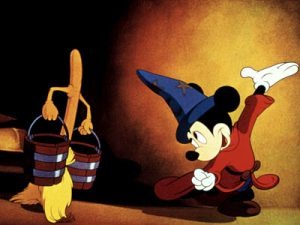 Camille Saint-Saëns (1835-1921), wrote his Carnival of the Animals in 1886 to celebrate that year’s carnival. Originally written for 2 pianos and small chamber orchestra, Saint-Saëns’ ‘zoological fantasy’ was later revised for full orchestra. The animals are the usual ones that might be found in the zoo: lions and tortoises and kangaroos, and then start to go a bit funny, with movements for People with Long Ears, Pianists, and Fossils, not normally found in zoos. The movement for the pianists starts with some heavy scale work familiar with everyone who tackles the big black giant:

Saint-Saëns: Carnival of the Animals: XI: Pianists (Slovak Radio Symphony Orchestra; Ondrej Lenard, cond.)
The final animal, The Swan, has become of the most favorite movements of this work.

Saint-Saëns: Carnival of the Animals: XIII. The Swan. (Yo-Yo Ma, cello; chamber ensemble)
Maurice Ravel (1875-1937), wrote his Mother Goose Suite as a piano duet to entertain the two children, aged 6 and 7, of a friend. It was orchestrated and made into a ballet score in 1911. The story of “Little Ugly,” Laideronette, comes from the tale of the birth of 2 princesses, one of whom is cursed by a fairy who was not invited to the party. Since the little girl is supposed to be the ‘empress of the pagodas,” Ravel has used an unusual harmony made up of the intervals of perfect, augmented and diminished fourths.

Ravel: Ma mère l’Oye: III. Laideronnette, impératrice des pagodes (Tiziana Moneta, piano; Gabriele Rota, piano)
The last piece for children gained its fame from its setting as a cartoon by Walt Disney as part of his 1940 extravaganza, Fantasia. Paul Dukas (1865-1935) wrote his symphonic poem, L’apprenti sorcier (The Sorcerer’s Apprentice), in 1896-97, based on a poem of the same name by Goethe. This cartoon, with the helpless Mickey Mouse as the apprentice for whom everything gets a bit out of hand, was the first of Disney’s classical music animations and became the core and one of the best-known of the Fantasia stories. You can’t really forget those broom marching mercilessly onward, doing what Mickey told them to do, not what he wanted them to do.