The double bass is large – with a total height from endpin to scroll of six feet. Unlike the smaller string instruments, the double bass has had to have some modifications to help with performance. To play a double bass, the bassist sits on a tall stool (or stands), and leans the instrument back against his body. To play the high notes on the outermost string the bassist has to practically hug the instrument, wrapping his arms around it. As a consequence the shoulders of the double bass are sloped to enable the bassist to reach those notes. 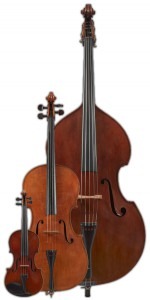 Another change that you’ll see in the modern bass is the “C extension,” which adds 4 more notes to the bottom of the range. This extension continues the fingerboard for the lowest string for special pieces such as Respighi’s Pines of Rome that require the extended range.

Because the double ass is such a specialized instrument, generally used for supplying the bass support for music, the number of well-known classical bass players is actually quite limited. And, as a strong contrast with the higher stringed instruments, all of the important players in this list are also composers for their instrument. 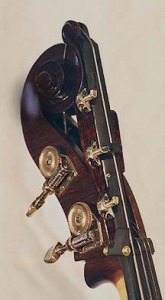 Dragonetti’s Double Bass Concerto has an Allegretto second movement that really makes you imagine the lumbering bass nearly dancing across the stage:

Dragonetti: Double Bass Concerto in G Major, D. 290: II. Allegretto (Ubaldo Fioravanti, double bass; Padova e del Veneto Orchestra; Claudio Martignon, Conductor)
Giovanni Bottesini was not only a virtuoso bassist but also an internationally famous conductor and was known to conduct an opera and then follow it by a double bass fantasy built on the themes from the opera.

Bottesini: Fantasia on Bellini’s Norma. Alberto Lo Gatto, double bass; Luca Antoniotti, piano)
Another bassist / conductor was Sergey Koussevitzky, who was best known as music director of the Boston Symphony Orchestra from 1924 to 1949.

Koussevitzky: Double Bass Concerto, Op. 3, III. Allegro (Ivan Sztankov, double bass; Budapest Symphony Orchestra; János Kovács, Conductor)
Edgar Meyer, in many ways, is representative of the modern bassist: comfortable in both classical and non-classical environments. While he is the one bassist in this list who doesn’t have another career as a conductor, he does have other careers in jazz, bluegrass, and other popular genres. Some of that influence can be heard in his own Double Bass Concerto.

Meyer: Double Bass Concerto in D major: III. Quarter note = 190 (Edgar Meyer, double bass; Saint Paul Chamber Orchestra; Hugh Wolff, Conductor)
A recent video of Edgar Meyer playing will show you how a stand-up bass player uses the elements of his instrument: you can see the c-extension on the top of the fingerboard, and you can also see the extension on the fingerboard so that he can play higher-than-usual notes on his top string. You can also see why the top of the double bass needs to be sloping so that he can reach around to play the higher strings. A wonderful video of a virtuoso soloist at work: