Playlists
Music That Makes You Feel in Love
by Interlude Writers February 12th, 2021 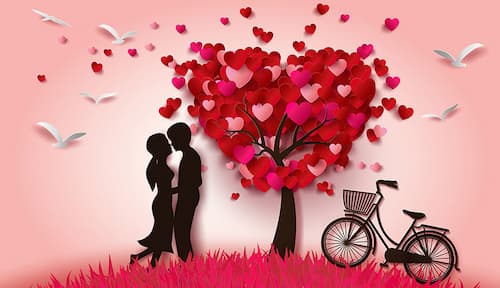 Ah, love – that ineffable feeling of excitement and happiness and belonging. What’s the music that gives you that same feeling or what was the music that brought together all those disparate feelings? We surveyed our writers and got an expected number of Romantic composers, but also some that lay outside that period.

Written in 1840, Widmung was from a set of Lieder called Myrthen composed by Schumann and later arranged for piano solo by Liszt. Dedicated to Clara Schumann as a wedding present, it is probably one of the most romantic and passionate pieces in the piano repertoire. Such an outpouring of eternal love, full of bliss and splendour as the music reaches the rapturous climax! A kaleidoscope of colours is drawn from the piano, creating the most resplendent portrayal of consummate love.


I really couldn’t think of a piece that makes me swoon; I did think of Wagner’s Liebestod, just because I can only imagine what feeling a love that intense might feel like (to be fair, I don’t think any love can realistically meet that combination of orgasmic suicide and harmonic resolution). In the end I selected the Schubert – which for me describes the following, which I wrote about the score one day: “Happiness is being on a crowded dance floor with somebody and feeling like you’re the only two in the room. Tragedy is knowing that because of circumstances, this is as close as you’ll ever get.” True story, too.

Puccini. Which one to choose… To my ears, Puccini brings magic, hope and love. In Puccini’s music there is the romanticism of both the French culture — Debussy — and the Italian culture — Verdi. Gianni Schicchi, Manon Lescaut, Tosca, La Bohème, Turandot, Madame Butterfly. For the purpose of the exercise, let’s pick the aria from “Un bel dì, vedremo” from Madame Butterfly. Puccini is one of the most performed composers of opera, and there is a good reason for this: his music is universal, just like love.


When I was asked, selecting music to express the notion of “being in love” was an easy task. But, to justify that choice with convincing rhetoric became a challenging endeavor. Simply put, being in love denotes a strong emotional attachment to another individual. I imagine a recipe for rendering such a feeling would be: Mix a generous helping of affection with equal parts of endearment and care, then finish off with an excessive dollop of tenderness. Aristotle seemed to have it duly compressed into the following quote: “Love is composed of a single soul inhabiting two bodies.” It is a yearning for togetherness, or a desire to be romantically connected, always and forever. With that concept in mind, I promptly alluded to Chopin‘s Cello Sonata in G minor, op. 63, and its third movement Largo, which represents the perfect synergy of musical dialogue comprising the cello and piano. It not only revitalized many lingering sweet memories, but also reminded me of this quote by Goethe: “Love does not dominate; it cultivates”. Essentially, love is an art.

My romantic relationships have never fallen into neat little boxes. Maybe because of that, I’ve always felt defensive of the love between Johannes Brahms and his lifelong friend and muse, pianist Clara Schumann. They loved each other dearly, and supported each other until they died, but they never married. It was probably for the best: he never felt obligated to sacrifice his artistic integrity to support a family, and she used her boundless energy to redefine what it meant to be a modern piano virtuoso.

But toward the beginning of their relationship, when the boundaries between them were the blurriest and Johannes’s love was burning the brightest, he composed his first piano concerto, in close partnership with Clara. He wrote that the second movement would be a portrait of her. It’s the most luminous, flattering portrait imaginable. No other piece of classical music captures the dreamy, hazy, joyous melancholy of what it feels like to be in a relationship that doesn’t follow the rules.

The ethereal, serene slow movement of Beethoven’s Fifth Piano Concerto has a special resonance for me as I heard it in concert in Vienna with my husband when we visited the city for our silver wedding anniversary. We went to the beautiful Konzerthaus for a Sunday morning concert, and afterwards we walked hand-in-hand in the spring sunshine.


Love has always been a highly personal and private affair for me. Maybe that’s one reason why I am drawn to the music of Johannes Brahms. While love, longing, and spiritual encounters clearly influenced his compositions, he did not write into his work the soul-felt emotions of his life. Well, of course he did, but he is not giving the listener specific instructions how to grasp the subtle shades of meanings in his music. Listening to Brahms takes a world of knowledge and an even larger portion of imagination. While his music can be enjoyed on a surface level, it always takes forensic attention to detail to reveal its full riches. That might as well be a recipe for love as well, don’t you think?

Love is only as insightful and clairvoyant as the persons involved. Uncertainty is inherent in all relationships, and the question of “where to take it from here?” closely resembles the process of artistic creation. Without self-discipline, boundaries between love, inspiration and realization become blurred, energy allocation becomes chaotic, and life notoriously complicated. Alternatively, a more durable – albeit less passionate – affection is fostered in the company of lovable people, caring, not competing, whose inner harmony lifts them through every difficulty. These tender musings I associate with Vaughan Williams‘ The Lark Ascending.

If I were to translate the feeling of being in love into music, it can only be the first movement of Beethoven’s Moonlight Sonata for me. I know it’s a bit cliché, but that doesn’t make the music any less powerful. Beethoven wrote it for his student, the Countess Giulietta Guicciardi. It seems that Giulietta also had feelings for Beethoven, but her parents were strictly against a union with a “man without rank, fortune or permanent engagement; a man of character and temperament so peculiar.” And they certainly objected to their daughter marrying a deaf person. Shame on the parents, but we are still lucky to have such a touching musical document of love.

The opening movement of the Piano Trio No. 1 in B major by Johannes Brahms for piano, violin and cello, makes me fall in love over and over. The cello soars with the lyrical, heart-stopping theme. This performance, with cellist János Starker, Josef Suk, violinist, and Julius Katchen, pianist, is perfection itself, the master performers well-matched. Written when Brahms was only 21, the composer returned to the piece later in life and revised the original version making the piece one of his earliest and latest works. Large-scale, and almost orchestral, with a prominent spotlight equally on each instrument, this glorious trio bursts with song.


When you’re in that stage of love where everything seems to be personal and affects you physically (do you remember that feeling in your stomach before that significant date?) the one piece of music that calls that to mind is the Prelude from Wagner’s Tristan und Isolde. From its first notes, tentatively reaching out and pulling back to the unresolved Tristan chord, the whole prelude feels like the wildly swinging emotions of first love. There’s triumph and sadness, discovery and reflection, and, of course, emotion, all tied together.


Elgar‘s Cello Concerto is generally more well-known than his Violin Concerto, but for me, this work for violin and orchestra is my knight in shining armour. The music is simply mesmerising and charming: the complex harmonies create so much yearning and desire, and the solo violin and the orchestra are practically like two lovers who have different personalities yet complement each other beautifully.

As a clarinet player I feel like I’m letting the side down when I don’t unquestionably pledge my allegiance to Rachmaninoff’s Second Symphony (you know, the one with that clarinet solo), but for me the third plumbs more depths than the second, and travels through such a wide range of the emotional spectrum. That bit at the end of the second movement where the violin solo emerges from the main theme gets me every time.


No music makes me feel in love. Only a person can elicit that elusive emotion in me. However, some music encapsulates that feeling, oddly synthesizing, and distilling the amorphous sensation of being in love. The strongest example is Richard Wagner’s ‘Liebestod’ from Tristan und Isolde, the composer’s seminal and infinitely complex opera that was first performed in 1865 after a nearly 13-year gestation period. The theme of the aria is romantic enough: Isolde contemplates her dead lover and imagines him alive once more before she herself finally succumbs as well. If the lyrics alone don’t stir you, the music will. Jessye Norman proves my point in one of the last performances of Herbert von Karajan.

The song that makes me think about love, is so gorgeously divine, and so jazzy that only one composer and writer team could have written it, and that’s the Gershwins. The song is, of course, “The Man I Love.”
And who has a more gorgeous and divine voice other than Ella Fitzgerald? The Man I Love was such a big hit that Hollywood made it into a movie. In 1947, Raoul Walsh cast Ida Lupino as a blue and heartbroken nightclub jazz singer. In the opening scene, we get to hear this liquescent tune.

George Gershwin: The Man I Love

Love makes us feel so many different things. Love music can bring forth all those emotions and, yet, at the end, leave us content.