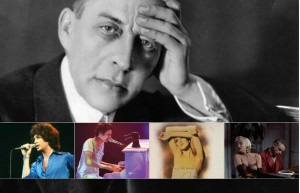 Sergei Rachmaninoff certainly knew a good tune when he heard it. But recognizing a good tune was simply not enough for him. He frequently took it apart and closely analyzed its contents before reassembling them in new forms and guises. And we all know his extended variation sets on themes by Paganini and Chopin. But Rachmaninoff did not know that his last work for piano solo, the Variations on a Theme of Corelli was actually not based on a Corelli melody. The theme does come from Corelli’s Violin Sonata Op. 5, No. 1, but the tune is an anonymous Portuguese dance probably written during the 16th century. After its premiere in 1931, critics suggested “this new composition will occupy a most important place in the literature, and will be played to death by pianists.” Goes to show that critics are wrong on occasion!

Sergei Rachmaninoff: Variations on a Theme of Corelli, Op. 42
Rachmaninoff not only recognized a good tune, he could write them himself! One of his most memorable tunes emerged in his Fourteen Songs, Op. 34. Published in 1915, the concluding “Vocalise” is written for soprano or tenor voice with piano accompaniment, but it contains no words. Originally composed for Antonina Nezhdanova, this melancholy “song without words” quickly became one of the composer’s best-known works. In fact, it became so popular that Rachmaninoff quickly made arrangements for orchestra, and for soprano and orchestra. Countless imitators have since followed Rachmaninoff ‘s lead and fashioned arrangements ranging from the sublime to the ridiculous.

Hot on the heels of Barry Manilow’s chart busting single “Could it be Magic,” which used a Chopin prelude for inspiration, another angelic-faced bard in serious need of a haircut decided to turn to classical music. His name was Eric Howard Carmen, and he originally hailed from Cleveland, Ohio. After a successful career as a member of the “Raspberries,” Carmen started his solo career with a couple of singles that were built around themes by Sergei Rachmaninoff. “Never Gonna Fall in Love Again” is based on the slow movement of Rachmaninoff’s Symphony No. 2. The song was reasonably successful in the charts and eventually sold more than 500,000 copies.

If “Never Gonna Fall in Love Again” could be called reasonably successful, his initial release “All by Myself,” became an instant classic. The verse is based on the second movement of Rachmaninoff’s Piano Concerto No. 2. It hit number two on the US charts and eventually sold over a million copies. Predictably, Carmen was rather happy, that is, until he got a nasty letter from the Rachmaninoff estate accusing him of plagiarism. The argument of “public domain” did not carry much weight, and both sides eventually agreed that the estate would receive 12 percent of the royalties. Celine Dion recorded one of the most notable versions of this song in 1996. Although highly popular, the cover received mixed reviews ranging from “…crammed with formulaic romantic bombast,” to “trying to out-emote Eric Carmen was almost crazy enough to work.”

Eric Carmen: “All By Myself” (Celine Dion)