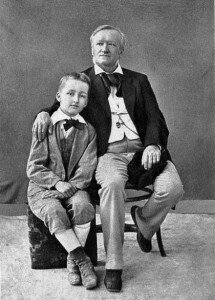 Richard Wagner (1813-1883) was the manliest man in a manly world of manly composers! Creator of theatrical and musical dramas lasting the better part of eternity, his works are perpetually in danger of drowning in gigantic puddles of testosterone. As such, it might come as a surprise to learn that Wagner was a habitual cross-dresser, with an “extremely detailed, if not fetishistic, interest in the minutiae of ladies’ apparel.” According to some scholars, “what emerges is a lively portrait of a cross-dressing composer who needed an aura of femininity to stimulate his senses.” The enigma that is Richard Wagner fittingly arises with the uncertain identity of his parents. The police administrator Carl Friedrich Wagner is commonly considered his “official” father, but the actor and painter Ludwig Geyer, who took over responsibility for the child, may well have been his real father. Wagner was never sure, but we now know that his mother Johanna was not the illegitimate daughter of Prince Constantin of Saxe-Weimar-Eisenach, as previously believed, but actually his mistress.

Richard Wagner consistently downplayed the significance of his musical education. Undoubtedly, he was keen to cultivate the notion of the untutored genius, but we do know that he struggled through piano lessons and a period of counterpoint instructions with Theodor Weinlig, cantor of St. Thomas in Leipzig. 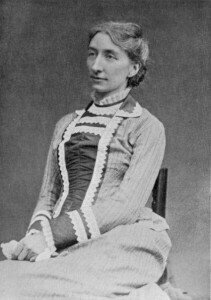 In the end, Wagner’s music immediately appealed to a wider public as its monumentality had the power to create an all-embracing sensuous and mystical state of ecstasy that principally stood at the center of all Romantic art. Richard Wagner was an extremely complex and highly unpleasant human being, yet his artistic creations represent the fullest musical and theatrical expressions of German romanticism. In his union with Cosima Bülow—the illegitimate daughter of Franz Liszt and Marie d’Agoult—Wagner found a devoted promoter of his music and philosophy, and the mother of his three children. Daughters Isolde and Eva were born when Cosima was still actively married to Hans von Bülow, and Wagner certainly had the highest musical aspirations for his only son Siegfried, nicknamed “Fidi” and born in June 1869.

Helferich Siegfried Richard Wagner (1869-1930) displayed a feminine demeanor while growing up and was greatly attached to his mother. Following in the footsteps of his father, however, he supposedly enjoyed dressing up as a ballerina during his student days. 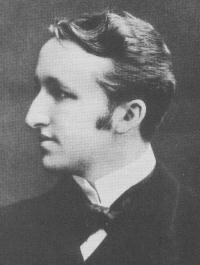 Siegfried received his first musical instructions from his grandfather Franz Liszt, and despite always wanting to be an architect, Cosima pressured him into composition lessons with Engelbert Humperdinck in Frankfurt. While studying in Frankfurt he fell in love with the English composer and pianist Clement Hugh Gilbert Harris, and during a 6 month journey to Asia, Siegfried not only discovered his true sexual identity but also his musical calling. Cosima was overjoyed that her son would follow in the musical footsteps of his famous father, but she was less enthusiastic about his sexual orientation.

Siegfried Wagner made his conducting debut as an assistant conductor at Bayreuth in 1894, and was promoted to associate conductor in 1896. He eventually took over as Artistic Director of the Bayreuth Festival in 1908. And he was certainly very active as a composer. Like his father, he wrote his own opera librettos and set 17 to music. His first opera, Der Bärenhäuter (The Bearskin Man), written in 1899 enjoyed a brief period of success, with Mahler conducting the score in Vienna. He also composed a number of instrumental works and songs, but his compositions are rarely performed nowadays. Siegfried had been continually pressured by his mother to marry and to continue the Wagner family line. Siegfried successfully resisted his mother’s increasingly urgent pleas, but when the journalist Maximilian Harden accused several public figures of homosexuality, the family quickly arranged for Siegfried’s marriage to the 17-year old Englishwoman Winifred Klindworth. The couple had four children in quick succession, after which, Siegfried resumed his premarital lifestyle. He remained in charge of the Bayreuth Festival until his death in 1930.