The preeminent British composer Ralph Vaughan Williams (1872-1958) set the model for composers of British songs in the 20th century: he composed several song cycles, setting lyrics by great authors and those little known. The earliest song settings by Vaughan Williams were of the greats of English poetry: Coleridge, Tennyson, and Shakespeare. Even in these early settings, however, we start to see some of his idiosyncratic text choices. Vaughan Williams’ Song Cycles set one text by Lord Thomas Vaux (1509-1556), another by William Barnes (1801-1886) from a collection of poems in the ‘Dorset Dialect,’ and then seven texts by the Scottish author Robert Louis Stevenson, better known for his adventure novels such as Treasure Island. 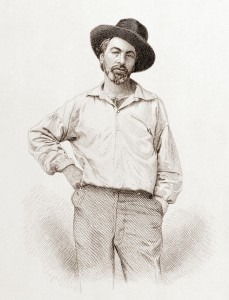 Walt Whitman, age 35, from the
frontispiece to Leaves of Grass.

Another unusual poet for this very British composer to set was the American poet of the mid-19th century, Walt Whitman (1819-1892). Vaughan Williams’ song cycle, Three Poems by Walt Whitman, written around 1925, includes two poems from Whitman’s famous collection Leaves of Grass. This work, which Whitman wrote and re-wrote over most of his life, started as a collection of 12 poems and was finished some 40 years later with over 400 poems.

The third poem in the collection, Joy, Shipmate, Joy! truly carries joy in both its text and its setting. The poet makes an analogy between death and the beginning of a new voyage –he leaves his ‘long, long anchorage,’ he travels swiftly away and happily. In his setting, Vaughan Williams captures the essence of the poem’s speed but also manages to make it a sea song at the same time.

JOY, shipmate, joy!
(Pleas’d to my soul at death I cry,)
Our life is closed, our life begins,
The long, long anchorage we leave,
The ship is clear at last, she leaps!
She swiftly courses from the shore,
Joy, shipmate, joy.

One minor poet he set was Fredegond Shove, who had been a bridesmaid at Vaughan Williams’ first wedding. Shove’s poem, The New Ghost, which combined an almost conversational tone with a sacred topic, that of a soul returning to Heaven, was an important poem marking the general societal return to religion after World War I. Vaughan Williams’ setting preserves Shove’s conversational tone, ending, almost abruptly, as though the things of Earth are no longer of importance.

‘And he, casting away his garment, rose and came to Jesus.’

And he cast it down, down, on the green grass,
Over the young crocuses, where the dew was–
He cast the garment of his flesh that was full of death,
And like a sword his spirit showed out of the cold sheath.

He went a pace or two, he went to meet his Lord,
And, as I said, his spirit looked like a clean sword,
And seeing him the naked trees began shivering,
And all the birds cried out aloud as it were late spring.

And the Lord came on, He came down, and saw
That a soul was waiting there for Him, one without flaw,
And they embraced in the churchyard where the robins play,
And the daffodils hang down their heads, as they burn away.

The Lord held his head fast, and you could see
That he kissed the unsheathed ghost that was gone free–
As a hot sun, on a March day, kisses the cold ground;
And the spirit answered, for he knew well that his peace was found.

The spirit trembled, and sprang up at the Lord’s word–
As on a wild, April day, springs a small bird–
So the ghost’s feet lifting him up, he kissed the Lord’s cheek,
And for the greatness of their love neither of them could speak.

But the Lord went then, to show him the way,
Over the young crocuses, under the green may
That was not quite in flower yet–to a far-distant land;
And the ghost followed, like a naked cloud holding the sun’s hand. 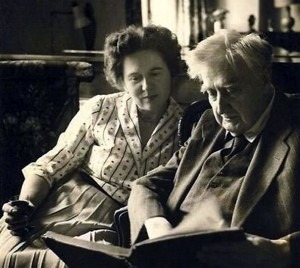 Late in his life, one of the poets he set was Ursula Vaughan Williams, his second wife. Vaughan Williams’ song cycle, published posthumously under the title Four Last Songs, was written 2 years before his death. Tired, the second song in the collection, captures the languor of its opening line: ‘Sleep, and I’ll be still as another sleeper holding you in my arms.’ It has been described as ‘among the most moving and effective that Vaughan Williams wrote, music and words magically united.’

Sleep, and I’ll be as still as another sleeper
holding you in my arms, glad that you lie
so near at last.
This sheltering midnight is our meeting place,
no passion or despair or hope divide
me from your side.
I shall remember firelight on your sleeping face,
I shall remember shadows growing deeper
as the fire fell to ashes and the minutes passed.


Shakespeare: It was a Lover and His Lass

Ralph Vaughan Williams’ songs always seem intensely personal, even in songs that had been set for centuries before him. His setting of Shakespeare’s It Was a Lover and Lass for two voices, follows the directions that Shakespeare specified in As You Like It, for the song to be sung by 2 voices, but he gives it a unique sound that captures the melancholy of the two banished courtiers.

It was a lover and his lass,
With a hey, and a ho, and a hey nonino,
That o’er the green cornfield did pass,
In springtime, the only pretty ring time,
When birds do sing, hey ding a ding, ding;
Sweet lovers love the spring.

Between the acres of the rye,
With a hey, and a ho, and a hey nonino,
Those pretty country folks would lie,
In springtime, the only pretty ring time,
When birds do sing, hey ding a ding, ding;
Sweet lovers love the spring.

This carol they began that hour,
With a hey, and a ho, and a hey nonino,
How that a life was but a flower
In springtime, the only pretty ring time,
When birds do sing, hey ding a ding, ding;
Sweet lovers love the spring.

And therefore take the present time,
With a hey, and a ho, and a hey nonino,
For love is crownèd with the prime
In springtime, the only pretty ring time,
When birds do sing, hey ding a ding, ding;
Sweet lovers love the spring.

In 1909, Vaughan Williams completed another song cycle On Wenlock Edge, based on the poetry collection A Shropshired Lad by A.E. Housman. In 2019, filmmaker Jeremy Hamway-Bidgood collaborates with Daniel Norman (Tenor), Sholto Kynoch (Piano) and Brodsky Quartet on a new visual interpretation of Vaughan Williams’ song cycle, the film was accompanied with live music. Watch the first part of the film and see how Vaughan Williams conjures up the wind and set the scene at the beginning of his song cycle.

On Wenlock Edge the wood’s in trouble;
His forest fleece the Wrekin heaves;
The gale, it plies the saplings double,
And thick on Severn snow the leaves.

‘Twould blow like this through holt and hanger
When Uricon the city stood:
‘Tis the old wind in the old anger,
But then it threshed another wood.

Then, ’twas before my time, the Roman
At yonder heaving hill would stare:
The blood that warms an English yeoman,
The thoughts that hurt him, they were there.

There, like the wind through woods in riot,
Through him the gale of life blew high;
The tree of man was never quiet:
Then ’twas the Roman, now ’tis I.

The gale, it plies the saplings double,
It blows so hard, ’twill soon be gone:
To-day the Roman and his trouble
Are ashes under Uricon.

On Wenlock Edge, a film with live soundtrack (Vaughan Williams, A. E. Housman)