In Tune Arts
Composers and their Poets: Schumann I
by Maureen Buja December 9th, 2016
Tags: Schumann

Robert Schumann as a Song Composer 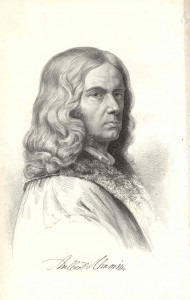 In the generation following Schubert, his new model for lieder writing influences many composers. Robert Schumann (1810-1856) took his models to heart and in doing so, produced some of the best music of the next generation of song composers.

Frauenliebe und –leben (A Woman’s Love and Life) is a set of poetry that describes, from a woman’s point of view, her life and her relationship with her man. Courtship, marriage, children, and finally death make up the entire cycle. For Schumann, it was a way of portraying his own tumultuous love life: after years of pursuit and legal battles, 1840 was the year he could finally marry his beloved Clara Wieck. We can see how Schumann advances beyond the creations of Schubert in that the role of the piano is even more independent than before. The mood of each song lies in the piano, rather than coming from the singer to the piano.

Two songs, one when she gets engaged (Du Ring an meinem Finger) and the final, where her husband dies (Nun hast du mire den ersten Schmerz getan (Now you have caused me pain for the first time), show very different settings conveying very different emotions. In the first, we hear the simple joy of our heroine and her fairly simple statements about her happiness. In the final song, drama comes to the fore: for the first time in their relationship, she is forsaken and left behind by his death. 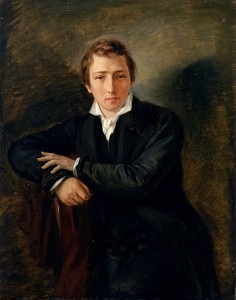 Another song cycle on love from 1840 was Dichterliebe (A Poet’s Love). The source for the sixteen songs in the cycle was Heinrich Heine’s collection called the Lyrisches Intermezzo, which was part of the larger Das Buch der Lieder, written in 1822-23. Heine occupies a curious position in German literature. While on one hand, he’s considered one of the central Romantic writers, at the same time he was also a critic of German romanticism. The Lyrisches Intermezzo is a collection of 65 poems of which Schumann set 20, 16 of which appeared in the Dichterliebe cycle.

We hear again how far Schumann has come from the model of Schubert: even in the first song, the piano is a tiptoeing accompanist, throwing splashes of color behind the voice.


The truly miniature third song dances along: the poet says all the things that he loved once in nature: the rose, the lily, the dove, the sun, but now he loves only her.


The collection closes with a curious piece: Die alten, bösen Lieder (The old, angry songs). The poet wants the old angry songs buried away in a coffin that is “larger than the cask in Heidelberg,” on a bier that is “longer than the bridge to Mainz,” carried by 12 giants, stronger that the “St. Christopher in the Cologne Cathedral…” and all because those songs and the coffin carry his love and his pain. Listen, in particular to the piano at the end of the piece.


What a truly phenomenal year 1840 was for Robert Schumann!