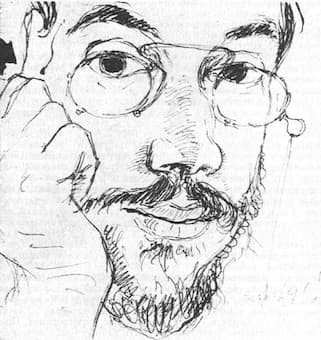 Sergei Diaghilev’s Ballets Russes hit Europe like a storm: no one had ever seen ballet taken to this level. Founded in 1909 by Diaghilev and lasting 20 years, the Ballet was based in Paris and traveled around Europe and to North and South America. Because of the Russian Revolution, the Ballets Russes never played in Russia. Its productions continue to be staged today.

Stravsinky and Nijinsky
in his Petrushka costume 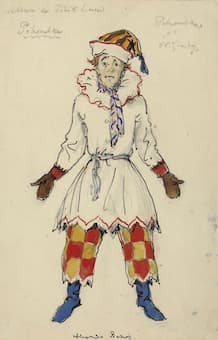 Alexandre Benois (1870-1960) was a Russian artist and so much more. He was an art critic, a historian, and a designer for the Ballets Russes. His whole family were in the arts: his father an architect, his brothers were a painter and an architect and his sister married the composer Nikolai Tcherepnin. In 1901, he was scenic director of the Mariinksy Theatre in St. Petersburg and moved to Paris in 1905. He started working with Diaghilev from the very beginning, having known him in Russia in the last years of the 19th century.

In 1911, Benois designed what was considered the highlight of his work with the Ballets Russes: the sets and costumes for Stravinsky’s Petrushka. 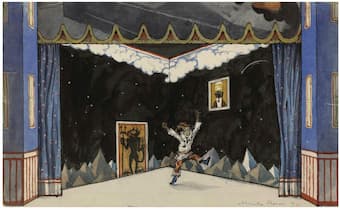 Petrushka, a puppet, falls in love with the Ballerina, who is also loved by the more powerful Moor. The puppet tradition in Russia picked up by Benois was based on his own memories of seeing the Petruska story told in puppet theatres in the street. In the street theatres, Petrushka has a red dress, a red hat, and, often, a red nose. In Benois’ designs, the red is retained for Petrushka’s cuffs, the edge of his ruff and hat, and in the design of his trousers.

Petrushka’s room depicts mountain, clouds, and a starry night – on the wall hangs a portrait of the Magician (his master who brought him to life) and a devil guards the door to prevent him leaving.


His rival, the Moor, has a much more lavish layout, calling to mind the designs by Léon Bakst for the Ballets Russes. Instead of the lonely images in Petrushka’s world, fruits and flowers and animals populate this world. 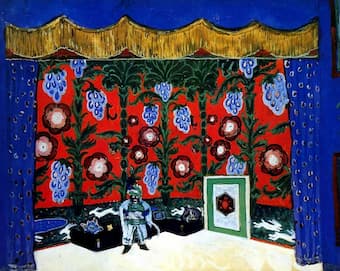 The tragic story comes to its end, with the Moor killing his rival, but Petrushka seems to reappear, thumbing his nose at his rival and perhaps returning as a ghost to haunt him. 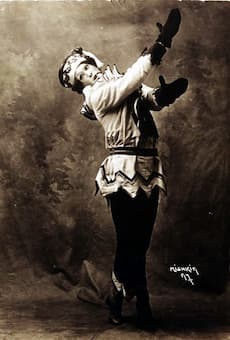 With Nijinsky in the role of the doomed Petrushka, the ballet was a success and became one of the most popular of the Ballets Russes productions. Even now, it is generally performed using both the original costume designs and sets, as well as Fokine’s choreography.

In writing for Sergei Diaghilev’s ballet troupe, Stravinsky was transformed from an innovative Russian composer to a cutting-edge international composer. His music for the Nijinsky-choreographed The Rite of Spring two years later was the shock performance of the year and he continued each year with works that continue to catch our ear today.