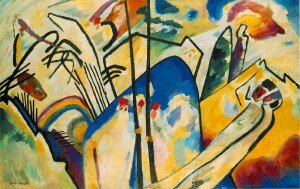 When you get two modern artists together, something special happens. In this case we have a composer/painter in Arnold Schoenberg and the Russian painter Wassily Kandinsky.

As the story goes, in early January 1911, Kandinsky, who was in Munich, went to an Arnold Schoenberg concert with his friends. What he heard there showed him the parallels between Schoenberg’s music, which was starting its trip towards serial music and atonality, and his own painting, which was trying to break from the traditional figurative style of painting. 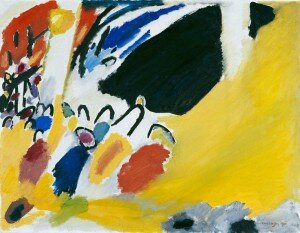 Beginning in 1909, Kandinsky’s larger pictures were divided into three fundamental categories: Impressions (or “direct sensations received from ‘outward nature’), Improvisations (sensations received from ‘inward nature’), and Compositions (‘the supreme category of painting, fusing rational conception, imagination, and intuition’). Over his lifetime, he created only 10 Compositions, but one was this year and entitled ‘Concert.’

The music that Kandinsky heard that night was Schoenberg’s second string quartet.

Schoenberg: String Quartet No. 2, Op. 10, I. Allegro (Fred Sherry String Quartet)
In this composition from 1911, the same year as the concert, we have horses on the left, people lying down on the right, and a castle in the background. The colour scheme gives us a battle, reinforced by the vertical lances in the middle, and yet a pale wash of cold colour tempering the violence. The sky colours break into the castle walls. 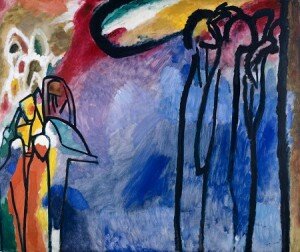 After the concert, the two artists met for drinks to discuss their affinities. Kandinsky made sketches of the performance and then distilled the sketched down until only traces remained of where he’d begun. His painting, Impression III (Concert), is considered “one of the earliest and most striking examples of modern art’s endeavor to fuse color and sound in a synaesthetic experience.” 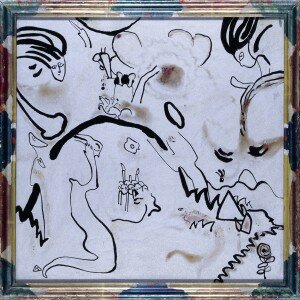 The year 1908, when Schoenberg wrote this quartet, was a very difficult year for the composer. He had just discovered that his wife, Mathilde Schoenberg, was having an affair with their friend and neighbour, the artist Richard Gerstl. The poems used by Schoenberg come from George’s 1907 collection Der Siebente Ring (The Seventh Ring).

‘Litanie’ (Litany), the poem used in the 3rd movement of the string quartet opens with ‘Tief ist die trauer die mich umdüstert,’ (Deep is the grief that comes over me) and continues, noting the speaker’s thirst, tiredness, hunger, and weakness. Yet, in his heart, a cry comes:

Kill the longing, close the wound!
Take my love away, give me your joy! 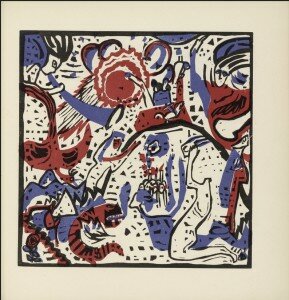 Schoenberg: String Quartet No. 2, Op. 10, III. Litanei (Jennifer Welch-Babidge, soprano; Fred Sherry String Quartet; Robert Craft, cond.)
The final movement, Entrückung (Rapture) starts with a sublime statement: ‘Ich fühle luft von anderem planeten.’ (I feel air from another planet.). The familiar fades, he loses himself in sound, and gives himself up to becoming ‘a whisper of the holy voice.’

Kandinsky’s Grosse Auferstehung (Grand Resurrection), also from 1911 is a painting on glass.

Kandinsky met Schoenberg as he was beginning his move towards serialism and atonality, and we can hear how the second string quartet is very much a work of the 20th century, rather than a holdover from the 19th century. Kandinsky himself was in motion, moving towards an increasingly non-referential style. A fortuitous meeting in 1911 benefitted both artists.