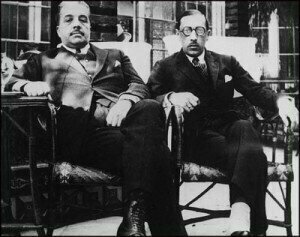 The appeal of Serge Diaghilev’s productions for the Ballets Russes is based on the novelty of Russian dance, and on its penchant for exotic subjects, many of them folkloric in nature. Igor Stravinsky scored a Parisian triumph for Diaghilev‘s troupe with his first ballet, L’Oiseau de Feu (The Firebird) during their 1910 season. And when the composer departed for his summer vacation in Switzerland, he decided to refresh his musical palette by composing a concert piece featuring the piano prominently. 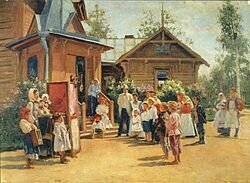 Petrushka performance in a Russian village, 1908

“In composing the music,” Stravinsky writes, “I had in mind a distinct picture of a puppet, suddenly endowed with life. Having finished this bizarre piece, I struggled for hours, while walking beside Lake Geneva, to find a title which would express in a word the character of my music and consequently the personality of this creature.” Eventually the image of “Petrushka,” a character found in puppet theaters all over Europe, occurred to Stravinsky. And when he played the piece under this title for the visiting Diaghilev, the impresario persuaded the composer to develop a complete ballet from the episode. 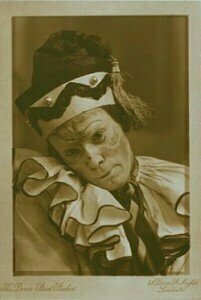 Diaghilev arranged for Alexandre Benois to provide a scenario for the ballet and to design the sets and costumes. Working with Stravinsky and Diaghilev, Benois cast the story at a carnival fair in Russia. Amidst the colorful setting of hawkers and vendors, animal acts and acrobats, merrymakers and townsfolk, the central plot unfolds the story of a magician who brings three dolls to life for his miniature theater. One is a sorrowful clown, Petrushka, the second his fearsome rival, and these two dance with a third, the petite Ballerina. The magician fails to realize, however, that his puppets have taken on a life of their own. When he is gone, they engage in a love triangle, and eventually their contention breaks out in public, and Petrushka is slain in front of the horrified fairgoers. The magician is left to gather up the shattered pieces of his creation while the ghost of Petrushka looks down from the tops of the carnival tents, laughing derisively at the frightened old man. Premiered at the Théâtre du Châtelet in Paris on 13 June 1911, Petrushka presents the perfect fusion of music, choreography, and décor to create a timeless tragedy of the human spirit with universal appeal.