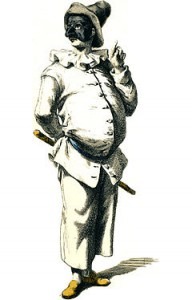 Sergei Diaghilev’s Ballets Russes brought music, art, and dance into the 20th century. Eschewing the traditional, Diaghilev worked with the leading artists in all fields to bring a new life to a fairly moribund art form.

On 15 May 1920, the new ballet Pulcinella opened at the Paris Opéra. The story and the choreography were by the dancer Léonide Massine, the music was by Stravinsky, and the costumes and sets were by Picasso.

It was this kind of collaboration that made the Ballets Russes still be remembered today. The character Pulcinella comes from the 16th century Italian commedia dell’arte stories. Pulcinella was a stock character who always dressed in white, wore a black mask, had a round belly, and was best known for his long-beaklike nose, which is where his name, meaning little chick, derives.

Léonide Massine as Pulcinella in the 1920 production of Pulcinella

The ballet unfolds in one act with Pulcinella; his girlfriend Pimpinella; his friends Furbo, Prudenza and Rosetta, and Florindo and Cloviello. The usual confusions about who loves who, fake deaths, and thwarted lovers ensues ending with marriages for all the couples.

The costumes and stage set by Picasso carried both the traditional commedia dell’arte images but placed within a cubist design.

In Picasso’s Three Musicians, at the Museum of Modern Art in New York, we have Pulcinella on clarinet, Harlequin and a monk, all familiar characters from the commedia dell’arte.

This cubist work draws on the same characters he’d already been working on for the Pulchinella ballet. 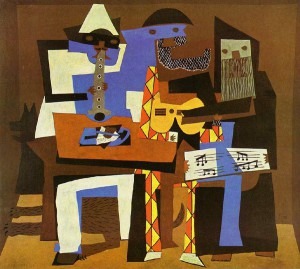 Stravinsky’s music for Pulcinella drew on albums of 18th-century music that Diaghilev had bought in Naples and London. Although believed at the time to be music by Giovanni Pergolesi (1710-1736), this attribution has proved incorrect. Pergolesi’s music was so admired at the time that composers often attached his name to their music for their own commercial gain. Stravinsky used the Pergolesian melodies but made them distinctly modern through his own rhythms and harmonies.

Stravinsky: Pucinella Suite: I. Overture (New York Philharmonic; Pierre Boulez, cond.)
From the beginning of the Overture, we know that although the melodic ideas might be from the 18th century, the sound is certainly modern. 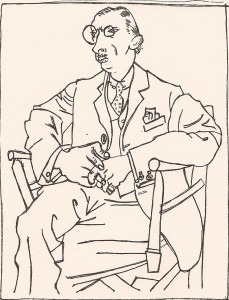 When we get to the Tarantella dance, we know that we’re not in the 18th century any longer. The beginning swirls of sound are pure Stravinsky, familiar from works such as The Firebird.

Stravinsky: Pucinella Suite: VIII. Finale (New York Philharmonic ; Pierre Boulez, cond.)
It all comes together in the Finale: the brisk bright rhythms, the repetition of small themes, the little motifs that get tossed between instruments – we’re far from the extended melodies of Pergolesi and very much in the 20th century.

It was Diaghilev who brought Picasso and Stravinsky together – the Russian and the Spaniard probably would have never worked together otherwise – and through their work together on Pulcinella, we are left with three iconic musicians.