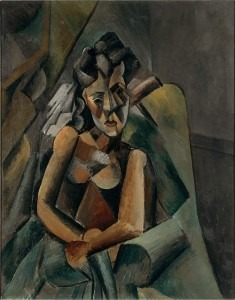 When you look at everything that the Spanish artist Pablo Picasso (1881-1973) was involved with, you have to cover most of the fine arts and then add a good slog of literature. He was a painter, sculptor, printmaker, ceramicist, and a poet and a playwright, as well as being a stage designer.

Picasso’s move into cubist with fellow artist Georges Braque beginning in 1909 was a fundamental influence on his stage designs. Cubism on the canvas moves the viewer into a strange multi-dimensional world, where foreground and background seem to move and the subject is viewed from different juxtaposed angles concurrently. 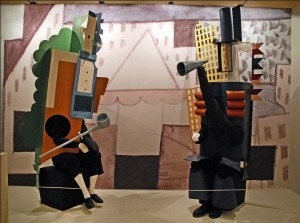 Picasso: Costumes for the roles of the Manager américain and the Manager français from the Exposition Ballets russes held at the Bibliothèque-musée de l’Opéra de Paris, 2009

In 1917, Satie’s work Parade was put on by Russian impresario Sergei Diaghilev. The ballet combined the talents of Paris’ top artists: Satie as composer, Jean Cocteau wrote the scenario, and Picasso did the costumes and stage design. The ballet was choreographed by the great Léonide Massine, who also danced. Although cubism may not be well-illustrated in the following pictures of Picasso and staff, you can certainly see cubism in the costume design:
Satie: Parade: VI. Acrobates (arr. for piano 4 hands. (Pascal Rogé, piano; Jean-Philippe Collard, piano)
Some of the costumes haven’t survived, such as the costume for the Female Acrobat. The character was added at the last minute by Massine and her costume of a spiral running up her legs was painted directly onto her body by Picasso. 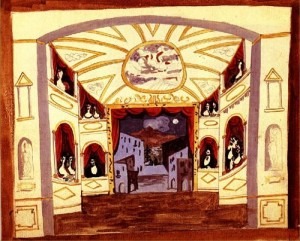 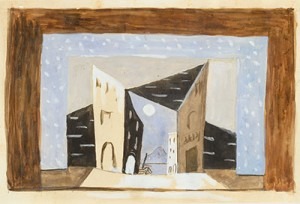 Stage design for Pulcinella in blue

Picasso worked on another ballet project for Diaghilev, but this time with Igor Stravinsky as his collaborator. Diaghilev had brought Stravinsky some scores that he’d found in Naples, attributed (at the time) to Pergolesi. The music, now thought to be by composers including Domenico Gallo, van Wassenaer, Carlo Monza, and others, would have been sold under Pergolesi’s name because of his then-current fame. Stravinsky took the music and made it his own, and the resultant style-change became known as Stravinsky’s ‘neo-classical’ style. 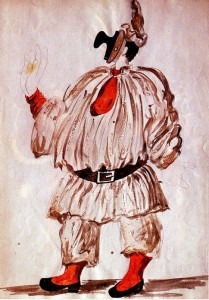 In the two scene designs, we can still see Picasso’s cubism come to the fore. At the same time, the use of panels also suggests the portable scenery used by the travelling commedia dell’arte companies. The dancers wore costumes in an 18th century style while Pulcinella, who was danced by the choreographer Massine himself, also wore the traditional mask.
Stravinsky: Pulcinella: Overture (London Sinfonietta; Esa-Pekka Salonen, cond.)
In these days new to design teams, each with a different responsibility for all the elements of a staging, it’s refreshing to see Picasso’s unified designs. It’s also very interesting to see Picasso’s cubism step off the wall and become a three-dimensional world.