The French pianist Marcelle Meyer (1897-1958) learned piano at age 5 from her older sister and entered the Paris Conservatoire at age 14. Two years later, she was awarded the Premier Prix after studying first with Marguerite Long and then Alfred Cortot. She took private lessons with Ricardo Viñes, who introduced her to the music of Ravel and from José Iturbi, who took her through the repertoire of Spanish music. She studied Debussy’s Préludes with the composer himself.


As common with many French pianists in the early 20th century, Meyer had a tremendous range of composers she played on the keyboard, starting with Bach, Rameau, Byrd, Dandrieu and Scarlatti to the moderns. 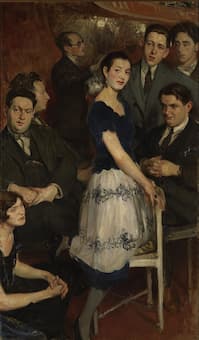 She was closely involved with “Les Six,” the French group who took their name from the Russian Mighty Five. In this 1922 painting, she’s shown at the centre, surrounded by five of Les Six, from left to right: Germaine Tailleferre, Darius Milhaud, Arthur Honegger, Jean Wiener and then Georges Auric, Francis Poulenc at the front right, and Jean Cocteau at the back right. Wiener and Cocteau were not part of Les Six; the missing member is Louis Durey.

Beginning in 1925, Meyer did two annual recitals in Wigmore Hall and would also appear with London Orchestras. For example, in June 1925, she performed both Bach’s Keyboard Concerto in D minor and Mozart’s Piano Concerto in D minor K. 466 with the Royal Philharmonic Orchestra under Eugene Goossens at Queen’s Hall. A Stravinsky concert the next received high praise from the critics. Richard Strauss invited her to Budapest in 1930 for a Richard Strauss Festival and she performed his Burleske for piano and orchestra which the composer conducted.

Many of her performances for Les Six were premieres, including the premiere of Milhaud’s Scaramouche for 2 pianos, which she did with Ida Jankelevitch. This 1938 performance with the composer was recorded in Paris. 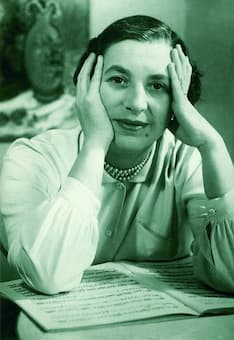 In the 1920s and 1930s, she added Romantic composers such as Schumann and Chopin to her repertoire and in the 1940s, she would do concerts with Rameau and Debussy in the first half and Couperin and Ravel in the second half.

Her recording career started in the 1920s and continued through the 1950s. In the decade between 1946 and 1956, she recorded extensively for the French label Les Discophiles Françaises, including the complete Préludes and Images by Debussy. Her recorded Ravel repertoire included Gaspard de la nuit, Sonatine, Valses nobles et sentimentales, Le Tombeau de Couperin, Miroirs and other short pieces. Of Chabrier, she recorded his Trois valses romantiques for two pianos (played with Francis Poulenc), the Dix pièces pittoresques and other works. She also made recordings of her performances of Stravinsky’s works, including the Serenade, Sonata, Ragtime, and the Three Movements from Petrushka. Recordings of Rameau, Couperin, and Scarlatti were also made.


Ravel’s Piano Concerto in G major was one of her specialties, and she performed it at the London Proms in 1933, two years after it was published. She never recorded it commercially because Marguerite Long’s Columbia recording, made in the presence of the composer, was the one to buy.

Although she had a career through the 1950s, it was the interwar years where she really held her fame. She had to leave Paris after WWII because she had played concerts for the Germans and after 1947, she settled in Rome.

Her playing was often praised by the critics, who found her performances of even the most difficult music breathtaking: ‘Miss Meyer has a technique of the sort which does not recognize the existence of difficulties’ was the response to a performance of Stravinsky’s Three Movements from Petrushka.

Her connections with composers and her outstanding technique meant that she could bring both the latest repertoire from Paris and music from France’s 17th- and 18th-century past to her audiences.