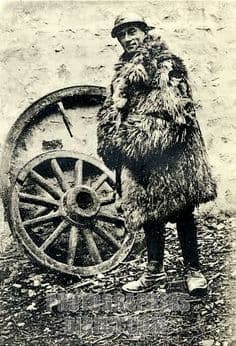 Popular in concert programmes and a staple of the pianist’s repertoire, Ravel’s Tombeau de Couperin is the last work he wrote for solo piano. It cleverly melds his sensibilities with a full appreciation of his Baroque antecedents, notably the brilliant clavenicistes Francois Couperin and Jean-Philippe Rameau. Its structure is based on a Baroque suite, and its composition reflected a trend in the first part of the twentieth century to refer back to and celebrate the grand siècle of French culture and the revival of older music; but its harmonies and emotional landscape are most definitely modernist.

“I’m beginning two series of piano pieces: first, a French Suite—no, it’s not what you think—the Marseillaise doesn’t come into it at all, but there’ll be a forlane and a jig; not a tango…” Maurice Ravel in a letter to composer and pianist Roland-Manuel, October 1914

Begun in April 1914, with the Forlane (eventually the third movement of the suite), Ravel continued to work on the score while France was ravaged by war. He had applied to be accepted for the military draft, and by the time he was called up, he had added a further five movements to the Tombeau. Ravel served as an ambulance driver on the French front at Verdun, the site of some of the longest and most savage battles of the First World War, and the experience had such a profound effect on him that a number of important musical projects never came to fruition; however, he did complete the Tombeau de Couperin and it was premiered by his friend, the pianist Marguerite Long in April 1919 at the Salle Gaveau in Paris.

Marguerite Long described Ravel as “depressed, thin and suffering from neurasthenia [PTSD]” when he was discharged from the army, and the effect of his experiences in the war is evident in the Tombeau. Each movement is dedicated to a friend who died in the conflict, such dedication made explicit at the beginning of each movement: Prélude is dedicated to Jacques Charlot, who had transcribed Ravel’s works for the piano; Fugue to Jean Cruppi; Forlane and Rigaudon are dedicated respectively to his friend lieutenant Gabriel Deluc from Saint-Jean-de-Luz and to Pierre and Pascal Gaudin, two brothers from the same town as Ravel who were killed on the same day. Menuet is a homage to Jean Dreyfus, son-in-law of Ravel’s marraine de guerre [wartime female pen-pal], at whose home Ravel finished writing the Tombeau de Couperin; and Toccata is dedicated to Joseph de Marliave, a musicologist killed at Senon on 24 August 1914 and the husband of Marguerite Long. 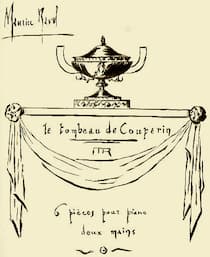 The title of the suite, Tombeau de Couperin, was already decided before the start of the war and Ravel intended it as a tribute to French eighteenth-century music rather Couperin specifically. The name Tombeau, literally meaning ‘tomb’ or ‘tombstone’, is taken from French literature of the sixteenth and early seventeenth centuries and referred to short poems or collections of poems by several authors honouring the memory of an individual or persons, ordinary or distinguished, real or imaginary. It was later taken up by composers – John Dowland and François and Louis Couperin all composed tombeau. Modern and contemporary examples include the Tombeau de Claude Debussy (1920), with contributions from Paul Dukas, Albert Roussel, Erik Satie, Igor Stravinsky, and Ravel himself; and the Tombeau de Messiaen (1994) by Jonathan Harvey.

When Ravel began his Tombeau, there was no funerary intent, but the dedications and the inclusion of Ravel’s sketch of a funerary urn and drapery for the inner cover of the first edition of the score confirm the suite as a memorial to his friends killed in the war.

Based on a Baroque dance suite, the Tombeau de Couperin is not a sombre work, per se. Rhythmically vibrant with colourful harmonies, the music appears to be the opposite of a tombeau, and Ravel expresses his own grief and sorrow less through actual musical characters and lamenting mood, but rather by placing the work in the specific musical category of the tombeau tradition. That said, the individual movements are all infused with a certain wistfulness and nostalgia, even those of the most upbeat character such as the perpetual motion Prélude and the fleet-fingered Toccata finale. But the slower movements, the Fugue, Forlane and Menuet, are tinged with melancholy, as befits a tombeau. With each movement lasting only a matter of minutes, the Tombeau de Couperin is also a work of great intimacy and introspection, rather than a virtuosic showpiece – though the pianistic techniques and artistry required are extremely virtuosic. It is Ravel’s most personal work, whose sense of elegy shines through the carefully-crafted movements with their crystalline runs, piquant harmonies and archaic cadences.