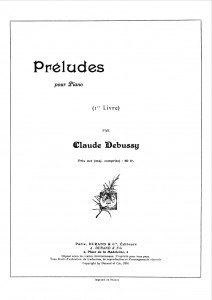 Debussy’s title page for his Préludes

Following the model of Bach and his 24 Preludes and Fugues from 1722, Debussy also wrote his own set of Préludes for the piano. Debussy began Book 1 in December 1909, finishing it 2 months later in February 1910; Book 2 was started in late 1912 and finished in April 1913.

Although the pieces have descriptive titles, these titles are placed at the ends of the pieces, not the beginning. The pianist is forced to approach each piece as an unknown, with only the tempo indication as a guide. It’s clear that Debussy regarded the titles as being of only secondary importance, although to us as listeners, we rely on the titles in a very different way.

It is not thought that the entire set of preludes was intended to be performed as a cycle, although that is a popular way to record them.

Debussy begins these piano pieces in ancient Greece, with his dancers of Delphi (Danseuses de Delphes), a stately procession, as though it is the Greek statutes themselves, with their flowing robes, that that are moving.

The title of the next work, Voiles, carries a double meaning of either sails or veils. In any case, it’s a floating work that, even after listening to it, does not enable us to determine which voile Debussy was intending.


The composer Edgard Varèse believed that the ‘Veils’ were those of the American dancer Loïe Fuller. 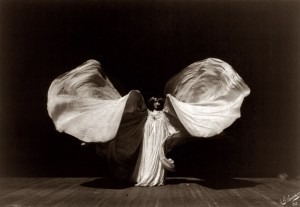 The next works depict the wind and then the scent of perfume on the wind. Debussy journeys to the isle of Capri for a bit of folksong, but folksong as invented by Debussy. From the heat of Capri, we then are given a minimalist prelude of Des pas sur la neige (Footprints in the Snow), and Ce qu’a vu le vent d’ouest (What the West Wind Saw), which had its inspiration in a story by Hans Christian Anderson, The Garden of Paradise.

The second half of the book has some wonderful ‘pictures in preludes,’ beginning with the most famous of the collection: La fille aux cheveux de lin (The Girl with the Flaxen Hair).


The girl comes from a poem of the same name written by Charles-Marie-René Leconte de Lisle. The maiden sits in the sun and the poet pleads with her to kiss her flaxen hair and her cherry-red lips.

The ninth prelude, La sérénade interrompue (The Interrupted Serenade), is in a Spanish mode, with the piano imitating a guitar, and the singer presumably poised beneath a window to serenade his lover, but there’s an interruption.

Another ‘picture prelude’ is Debussy’s La cathédrale engloutie (The Sunken Cathedral). It starts in a kind of medieval organum, with open chords and an unaccompanied melody.


Debussy is setting an old Breton myth where the city of Ys was built on the coast of Brittany and was swallowed up by the sea. It was supposed to be the most beautiful and impressive city of medieval Europe but fell into evil ways under King Gradlon’s daughter Dahut. She was seduced by the devil, opened the city gates at high tide and the city was lost. 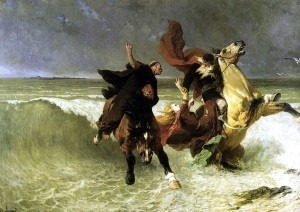 Flight of King Gradlon, by E. V. Luminais, 1884 (Musée des Beaux-Arts, Quimper), showing the king fleeing the sinking city but losing his daughter to the waves.

In Debussy’s setting, the cathedral of the city arises through the waves, with the bells sounding and then being silenced by the waves as the city falls back down again.

It has been suggested that the Puck of prelude 11’s La danse de Puck (Puck’s Dance) should be identified with Debussy himself as both ‘were subversive and hard to pin down.’

The last prelude in Book 1 takes us to the street band that Debussy saw on the streets of Eastbourne, England, in 1905.


In his Préludes, we see how Debussy’s piano music captures the playfulness of the performers, imitating their signature instruments such as the banjo, and giving us an affectionate picture of something that he had liked.