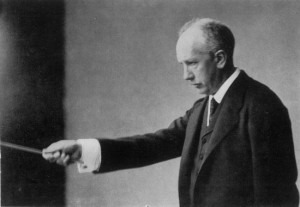 We always seek mentors and look for the pearls of wisdom that drop from their lips. The composer and conductor, Richard Strauss, created 10 Golden Rules in 1922 for conductors.

As you read this, think of images of Strauss as conductor. Standing tall at the podium, using only his right arm, often with his left arm hanging straight at his side.

One scholar looking at a video of Strauss conducting compares him looking “as passionate as a business executive” leading a board meeting.

Richard Strauss Conducting a performance of Till Eulenspiegel

But, when we look at a set of 10 Golden Rules that Strauss drew up in 1922, we can see what lays behind this apparent passivity. He places the music ahead of himself as its leader

1. Remember that you are making music not to amuse yourself but to please your audience.

2. Don’t perspire while conducting – only the audience should get warm.

3. Conduct Salome and Elektra as if they were by Mendelssohn: fairy music.

4. Never look encouragingly at the brass, except with a quick glance to give an important cue.

5. But never let the horns and woodwinds out of sight; if you can hear them at all, they’re still too loud.

6. If you think the brass is not blowing hard enough, tone them down another shade or two.

7. It isn’t enough that you yourself hear every word the soloist sings – you know it by heart anyway. The audience must be able to follow easily. If people don’t understand the words they will go to sleep.

8. Always accompany a singer in such a way that he can sing without effort.

9. When you think you have reached the limits of prestissimo, go twice as fast.* (*In 1948 he wrote: Today I should like to amend this: take the tempo half as fast.)

10. If you follow these rules carefully you will, with your fine gifts and great accomplishments, always be the darling of your listeners.

Think now of conductors who aren’t able to remove themselves from the spotlight – are you going to a concert to see the conductor or hear the orchestra? I’ve seen an increasing emphasis in symphony advertising that you’re going to hear “NAME OF CONDUCTOR’S Beethoven” – or even “FIRST NAME OF CONDUCTOR’S Wagner.” From the rules assembled by Strauss, this kind of personality-driven advertising of concerts might seem to be an anathema.

With this of Gustavo Dudamel conducting the Berlin Philharmonic where there’s a lot more action and interaction from the podium. I don’t find the same clarity in the work as in the Strauss-conducted performance.

The most important rule, I think, is the first, where he places the audience at the head – they are there to be entertained. And, then, his final rule brings it all back to the conductor – make the audience happy, serve the composer, make the singers’ job easy – and you will be recognized for your greatness.