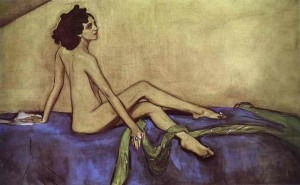 The Russian dancer, actress and art patron Ida Lvovna Rubinstein was born into one of Russia’s richest families. Receiving the best musical, dancing and theatrical education money can buy Ida eventually ended up in Paris and immediately made headlines for appearing nude in a single private performance of Oscar Wilde’s Salome. Sergei Diaghilev, famed impresario of the Ballets Russes was certainly impressed, and he engaged Ida for a number of company productions between 1909 and 1911. Using her inherited wealth Rubinstein formed her own dance company and commissioned several lavish productions. Le Martyre de Saint Sebastian with music by Claude Debussy premiered in 1911, and after the First World War she commissioned and performed in Maurice Ravel’s Boléro, and the Stravinsky ballets Le Baiser de la fée and The Firebird. Eventually she closed her company in 1935, and gave her last performance in Jeanne d’Arc au bûcher.

Rubinstein commissioned Jeanne d’Arc au bûcher as part of an intended “tetralogy of evil.” Parts 2, 3, and 4 with music by Darius Milhaud and Igor Stravinsky, respectively, fell victims to the outbreak of the Second World War. The story of the French peasant girl Joan of Arc, who fought English armies and was branded a heretic and burned at the stake at the age of 19, however, was first performed in concert in 1938, and fully staged in Zurich in 1942. It combined a verse drama by Paul Claudel—who was nominated for the Nobel Prize in Literature in six different years—with music by Swiss composer Arthur Honegger, prominent member of Les Six. The result, unsurprisingly, is a rather curious hybrid of oratorio, melodrama and film music featuring an adult choir, children’s choirs, singers and several speaking roles. The music is eclectic and inclusive, ranging from atonality to 1920s jazz, with military fanfares and Hollywood-like melodic sweeps punctuating the storyline throughout. And let’s not forget about Honegger’s imaginative instrumentation, which includes three saxophones and an Ondes Martenot to create a vibrant and unique sound world. 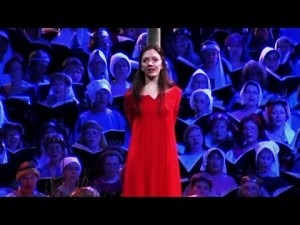 Claudel’s dramatic structure takes advantage of a known psychological phenomenon. The dying individual sees a sequence of images from their life flash by in the final seconds. As such, the drama takes place during Jeanne d’Arc’s final minutes at the stake. 11 scenes, which unfold without a break and are dramatically independent of each other, provide flashbacks to the heroine’s younger days and her trial. Constructed on two levels of the stage, the drama alternates scenes of spoken dialogue between Jeanne and Brother Dominique, and scenes of reconstruction of the past. This theatrical frame, alternating between heaven and earth, past and present, provided Honegger with the dramatic structure to mix and match musical styles. In addition, the inclusion of the spoken word allowed Honegger to exploit the interaction between speech and music in a flexible way. Drawing attention to the traditional conflict between the spoken and sung work, Honegger “invents a new way of conceiving musical drama in the struggle of the elements, instead of the musical transposition of the operatic tradition.” The artistic collaboration between Honegger and Claudel brings Jeanne d’Arc to life in a vivid and emotional drama that ingeniously transcends theatrical, dramatic and musical genres.