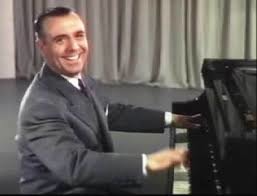 One of our few ‘Forgotten Pianists’ to have both a screen and stage career, Spanish conductor and pianist José Iturbi (1895-1980) had an international career from Spain to Paris, to Mexico and then Hollywood.

Starting piano as a child in Valencia, Spain, Iturbi eventually attended the Paris Conservatoire on scholarship from his native city. Along with studying piano at the Conservatoire, he also studied harpsichord privately with Wanda Landowska. He began his concert career in 1912, touring world-wide. In addition to his own concert career, he also performed with the violinist Manuel Quiroga between 1911 and 1937.

He was also a conductor, first in Mexico City in 1933 and then from 1936 to 1944 as director of the Rochester Philharmonic Orchestra. He maintained his harpsichord career, using the steel-framed harpsichord created by the French piano-maker Pleyel for Landowska. This harpsichord had a famously stiff action and Iturbi makes light work of something that required an education in and of itself to play.

At the cinema, he began first as an accompanist to silent movies; on the screen, he performed a wide range of music from classical to popular. In Anchors Aweigh (1945), he leads an 18-piano ensemble performing Liszt’s Hungarian Rhapsody No. 2. Note Gene Kelly and Frank Sinatra running around the Hollywood Bowl in the background.

For a touch of his more popular music style, here is Iturbi, his sister Amparo (1898-1969), and whole lot of mirrors doing it to some boogie woogie in Holiday in Mexico (1946). In that movie, José Iturbi had a major role: The U.S. Ambassador’s daughter (Jane Powell) falls for a Mexican pianist (José Iturbi) old enough to be her grandfather.

His fame was such that in movie posters, he received prominent billing: Music for Millions (1944), Anchors Aweigh (1945), Three Daring Daughters (1948), and That Midnight Kiss (1949) are indicative of the drawing power of his name.

Even in the trailer for Anchors Aweigh, more time seems to be spent with José Iturbi than with the other stars!

Through the fifties, sixties, and seventies, Iturbi enjoyed a hugely popular touring career, both as a pianist and a conductor.