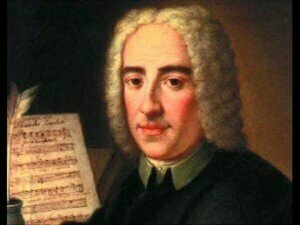 The Scarlatti family name—in various spellings—was common in Sicily, with several branches of additional Scarlatti families residing in Rome and northern Italy. Alessandro Scarlatti (1660-1725) was the musical bedrock of the family, and he became the most important opera composer of his generation in Italy. Besides roughly 100 operas, he also composed 600 cantatas, many oratorios, serenatas, sonatas, and other instrumental pieces. He helped to establish Naples as a leading operatic center, wrote music of incredible emotional quality and death, and enjoyed great respect from his patrons. We know little about his early musical training, but at the age of 12 he was sent to Rome to live with relatives and to study with Giacomo Carissimi. In time, he became maestro di capella for Queen Christina of Sweden, and subsequently went on to grab operatic glory in Naples. Alessandro was not merely a prolific composer; he also assured that his musical DNA was passed on to the next generation. In April 1678, Scarlatti married Antonia Anzalone who would bear him ten children, including the supremely talented son Domenico.

Domenico Scarlatti (1685-1757) was born in Naples, the sixth child of Alessandro Scarlatti. Father Alessandro took over the musical training of his son, and he arranged for his son’s appointment as organist at the viceregal chapel at Naples before the boy had turned 16. 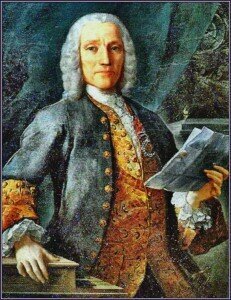 Following in the footsteps of his father, Domenico composed three operas for the 1703/04 operatic season in Naples. However, he was first sent to Venice where he met Handel, and subsequently appeared in Rome in 1708 to became maestro di capella to the exiled queen of Poland, Maria Casimira. He composed operas, chamber cantatas, and other vocal music and in 1719 he received an appointment to the royal chapel of João V of Portugal. Before arriving in Lisbon, Domenico had already composed a number of keyboard pieces, and he kept adding to his catalogue by producing sonatas for his students. When his first publication, 30 sonatas called “Essercizi” was issued in 1738, it sold like hotcakes throughout Europe. During the last six years of his life, he organized his keyboard sonatas into various manuscripts, and he is still primarily remembered for his 555 works in that genre.

While Domenico Scarlatti led the way in his keyboard contributions, his older brother Pietro Filippo Scarlatti (1679-1750) found a stylistic bridge that connected the late Baroque to the early Viennese School of the 18th century. 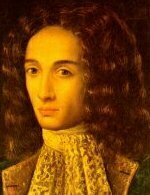 Born in Rome, Pietro Filippo was the eldest of Alessandro Scarlatti’s children, and he began his musical career as the choirmaster at the cathedral of Urbino. In 1708 his father brought him to Naples, and Pietro Filippo initially worked as the court organist. However, he also started working on operas. His background as organist and choirmaster served him well on the operatic stage, and in the footsteps of his father created multicolored sonorities and harmonies supporting attractive and simple melodic lines. His only opera Clitarco was premiered in 1728, but the score has regrettably been lost. His oeuvre also includes a number of cantatas and a multitude of keyboard toccatas.

Alessandro Scarlatti was the second of eight children. His sisters Anna Maria and Melchiorra Brigida were singers active in Rome and Naples. His brother Francesco was a violinist in Naples and Palermo, and another brother Tommaso Scarlatti was a tenor trained at the Neapolitan conservatory.

Within this extended musical clan, nobody really knows the precise date of birth or relationship to Giuseppe Scarlatti. A Giuseppe was born to Tommaso, and another Giuseppe was possibly a nephew to Domenico. Be that as it may, one of his earliest works was performed in Rome, and he was active in a number of different cities, including Florence, Milan, Pisa, Lucca and Turin. Giuseppe Scarlatti also seems to have been active in Vienna, where he enjoyed the protection of Gluck. He composed over 30 operas and continued the lyrical melodic tradition established by Alessandro and Domenico Scarlatti.