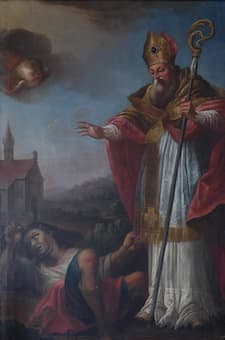 When all thoughts turn to love, and lovers express their affection with greetings and gifts, it must be Valentine’s Day. That very special day for lovers falls annually on February 14, because it is named after a Christian martyr by that name. I guess, there are actually a number of Christian martyrs named Valentine, and they all have their own sad stories. But the one I like involves the Saint sitting in prison and restoring the sight of the blind daughter of his jailer. Just before his execution, he supposedly wrote her a letter signed “Your Valentine.” Valentine traditions have evolved over time, but my favorite is the Italian tradition of giving the beloved a “key to unlock the giver’s heart.” Other favorites include chocolate, a bottle of champagne or a nice cuddle. 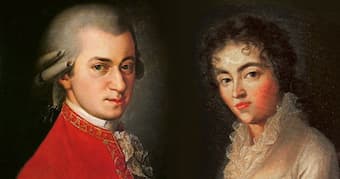 But the thing I would not ever want to miss on Valentine’s Day is music. Some famous writer once said, “Music is the shorthand to emotions.” I would even go further and say that music is pure emotion, and on Valentine’s Day music speaks in the language of love. Here then is my list of the best classical songs for Valentine’s, and for me it starts with one of the most emotional andantes Mozart ever wrote. It’s the slow movement of his 21st Piano Concerto, and it has the nickname “Elvira Madigan” because the music featured in a famous film by that name. I do have some “special” connection to this song, and for me personally, it will be the best classical song for Valentine’s ever. 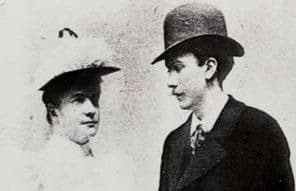 Painters paint pictures of their lovers, and I just love it when composers paint their beloved in music. Richard Strauss fell in love with the highly-strung soprano Pauline de Ahna, and their marriage lasted almost 55 years. When Strauss traveled without his wife, he wrote her long love letters nearly every day. Pauline in turn was intensely jealous of her husband, and on her 80th birthday she told a friend, “I would still scratch the eyes out of any hussy who was after my Richard.” When the celebrated singer Lotte Lehmann visited the couple, she reported, “I often caught a glance or a smile passing between her and her husband, touching in its love and happiness, and I began to sense something of a profound affection between these two human beings, a tie elemental in strength…” Their relationship was based on a mutual passion for music, and when Strauss composed the autobiographical tone poem “A Hero’s Life,” he composed a section entitled “The Hero’s Companion.” The composer wrote, “It is my wife I wanted to portray. She is very complex, very much a woman, a little depraved, something of a flirt, never twice alike, every minute different to what she was the minute before.” At any rate, you can clearly hear the composer’s love for his wife, and it is one of my favourite songs for Valentine’s. 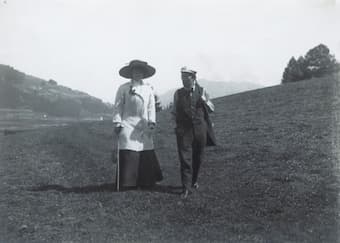 Alma Maria Schindler was one of the most colorful and controversial personalities in the Viennese artistic circles of the early 20th century. A thoroughly modern woman way before social media, she was obsessed by a sense of entitlement that the world owed her something in return for her brilliance and beauty. Alma was drawn to older men with artistic credentials, intellect, creativity or money, and she attracted them like flies. She took painting lessons from Gustav Klimt, who also first kissed her at seventeen, and she played the piano and composed music. A close friend wrote, “She is beautiful—that is intolerable. She plays excellently—that is annoying. And also composes—it’s enough to drive you crazy!” Gustav Mahler first met Alma Schindler in 1901. A whirlwind courtship soon ensued, and Gustav proposed marriage on 21 December 1901. The “Adagietto” from his 5th symphony is “a love song without words written for Alma.” It is full of sighing motives and winding suspensions, underscoring a sense of intimacy and longing. It is without doubt, one of the best classical songs for Valentine’s Day. 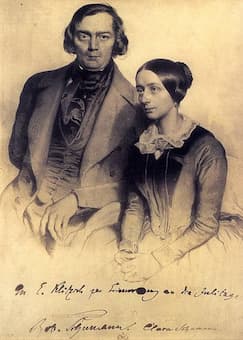 When it comes to music filled with love and yearning—perfect music for Valentine’s Day— Robert Schumann is the composer to consult. Schumann grew up in a world of literature and poetry, and he kept falling in love at the drop of a pin. After a good many relationships, he fell in love with the daughter of his landlord, the much younger Clara Wieck. Mr. Wieck was a respected piano teacher, and he witnessed a great many of Schumann’s affairs. We can’t really blame him for not wanting his young daughter, a highly promising pianist, to have anything to do with the philandering composer. But the couple did fall in love, and even a lawsuit brought by her father was unable to stop this union of hearts and minds. Schumann certainly had a gift for pouring his feelings into his music, and his Romance in F-sharp is one of my all-time favourite songs for Valentine’s. 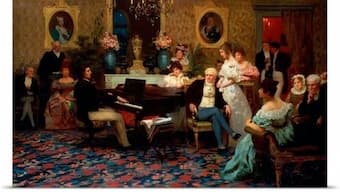 Chopin playing in the Salon

A famous critic wrote, “After playing Chopin, I feel as if I had been weeping over sins that I had never committed, and mourning over tragedies that were not my own. Chopin’s music creates a past of which one has been ignorant, and fills one with a sense of sorrows that had been hidden from one’s tears.” I’ve had to read this description a number of times, but it’s clear that Chopin was able to perfectly and beautifully encode emotions and feelings. He certainly was one of the greatest pianists the world has ever known, and musicians often call him “the poet of the piano.” It has been suggested that Chopin’s Parisian career, or possibly his entire musical career, was launched in the salon of the divine Countess Therese D’Apponyi. She hosted lavish parties, and naturally she became one of Chopin’s piano students. Lots of attractive and wealthy women just couldn’t wait to be swept off their feet by this handsome and charming musical genius. If you are looking to communicate sensuality and deeply felt emotions this Valentine’s, look no further than Chopin’s nocturnes. 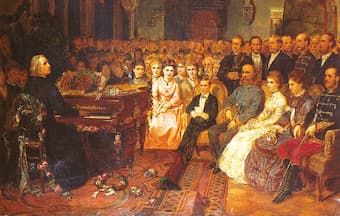 Franz Liszt playing a concert for the emperor Franz Josef

While Chopin’s music is full of innuendo ready to stimulate the romantic imagination, his colleague and one-time friend Franz Liszt wasn’t at all shy to express what he wanted. Liszt was famous for his romantic conquests and he had incredible magnetism on and off the piano bench. A young American student wrote, “In Liszt I can at last say that my ideal in something has been realized. He goes far beyond all that I expected. Anything so perfectly beautiful as he looks when he sits at the piano I never saw, and yet he is almost an old man now. His personal magnetism is immense, and I can scarcely bear it when he plays. He can make me cry all he chooses, and that is saying a good deal, because I’ve heard so much music, and never have been affected by it.” Or as another romantic conquest put it, “Franz is kind, gentle and extremely generous…but the only person he ever loved was the reflection of himself he had created.” And that reflection of longing is clearly heard in his compositions, with the series of “Dreams of Love” some of the best songs for Valentine’s. 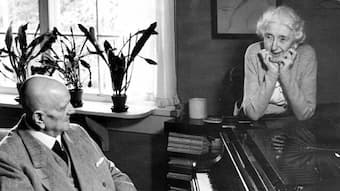 Jean Sibelius was extremely good-looking, slender, sensitive and very attractive. “He was lovable,” wrote a female admirer. “Refined, attractive, polite, he had that something that women must love, and of course, we were all in love with him…” Acutely aware of his magnetism and appeal to the fairer sex, Sibelius fell head over heels in love with one beauty after another. He eventually settled down and secretly married Aino Järnefelt, and the couple had six daughters. Life, however, was not easy as the composer was subject to great mood swings, was perennially in debt and frequently drank himself into a coma. When she found him once too often passed out at the dining-room table in the morning, Aino had enough. She returned to her parental home for extended periods of time, but she did not leave him. “In my mind,” she writes, “the love just grows and rolls on even larger. Wonderful treasures for me are your compositions, from which I always find what I am seeking.” Just listen to the Sibelius Romance for violin and piano, and you can easily hear what Aino was talking about. 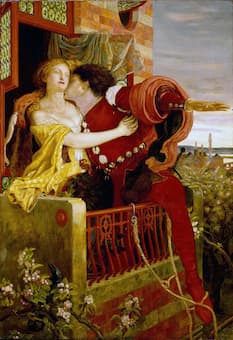 Romeo and Juliet are surely the most famous lovers in history. The basic story dates back to antiquity, and Shakespeare borrowed heavily for his tragedy. That play is set in Verona Italy, and Juliet drinks a potion to put her into a deathlike coma to escape an arranged marriage. Romeo, her lover, never gets the message that it is simply a ruse, and he finds his love lifeless in the family crypt. Overcome with grief Romeo drinks the poison, and when Juliet awakes and discovers that Romeo is dead, she stabs herself with his dagger. The tragic death of the two young lovers ultimately reconciles their feuding families. This tragic and most famous love story ever written also found its way into music numerous times. Pyotr Ilyich Tchaikovsky composed three different versions of his Romeo and Juliet Overture, and the beautifully seductive yet simultaneously tragic music mirrors the trials and tribulations of his personal life. It is undoubtedly one of the best classical songs for Valentine’s. 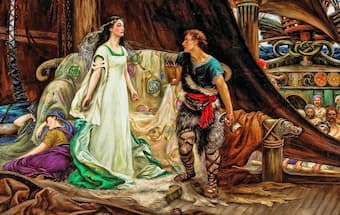 Tristan is a Breton nobleman who is supposed to bring the Irish princess Isolde to be married to his uncle Marke, King of Cornwall. During the journey, they fall passionately in love, but quickly understand that their relationship is doomed. They intend to drink poison, but Isolde’s maid substitutes a love potion. There is no escape; they are now in ecstatic love forever. Isolde does end up marrying Marke, but secretly the lovers continue their passion until they are discovered. In the ensuing fights, Tristan is mortally wounded and dies in Isolde’s arms. The princess collapses and both are reunited in their “love death.” This tragic story is rather ancient, but it achieved great fame in the hands of Richard Wagner. He described the first three measures of the famous “Prelude” as “no end to the yearning, longing, rapture, and misery of love: world, power, fame, honor, chivalry, loyalty, and friendship scattered like an insubstantial dream… one sole redemption; death, the sleep that knows no waking!” If you want to inspire some sexual longing and yearning at Valentine’s, maybe you want to give Wagner a try. 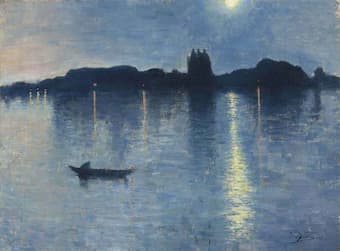 If Wagner seems a bit heavy-handed and over the top, maybe you prefer the magical moonlit world in Clair de lune? The poet Paul Verlaine provided the words and Debussy composed the music. Debussy actually composed several settings by following Verlaine’s suggestion that “Music is not the beauty of song, but song the beauty of music.” The teenager Debussy was in love with a red-haired beauty with green eyes, blessed with a beautiful soprano voice, and his “music resembled an amorous diary of dreams and desires of infinite sweetness.” To me, this is the perfect song to share with your beloved at Valentine’s, and surely one of the best classical songs ever. Do you have a favourite? Valentine’s Day in 2021 will be a rather unusual affair still, but we can always take solace in music and thereby be close and connected to the ones we love.