“Inspiration does not willingly visit the lazy” 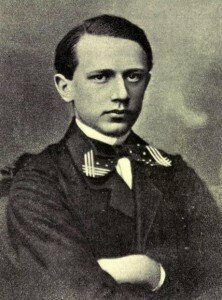 Ten days after the successful premiere of his Sixth Symphony in 1893, a raging cholera epidemic claimed the life of Pyotr Ilyich Tchaikovsky (1840-1893), one of Russia’s most famous composers. His music appealed to audiences outside of Russia with an immediacy and directness that was startling. Timeless melodies, presented with eloquence and poise and matched by his inventive use of harmony and orchestration, have ensured universal audience appeal. A hugely precocious musical talent, Tchaikovsky was born the second son of a mining engineer in 1840. Introduced to music and poetry early on, he was able to read in French and German by age six. The first documented attempt at composition dates from September 1844, and he started formal piano lessons one year later. Nevertheless, his family insisted that he should be educated for a career as a civil servant, and he began working as a clerk in the Ministry of Justice in 1859.

Tchaikovsky: Groza (The Storm), Op. 76
Concurrently, he attended concerts and operas at every opportunity, and after an initial year of musical study at the Russian Music Society, he enrolled at the newly founded St. Petersburg Conservatory in 1862, studying composition with Anton Rubinstein. As a member of the first graduating class of 1866, he was the first important academically trained Russian composer. His formal Western-oriented education brought him into immediate conflict with the contemporary nationalist movement embodied by the Russian composers of “The Five.” However, the real issue was one of professionalism, not nationalism. Tchaikovsky once wrote, “I sit down to work each morning at 9 am, and the muse has learnt to be on time.” Be that as it may, Tchaikovsky left the conservatory a fully formed composer and a friend prophesized “you are the greatest musical talent in present-day Russia… I see in you the greatest, or, better said, the sole hope of our musical future.”

Tchaikovsky: String Quartet in B-Flat major
Anton’s brother Nikolay Rubinstein visited St. Petersburg in September 1865 to recruit a theory teacher for the conservatory’s newly established sister school in Moscow. Tchaikovsky was hired immediately, and over the next decade the composer secured his professional reputation, and he embraced every important musical genre. He became part of the literary and theatrical Muscovite elite, and while he openly associated with the homosexuals in his circle, he also expressed the belief that he “could function in a heterosexual union even if he had to lead a double life.” During the composition of his First Symphony he suffered a nervous breakdown, and he set himself the task of reconciling Western musical foundations with the native musical practices he had been exposed to since childhood. For a time, he even became a music critic for two Moscow newspapers, producing 61 essays that offer a detailed look at the concert and operatic life of the city.

Tchaikovsky: Symphony No. 1, Op. 13, “Winter Daydreams”
In 1876, Tchaikovsky traveled to Paris with his brother, Modest, and then visited Bayreuth, where he met Liszt, but was snubbed by Wagner. Yet by 1877, Tchaikovsky was an established composer who enjoyed great popular success. However, it was also a period of deep personal problems and depression. He foolishly married Antonina Ivanovna Miliukova, an obsessed admirer, with their disastrous union lasting a mere nine months. However, he also managed to secure the long-term financial support from Nadezhda von Meck, widow of a railway baron. It allowed Tchaikovsky to resign his position at the Moscow Conservatory, and to become a professional full-time composer.

While his music remained popular among audiences, critical opinions were rather mixed. Russian colleagues felt that he did not sufficiently represent their native musical values, and Western critics dismissed his music as “lacking in elevated thought.” A critic wrote, “The furious peroration sounds like nothing so much as a horde of demons struggling in a torrent of brandy, the music growing drunker and drunker.” For much of his life, Tchaikovsky regarded himself as a social outcast, and his final years were continually plagued by anxiety and depression. Nevertheless, his death on 6 November 1893 at the height of his artistic success and powers came as a profound shock. And while the manner and cause of his death have become an ideological hot potato, Tchaikovsky’s reputation among concert and opera audiences is safe and secure.