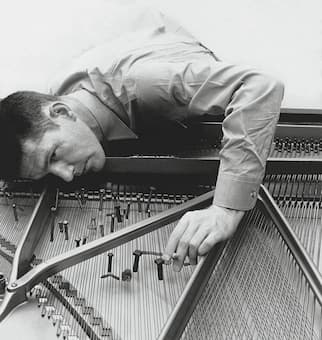 ‘Extended techniques’ are those which involve using unconventional or unorthodox methods to create sounds and unusual sonic effects. Perhaps the most famous of these is the “prepared piano”, whereby everyday objects such as nuts and bolts, nails and small pieces of rubber and plastic are placed on and between the strings. This creates unusual percussive or metallic effects when the hammers strike the strings. The prepared piano was used extensively by the American composer John Cage, who saw it as an opportunity to “place in the hands of a single pianist the equivalent of an entire percussion orchestra … With just one musician, you can really do an unlimited number of things on the inside of the piano if you have at your disposal an exploded keyboard”. (from For The Birds: John Cage in Conversation with Daniel Charles)

Extended piano techniques are generally associated with avant-garde and experimental music of the 20th and 21st centuries, but one could argue that both Haydn and Beethoven used “extended techniques” in some of their piano music, whereby they utilised new developments in piano design to create specific sonic effects. For example, in Haydn’s piano sonata in C, Hob XV1:50, an “open pedal” is used to create eerie effects in the development section of the first movement. Likewise, Beethoven’s direction to play the first movement of the ‘Moonlight’ Sonata “Senza sordini”, to play “without mutes,” or with the dampers raised off of the strings – or, in other words, with the right hand pedal down throughout – is intended to create a halo of sound, adding to the mysterious mood of this movement. 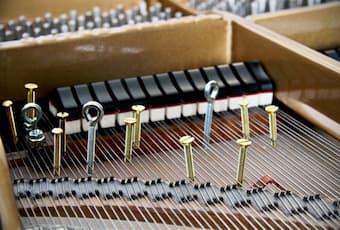 There are many other extended techniques, some quite weird and wonderful, which performers and composer can employ to alter and extend the sound of the piano. These include: strumming the strings; hitting or tapping the outer rim of the piano to create percussive effects; ‘muting’ by placing one hand on the string(s) to mute them while playing the keys with the other hand; silently holding down a key or group of keys to utilise the instrument’s harmonics; use of electronics to create distortion, feedback or playback loops.

This piece by Turkish pianist and composer Fazıl Say was inspired by Kara Toprak, a popular song in Turkey. A muted technique – as seen in the video of Say performing the piece – is used in the introduction and Epilogue to imitate the sound of the Saz, a Turkish lute.

Crumb is well known for his use of extended techniques in his music to achieve different and new timbres and effects, and his piano music is an adventure into a soundworld of infinite variety. Makrokosmos is a series of four volumes for the piano, inspired by Bartók’s Mikrokosmos, which represents a detailed exploration of the sonic possibilities of the piano. The pianist is required to play on the keys and inside the piano, and is also expected to whistle, sing, shout and whisper.

Cage started composing for prepared piano in the late 1930s and many of his early works were intended as accompaniments for dances for Cage’s collaborators, notably Merce Cunningham. Sonatas and Interludes was composed in the mid-1940s and is more complex than his earlier works for prepared piano. The preparation techniques result in percussive, metallic and bell-like sounds, muted notes and knocking, and even some recognisable piano sounds!

In this piece, the pianist does not touch the piano keys at all. Instead, the sound is created by manipulating the piano strings, sometimes scraping a fingernail on the strings to produce a haunting, keening cry. Two players are required to play the piece, one standing at the piano’s crook and the other holding down the damper pedal throughout.

Piano music by American composer Stephen Montague involves many extended techniques, including prepared piano, arm clusters, tape, playing on the frame and strings, and even audience humming. In his piece ‘Something in Grandma’s Attic’ percussive sounds from the piano’s frame suggest spooky creaking and scurrying from upstairs… 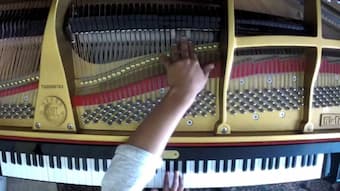 Playing inside the piano

Helmut Lachenmann – ‘Guero’, in which a grand piano is made to sound like a small, wooden instrument from South America known in English as a “scraper”, using techniques such as running the fingers along the fronts of the white keys and along the tuning pegs.