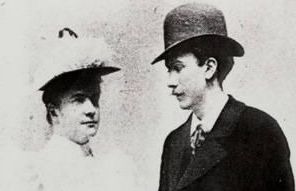 After sampling the sexual exploitations by some members of the Viennese Strauss family, it might be time to restore our faith in humanity—especially with Valentine’s Day around the corner—by taking a look at a different Strauss, namely Richard from Munich. As a celebrated international conductor, Richard Strauss enjoyed an impressive female following, particularly in the gallery of heroines that he brought to the stage as a composer. Yet by the time of his 37th birthday he was still a bachelor with no scandalous love affairs to his name. And so it came as a complete surprise when Richard proposed to his former student and operatic soprano Pauline Maria de Ahna in the middle of a turbulent rehearsal for his opera “Guntram” in 1894. Apparently, his student Heinrich Zeller was unable to master the insanely taxing vocal part and Strauss had to repeatedly interrupt the rehearsal. Then came the time for Pauline’s scene in Act III, which she knew well. In spite of this, she did not feel sure and envied Zeller because he had been given so many chances of repeating. Suddenly she stopped singing and asked Richard, to whom she had been secretly engaged since March 1894, why he was not interrupting her. Richard replied, that she knew her part well. Pauline retorted, “but I want to be interrupted” and threw the piano score at Richard’s head, but to the delight of the orchestra it landed on the desk of the second violinist. Having thus made her point, she stormed off the stage and locked herself in the dressing room, with Richard hurriedly following her. Once Richard returned to rehearsal the orchestral musicians enquired as to what kind of reprimand he had in mind for the temperamental soprano, to which Richard replied, “I am going to marry her”! And so he did, with the wedding taking place in a small chapel adjacent to the castle in Marquartstein on 10 September 1894. 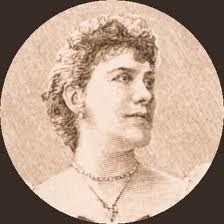 This anecdote amply illustrates the fiery, eccentric and outspoken nature of Pauline’s temperament, who for reasons of professional advancement also passed herself off as eleven years younger. The daughter of the celebrated General Adolf de Ahna was simply accustomed of getting her way. By contrast, Richard — in true Bavarian fashion —described himself as being phlegmatic by nature and occasionally prone to procrastination. Pauline was keenly aware of what she would have to give up in order to marry Richard and even warned him, “You, yourself know best how many weaknesses I have, and everybody knows my moods. And now I am supposed to suddenly become the model housewife”? Richard was undeterred and composed “Cäcilie”, the second song of his Op. 27, as a wedding present for his future wife one day before their nuptial ceremony. Their marriage, which can properly be filed under the category of opposites attract, lasted almost fifty-five years. Although Pauline became the perfect housewife and mother, she really never lost her high-strung temperament. And Richard, who liked to have a couple of beers in the local brewery and play cards with his friends remarked, “my wife is often extremely harsh, but, you know, I need that”. 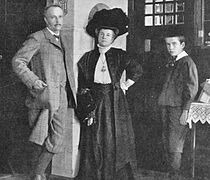 Anecdotes aside, their relationship was highly complex and based on a mutual passion for music. When he traveled without his wife, he wrote her long love letters nearly every day. And Pauline was entirely devoted to her husband’s well being. She made him concentrate on his work, provided regular meals, and the couple went for long nature walks every single day. In addition, she inspired and musically featured in a variety of his compositions. When Richard composed his autobiographical tone poem “Ein Heldenleben”, the Hero’s companion is clearly modeled after Pauline. Strauss writes, “It’s my wife I wanted to portray. She is very complex, very much a woman, a little depraved, something of a flirt, never twice alike, every minute different to what she was the minute before”. And when the celebrated diva Lotte Lehmann visited the couple in Garmisch, she reports “I often caught a glance or a smile passing between her and her husband, touching in its love and happiness, and I began to sense something of a profound affection between these two human beings, a tie so elemental in strength that none of Pauline’s shrewish truculence could ever trouble it seriously. In fact, I rather suspect that they were always putting on a kind of act for their own benefit as well as for that of outsiders”. If we want to know about their sex life, we once again have to turn to Richard’s music. The “Symphonia Domestica”, portrays daily worries and joys, their son Bubi splashing around in the bathtub, a domestic argument between the couple and a passionate and all-consuming reconciliation. There has never been any suggestion or evidence that Richard was unfaithful to Pauline or vise versa. In fact, Pauline was intensely jealous of her husband. At the tender age of eighty, she told a friend “I would still scratch the eyes out of any hussy who was after my Richard”. When Richard died on 12 September 1949 Pauline’s will to live was also broken, and she died only a couple months later in May of 1950.