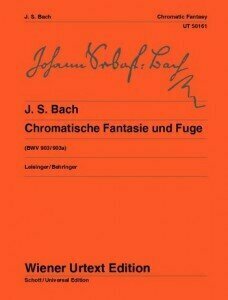 The musical Fantasy (or Fantasia or Fantasie) has its roots in improvisation and rarely follows a strict musical structure (such as Sonata or Ternary form). In this respect the Fantasy is related to the Impromptu. The term was first applied to music in the 16th century and suggested an imaginative musical idea rather than a specific compositional structure. The Fantasia became popular in the Baroque period, its form offering scope for free invention and musical imagination with alternating sections of differently textured music – demanding toccata-like/virtuosic passages, slow recitative often embellished with many ornaments, and improvisation, free modulation, deceptive cadences or fermata, and varied characters and mood. The resulting works were full of drama, imaginative and expressive.

For the pianist/keyboard player, the most significant fantasy from the Baroque era is J.S. Bach’s Chromatic Fantasia and Fugue BWV 903, an extravagantly dramatic work of great virtuosity with bold harmonies, wild flowing arpeggiations, and rich recitative-like passages. This complex contrapuntal keyboard work, along with other fantasias by Bach, was the inspiration for similar works by Franz Liszt and Ferruccio Busoni.

Mozart’s Fantasia in D minor KV 397, perennially popular with piano students, and pianists and audiences in general, is a striking example of the genre, with its dramatically contrasting sections culminating in a finale in carefree D major. It harks back to its Baroque and early Classical antecedents (specially the free Fantasies of C.P.E Bach) in its structure and organisation (spontaneous virtuosic passages, abrupt changes of mood, texture and style) but also looks towards Romanticism in its emotional breadth.

Chopin, who revered Mozart, retained the tradition of a one-movement structure for his Fantasy in F Minor Op. 49, and while the music itself has an improvisatory feel, in keeping with the Baroque model, the work is tightly organised and emotionally intense.

“It is principally in improvisations or fantasias that the keyboardist can best master the feelings of his audience” – C.P.E Bach

Meanwhile, Beethoven‘s ‘Moonlight’ Sonata, and the sonata which precedes it, are both subtitled “sonata quasi una fantasia” (a sonata in the manner of a fantasy). These works represent an amalgamation of sonata and fantasy form and marked a clear move to music which was more programmatic in its approach. It is unclear why Beethoven gave his Op. 27 Sonatas this subtitle, but in general the sonatas are performed without a pause between movements, while the individual movements are in extreme contrast with one another, a common feature in a fantasy. This free-form flow of ideas within the classical sonata structure was to have a lasting effect on Beethoven’s later output, in particular his late piano sonatas which utilise fantasy-like features, including disproportionately long development sections, modulation to unexpected keys, extended recitative-like passages, and irregular theme structure. The Op. 27 Sonatas also employ cyclic elements which unify the movements, a device which Franz Schubert was to use with great effect in his own fantasies and late piano sonatas.

Schubert’s “Wanderer” fantasy, one of his most well-known and frequently performed works, takes the fantasy form to another place, developing an idea (it is based on one of his own songs) to create a substantial work in four sections (or one long movement), linked by a unifying theme on which all four movements are based. Akin to a piano sonata in its structure, it breaks free of classical disciplines, thus opening up new avenues of musical exploration to be pursued by other nineteenth and twentieth century composers. Schubert’s heartbreaking Fantasie in F minor, D940, for piano four-hands, Schumann’s magnificent Fantasie in C, Op. 17, and Liszt’s one-movement monumental Sonata in B minor and his Après une lecture de Dante, Fantasia quasi sonata, all explore similar paths. These works are tightly structured yet are rich in free imagery, as befits the fantasy genre.


In a typical Fantasy, the composer sets out a theme at the opening, or near the beginning, and the remainder of the music is a musing or musings on the theme. In the nineteenth century, the Ballade and Rhapsody employed a similarly free structure, with an opening theme or statement which reappeared, reworked or embellished, during the course of the work. This period also saw the development of a sub-genre of the Fantasy as a virtuoso salon piece that became immensely popular among the growing middle-class audience – pieces which could be played on the piano at home or at intimate musical soirees. Such pieces were often based on opera themes and Liszt, and his great rival, Thalberg, wrote a number of ‘opera fantasies’ or “paraphrases”, full of opportunities for showy playing and fully utilising the range of the instrument. Such works were considered rather inferior to the more serious “sonata-fantasy” or “fantasy-sonata”. Today the Fantasy tends to be regarded as a shorter work, improvisatory and imaginative in style.