Liszt’s B-minor piano sonata is regarded by many as his ultimate masterpiece and it ranks alongside other “greats” in the pantheon of piano repertoire. This was not always the case, however, and in the nineteenth century it was met with extreme reactions, from admiration to suspicion and envy. The critic Eduard Hanslick declared “Anyone who has heard this and finds it beautiful is beyond help”, while Wagner heaped praised upon it. Alfred Brendel has called it “the most original, powerful and intelligent sonata composed after Beethoven and Schubert”. 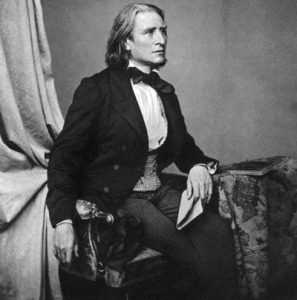 There are many perceptions, and misconceptions, surrounding Liszt, which have coloured views of the man and his music. For some he was a poseur and a charlatan, a “showman” whose virtuosity was a negative character trait, and whose music contains unstable melodic invention, has a tendency to “say things too often”, and is grandiose, vulgar and over-abundant. But Wagner called him “the most musical of all musicians”, and for the pianist Liszt mobilizes all facets of the instrument, rendering it a tool subordinate to the music. His Transcendental Etudes, for example, represent the height of musical sophistication and technical expertise, and his musical outlook in general was noble, orchestral and metaphysical. 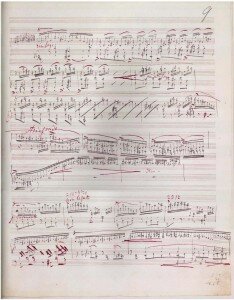 Manuscript of the Sonata

The B minor piano sonata is not a bravura nor particularly poetic piece. In its structure it references both the classical sonata form as conceived by Haydn and Mozart and continued by Beethoven and Schubert, and the looser term “sonata”, meaning an instrumental work in four movements. In the Sonata, Liszt combines all these meanings into a single movement – and by doing so he also continues what Schubert explored in his Wanderer Fantasy (a work Liszt knew well) and the late piano sonatas, where the sections of the work are linked via distinctive themes or motifs.

Completed in 1853 (an earlier version was composed in 1849) and published in 1854, the Sonata was dedicated to Robert Schumann in return for Schumann’s dedication to Liszt in his Fantasie in C, Op 17. A copy was sent to the Schumann household, after Robert had been committed to a mental asylum at Endenich, but Clara Schumann, on examining the manuscript, declared it “merely a blind noise”. It was premiered in Berlin on 27 January 1857 by Hans von Bülow, one of Liszt’s students (later his son-in-law), and it immediately prompted strong reactions. Otto Gumprecht from the German newspaper Nationalzeitung called it “an invitation to hissing and stomping”, and because of its newness and technical difficulties, it was a long time before the Sonata became a standard work in concert programmes. Today it is one of the most popular and frequently-performed works in the pianist’s repertoire. 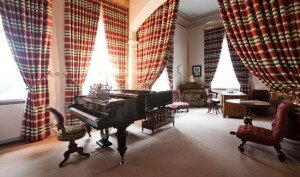 Lasting around 30 minutes, the Sonata is scored as a single movement with distinct sections – exposition, development, recapitulation and coda – in effect, a sonata within a sonata. Such is the inventiveness and spontaneity of Liszt’s writing, the entire work feels like a free-form fantasia rich in harmonic piquancy, romantic fire and powerful expression, but analysis of it reveals its well-organised structure. The beginning and end are the usual movements of a sonata, which bookend a conventional slow movement and a fast, light scherzo. But it can also be regarded as a four-movement symphonic structure, with the standard movements of an allegro, an andante, a scherzo and a finale. Liszt uses thematic transformations to make both schemes work and develops the entire work’s thematic material from a handful of motifs presented in the opening bars. This gives the work its structural unity.

Now a mainstay of the concert repertoire, the Sonata requires not only superb technical assuredness and physical stamina, but also the intellectual grasp to pull the thematic threads together and bring a sense of unity and coherence to the work. In addition to frequent concert appearances, there are over 50 recordings of the Sonata, and there is even an award-winning iPad app, created by British pianist Stephen Hough, a noted Liszt interpreter, which attempts to illuminate the Sonata through performance and in-depth analysis.