“Thalberg is the finest pianist in the world” 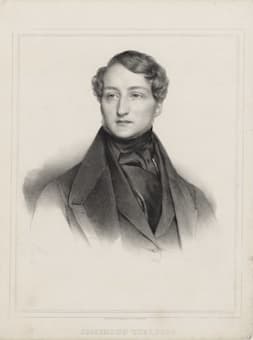 150 years ago, on 27 April 1871, the musical world mourned the passing of one of the most distinguished virtuoso pianists of the 19th century. Sigismond Thalberg (1812-1871) was greatly admired for his ability to combine “the merits of brilliant technique derived from Clementi, with the singing style of Hummel and Mozart.” Thalberg ingeniously superimposed both techniques on each other, and he became primarily associated with a piano technique termed the “three-hand effect.” As a contemporary reviewer wrote “it consists of a principle melody in the strings in the medium of the instrument played alternately by both thumbs, while both hands are traversing with rapid arpeggios the whole range of the keyboard. It is not a difficult trick, and it sounds and looks much harder than it is, but it caused a sensation.” We do know that Thalberg was born on 8 January 1812 near Geneva, but there is still much mystery surrounding his parents. Supposedly, he was the illegitimate son of Count Moritz Dietrichstein and the Baroness von Wetzlar. However, his birth certificate shows that his parents were Joseph Thalberg and Fortunée Stein. Thalberg and Stein were married, but probably to someone else. As such, it has been assumed that the Count paid Thalberg to assume paternity, and that his mother was a baroness in disguise. 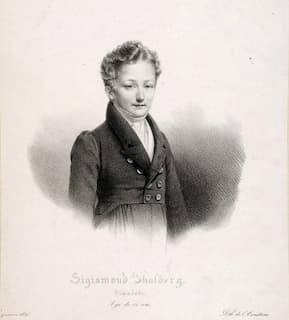 Thalberg was sent to Vienna to prepare for a diplomatic career, but concurrently he also studied music. He studied piano with Hummel and eventually took lessons from the distinguished theorist Simon Sechter. Already at the age of 14, Thalberg had great success as a salon pianist, and he performed his first public performance in London in 1826. On that occasion he took lessons with Ignaz Moscheles who reported to Felix Mendelssohn “Thalberg has reached a level at which no further help would be needed in order to become a great artist.” Thalberg met Mendelssohn and Chopin in Vienna in 1830, and both were astonished by his technical skills. Thalberg also met up with the 10-year old Clara Wieck in Leipzig. Clara listened to Thalberg perform his Piano Concerto Op. 5 and commented in her diary, “Thalberg is very accomplished. His playing was clear and precise, also very strong and expressive.” Several years later Clara reports anew, “Thalberg visited us and played to the delightment on my piano. An even more accomplished mechanism than his does not exist, and many of his piano effects must ravish the connoisseurs. He does not fail a single note, his passages can be compared to rows of pearls, and his octaves are the most beautiful ones I ever heard.” 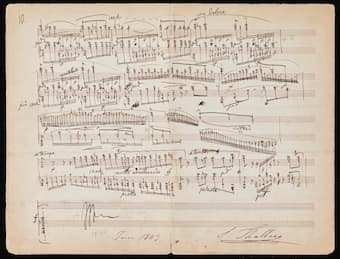 Within a couple of short years, Thalberg became one of the most famous musicians in Europe. He was appointed pianist to the Emperor of Austria and hailed as the leader of a new school of musical thought. He arrived in Paris in November 1835 and a substantial number of highly influential musicians believed that the innovations Thalberg brought to the piano “ushered in a modern style of piano-playing that would have lasting value.” Hector Berlioz enthusiastically wrote, “Moscheles, Kalkbrenner, Chopin, Liszt and Herz are and will always be for me great artists, but Thalberg is the creator of a new art which I do not know how to compare to anything that existed before him…” To be sure, Thalberg’s innovations greatly influenced subsequent generations of pianists, and his “three-hand technique” is still with us today. Thalberg’s rousing success in Paris was eyed with a great sense of jealously, and Franz Liszt set out to challenge Thalberg’s position as the leading virtuoso in Paris. Liszt got in the first blow and published a highly pejorative article criticizing Thalberg’s compositions. Thalberg responded in kind, and a duel at the salon of Princess Belgiojoso was organized to settle matters. The Princess diplomatically proclaimed both of them victorious saying, “Thalberg is the first pianist in the world – Liszt is unique.”

Sigismond Thalberg: Grand Fantasy on “God Save the Queen” 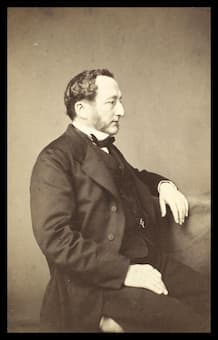 Thalberg continued to enjoy widespread and enormous popularity throughout Europe, and Heinrich Heine wrote, “His performance is so gentlemanly, so entirely without any forced acting the genius, so entirely without that well-known brashness that makes a poor cover for inner insecurity. Healthy women love him. So do sickly women, even though he does not engage their sympathy by epileptic seizures at the piano, even though he does not play at their overstrung, delicate nerves, even though he neither electrifies them nor galvanizes them.” Thalberg did try his hands at composing a couple of operas, but when his Florinda and Cristina di Svezia failed, he decided to tour the Americas. In 1855 he performed with overwhelming success in Brazil and Argentina, and one year later he traveled to New York. He spent several years performing, teaching, and organizing opera productions in the United States. Thalberg retired from the stage in 1860 and he spent his retirement cultivating vineyards near Naples. Thalberg’s musical innovations were soon forgotten, “drowned by trivial productions of his imitators.” As Thalberg put it, “my imitators have made me impossible.”