Music is the gate between the earthly and eternal world 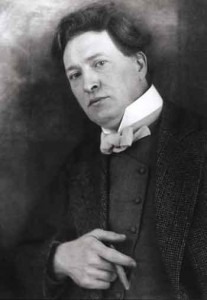 In 2016 we celebrate the 150th birthday of Ferruccio Dante Michelangiolo Benvenuto Busoni (1866-1924), one of the most talented and controversial piano virtuosos active during the second half of the 19th and early years of the 20th century. Busoni was obsessed with the intellectual content of music, favoring reflection and interpretation over virtuosity and bravura. He communicated his thoughts as an author and theorist, suggesting that “Music is so constituted that every context is a new context and should be treated as an ‘exception.’ The solution of a problem, once found, cannot be reapplied to a different context. Our art is a theatre of surprise and invention, and of the seemingly unprepared. The spirit of music arises from the depths of our humanity and is returned to the high regions whence it has descended on mankind.” Busoni had perfect command over every means of expression, and his compositional legacy primarily rests on a substantial number of transcriptions of works by Bach, Liszt, Mozart, Schubert and even Arnold Schoenberg. His 303 original compositions are less known, and a large number of his early works remain unpublished. They nevertheless offer a tantalizing window into the anxious nature of German musical life at the turn of the 20th century.

Born in Empoli—located roughly 20 kilometers southwest of Florence in the Italian Tuscany region—Busoni was a musical prodigy. He made his first public appearance at the age of seven, and enrolled at the Vienna Conservatory at age 9. After a brief period of study in Graz, where he composed a four-movement concerto for piano and string quartet and conducted a performance of his Stabat Mater, Busoni returned to Vienna and was introduced to Johannes Brahms. Sufficiently impressed, Brahms recommended Busoni to study with Carl Reinecke in Leipzig. Making his living by giving recitals, Busoni took a first stab at composing an opera. But it was his phenomenal keyboard technique that secured short-term appointments in Helsinki, Moscow and Boston. First transcriptions of the music of Bach, Mozart and Beethoven soon followed, and by 1894 Busoni settled in Berlin and managed his career as one of the most esteemed pianists of his time.

In 1896, Busoni wrote, “I have great success as a pianist, the composer I conceal for the present.” Yet his mature compositional voice did emerge in his Violin Sonata No. 2, Op. 36b, which subjects a theme of Bach to a complex series of variations. Equally astonishing is the monumental piano concerto, lasting a total of 90 minutes and containing parts for an off-stage male chorus in the final movement. Although these compositions aroused much publicity, they were generally subjected to aggressive comments from critics. His theoretical treatise Sketch of a New Esthetic of Music was published in 1907, and suggests that “The spirit of an artwork remains unchanged in value through changing years, but its form, manner of expression and the conventions of the era when it was created are transient. As such, what the composer’s inspiration necessarily loses through notation, the interpreter should restore on his own.” As such, Busoni predicted the course of 20th century music with almost psychic insight. “Music was born free; and to win freedom is its destiny,” Busoni wrote, and he advocated a release of all rhythmic and structural norms, freedom from major and minor scale systems and from distinctions between consonance and dissonance. He also advocated the exploration of microtones, electronic techniques and ethnic and popular styles, exerting significant influence on Paul Hindemith, Igor Stravinsky and his student Kurt Weill. Although regarded was one of the greatest piano virtuosi of all time, his compositions were long deemed seemingly incomprehensible. Neither tonal nor completely atonal, these works seemingly represent a gateway between the earthly and eternal world.