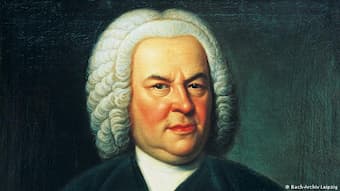 Schoenberg, the master of the Second Viennese School, called him the first 12-tone composer. It was his treatment of chromatic themes that prompted that statement. It’s J.S. Bach, of course, and one of the works that prompted that label was his Chromatic Fantasy and Fugue, BWV 903, which begins with not one but two ascents up different parts of the chromatic scale.

The work was probably composed between 1717 and 1723 while Bach was in Köthen. It is its chromatic nature, which explores all keys, that causes scholars to link it with his experiments while in Köthen. Although Bach’s original manuscript is lost, the extraordinary nature of the work has caused it to survive in 16 different copies, five of which date from Bach’s lifetime. Not all of the versions are the same and it is assumed that Bach was the source of the various versions, since none can be traced back to a common source.

The number of different copies is testimony to the fame of the work. That Bach had a reputation as brilliant improvisor is indicated by his 1747 visit to the court of Frederick the Great at Potsdam, where his son, C.P.E. Bach, had a position. There, the king presented Bach with a theme and asked him to improvise a fugue on it. Bach created a three-part fugue on the piano keyboard at hand. The king next asked him for a six-voice fugue of the theme, which Bach created once he’d returned to Leipzig and sent it to Frederick as his ‘musical offering.’ While he was with the king, however, he took his own theme and improvised his own six-voice fugue.

The Chromatic Fantasy and Fugue is of the most difficult nature, requiring a virtuosic touch. In the Fantasia, the hands alternate playing, yet the result has to be an unbroken line. At the same time, the Fantasia, which has the nature of a toccata, carries an improvisational style. The fantasy, as a genre, was popular with Romantic composers, from Mendelssohn to Liszt and Brahms, to demonstrate their virtuosity and expressiveness.

Each new generation of performers has grappled with the work. Innovative pianists such as Glenn Gould made ‘non-romantic’ interpretations that included accents in unusual places and no use of the pedal.


As pianistic as Gould’s recording is, it really feels like the true work comes out best on the harpsichord. Its brittle sound, responding to the flow that Bach created, seems to bring out the work’s chromatic character better.


The Fantasia is in three parts: the first is a prelude, filled with arpeggios; the second part is more recitative-like, and the third a combination of the two. The arpeggios are technically demanding, requiring fast passagework. As a contrast, the recitative-like section requires a greater sensitivity and contrasts with the first section.

The Fugue, on the other hand, is strict by its very nature but then relaxes, seemingly in response to the freedom of the Fantasy section.

The work as a whole is remarkable – it has an harmonic boldness unexpected in the music at the time, but, on the other hand, may be very representative of what Bach normally achieved in free improvisation at the keyboard.

There are few recordings of the work for other than keyboard, but we have found a couple, including an arrangement for clarinet, marimba and bandoneon, arranged by the clarinetist Richard Stoltzman, and one for cello and piano.


The Hungarian composer Zoltan Kodály also arranged it for viola.


Each version changes the work – the marimba mellows the rapid arpeggios and the viola seems to sharpen them. They each help us to hear the work a different way, and, in deepening our listening experience, bring us back to the keyboard original.