Blog
The Orchestra in Hollywood
by Oliver Pashley February 17th, 2021

What do dinosaurs, an extra-terrestrial and a killer shark all have in common? The answer: well, apart from at-times-questionable prosthetics, they all share a soundtracks featuring sumptuous orchestral scores, in this case, from the modern master of movie music John Williams.

Whether it’s accompanying a group of young wizarding students or underscoring an interstellar battle, John Williams is often credited with bringing orchestral music to a whole generation of viewers, his collaboration with Steven Spielberg spawning blockbusters such as Jaws, E.T., the first three Harry Potter movies and four in the Indiana Jones franchise.

The tradition of orchestral film music, however, stretches back decades before John Williams rose to fame. Right from the get go, orchestral music was a regular staple of Hollywood movies, and composers were trying their hand at film composition alongside their pieces for the concert platform. Korngold, for example, was happily scoring film music from the mid-1930s to the end of his life in the late 1950s, during which (in 1945) he premiered his famous Violin Concerto which contains more than a small dose of recycled film tunes. 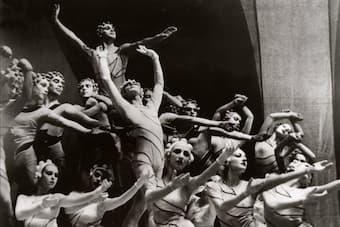 A performance by Ballet Russe © The Line

Having watched a fair chunk of old movies during the pandemic this year, I was struck by how much, ahem, ‘inspiration’ certain film composers drew from existing works. Of course, there were many film composers, such as Bernard Hermann, who carved out their own distinctive voice in their movie scores – yet often you can still pick out a little tipping of the hat to an older preexisting work. Sometimes the boundaries are so blurred that some argue they can’t be separated at all: in 2006 the Gustav Holst Foundation famously sued Hans Zimmer for allegations over plagiarism in his soundtrack to Gladiator, claiming it ripped off Mars from Holst’s Planets suite.

Unsurprisingly, a lot of earlier film music I heard reminded me of the pieces that Sergei Diaghilev created with his infamous Ballets Russes: watch a movie from the 1940s and you’ll hear more than a little bit of Ravel’s sumptuous Daphnis et Chloé, or Stravinsky’s Petrushka or Firebird. Diaghilev’s company specialised in spectacle, in dazzling entertainment, and it’s no coincidence that the lush and innovative sound worlds that emerged from this dance troupe perfectly suited the world of Hollywood, with its melodramas, high action, intense love and vast emotional sweep. The score for incredible 1948 film The Red Shoes, penned by Brian Easdale, more than dips its toe into the waters of Daphnis et Chloé, for example. 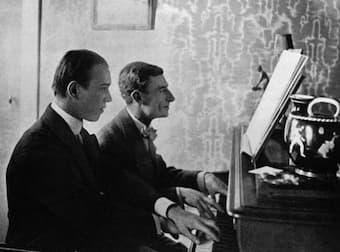 Away from Diaghilev, it’s interesting to see the influence of certain composers in Hollywood scores, whether it’s Bernard Hermann and Bartók, or Richard Addinsell’s Warsaw Concerto and Rachmaninoff. In Rachmaninoff’s case, the music is so lush and tuneful that you’d be forgiven for mistaking a movement of one of his symphonies for an emotional underscoring of a Hollywood love scene. 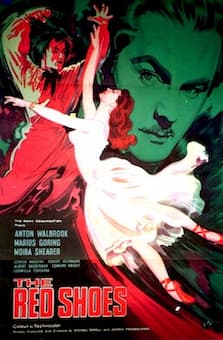 This melting pot of styles fascinates me. Nowadays, when the roles of ‘serious’ and ‘film’ composers seem more delineated, more separated, it’s interesting to look back into relatively recent history when there was a smaller (if any) distinction between the two. If you are a fan of film music, delve into Paris at the turn of the century and listen to Stravinsky’s early ballets. Get to know Rachmaninoff. Listen to Debussy, Prokofiev, Shostakovich, Bartók. Immerse yourself in the soundscapes of Ravel and witness the birth of modern film music.

And seriously, go and watch The Red Shoes. It’s great.