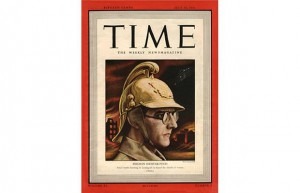 With the German Sixteenth Army strategically entrenched just thirty miles southeast of Leningrad, the city also known as St. Petersburg got ready for the most prolonged siege of World War II. Among the citizens of Leningrad was a thirty-four-year-old composer whose music was one of the most valuable cultural exports Communist Russia had allowed to reach the outside world. The symphonic works of Dimitri Shostakovich had been performed in New York, Boston, Philadelphia and beyond, and his distinctive and innovative musical voice placed him at the vanguard of modern music. Shostakovich’s relationship with the Stalinist regime, during this time of show trials, executions and harsh imprisonments for critic of the political system, however, had been perilous at best.

At the beginning of the “Great Patriotic War” in 1941, Shostakovich, like millions of his countrymen, sought to enlist in the Red Army. He proudly declared, “Until now I have only known peaceful work. But now I am ready to take up arms.” However, Shostakovich was quickly rejected because of his poor eyesight. He appealed the decision and tried to enlist once more, but the result was the same. Instead, he joined a home guard unit drawn from members of the Leningrad Conservatory where Shostakovich himself was on faculty. For several weeks, the composer helped to build defensive lines and barricades, and dug trenches around the city. Once the German bombardment of Leningrad started in earnest, city authorities urged him to leave. However, Shostakovich demanded to stay put and joined a firefighting brigade charged with extinguishing incendiary shell that might land on the roof of the Conservatory. This assignment “proved largely symbolic, as the school’s directors always found excuses to keep their most valuable faculty member busy elsewhere.” 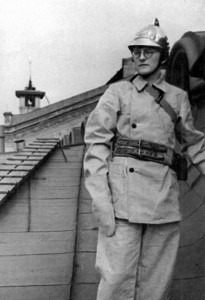 The famous composer, bespectacled and helmeted in his fire warden’s uniform with large oven mitts on his hands and standing on the roof of the Leningrad Conservatory was a propaganda opportunity not to be missed! On 29 July 1941, a number of photos were taken and widely distributed in Leningrad and beyond. A stylized image with Shostakovich wearing a golden helmet and holding a fireman’s nozzle even made it onto the cover of the 20 July 1942 issue of Time Magazine. Against the burning ruins of the city, a musical motive drifts across the sky. And the famous caption reads, “Fireman Shostakovich: Amid bombs burning in Leningrad he heard the chords of victory.” The musical motive actually belongs to a large-scale symphonic composition, which Shostakovich began drafting on 19 July 1941. No composer before Shostakovich had ever written a symphony during a raging war, “and no composer had ever attempted to describe a future victory, in music, with such power and conviction.” There is an old saying in Russia that states, “When guns speak, the muses keep silent.” Supposedly, Shostakovich replied, “Here the muses speak together with the guns.”

Dimitri Shostakovich: Symphony No. 7, Op. 60 “Leningrad”
Things looked rather bleak militarily when Shostakovich started on his “War Symphony.” When the first movement was complete on 3 September, German force massed for an assault, and shells rained on the outskirts of the city. The second movement was finished on 17 September, and Stalin was having doubts as to whether it was possible to hold Leningrad. The fighting continued unabated for the next 12 days, and Shostakovich finished the third movement on 29 September. However, the situation was becoming dire, and on 30 September Shostakovich was ordered to leave Leningrad. Together with his family the composer departed for Moscow, but since that city was also under threat from German forces, they were placed upon a refugee train and carted to the town of Samara. Finally settled, Shostakovich started work on the final movement on 10 December and finished the work roughly 14 days later. Nicknamed the “Leningrad Symphony” and dedicated to “our struggle against fascism, to our coming victory and to my native city of Leningrad” the work was soon exported, and over the next couple of years, performed almost 70 times in the US alone. But it was also brought to the concert hall, with the city still under siege, on 9 August 1942 in Leningrad itself. A playwright in the audience wrote, “People who no longer knew how to shed tears of sorrow and misery now cried from sheer joy. It was not an impression, but a staggering experience.” The siege of Leningrad was finally lifted two years later, but almost one million of the city’s civilian population had by then perished.