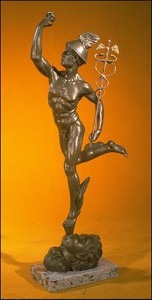 Gustav Holst is best known for a single work: The Planets. A unique symphonic work, it has little precedent in the orchestral literature. It might be compared to Mussorgsky’s Pictures at an Exhibition or even Elgar’s Engima Variations, but both of those works are much smaller. Few other composers attempted such a large-form work that is unified solely by the title and where each movement remains self-contained.

Holst combined his interest in astrology with his earlier study of Sanskrit literature. He sought to give each planet its own characteristics and, in the early 20th century, when this was written, the planets were still quite mysterious. We are used to their images now: the red spot on Jupiter, the clouds on Venus, the rings of Saturn, but that commonality of knowledge had to wait until space exploration and space imaging improved in the late 20th century.

Holst started to work on the piece in 1913 and completed it in 1917. The order of the planets (Mercury, Venus, Earth, Mars, Jupiter, Saturn, Uranus, Neptune) is not the order of the piece. It’s not even the order of composition, where Mercury was the last piece to appear. Nonetheless, Holst’s order is the order we use:

Mars starts with an ominous rumble and ends up with pounding rhythms and a strong dissonance that we accept as appropriate to the character. We must remember that this is still very much a pre-World War I work and any images we may have of Mars, the Bringer of War, for example, as a military piece have to be taken in a more fundamental sense.

Holst: The Planets: II. Venus, The Bringer of Peace (Royal Scottish National Orchestra ; David Lloyd-Jones, cond.)
Mercury, on the other hand, is the Roman god, flitting here and there, with wings on his heels and hat.

Holst: The Planets: III. Mercury, The Winged Messenger (Royal Scottish National Orchestra ; David Lloyd-Jones, cond.)
The lightness continues with Jupiter, the Bringer of Jollity. This is not the usual image of Jupiter, the Roman King of the Gods. With his usual thunderbolt and eagle, he’s seen more as a god of judgment and law, rather than humor and frivolity. One of the tunes used in the movement (at 03:25) was later used for a hymn (I Vow to Thee, My Country) and it is only in this late melody that we see the traditional Jovian image emerge.

Holst: The Planets: IV. Jupiter, the Bringer of Jollity (Royal Scottish National Orchestra ; David Lloyd-Jones, cond.)
Saturn, the Bringer of Old Age, was Holst’s favourite and seem to be a dark philosophical vision of an inevitable future. Yet, at the end, the tension seems to pull away and we’re left in peace.

Holst: The Planets: V. Saturn, the Bringer of Old Age (Royal Scottish National Orchestra ; David Lloyd-Jones, cond.)
As we get out to the furthest reaches of our solar system, we have Uranus, the Magician, which seems closer in feeling to something like Dukas’ The Sorcerer’s Apprentice, a work that was unknown to Holst. There’s a playfulness in the strings, yet the feeling through the piece gets heavier and heavier until we’re completely swept away.

Holst: The Planets: VI. Uranus, the Magician (Royal Scottish National Orchestra ; David Lloyd-Jones, cond.)
The final planet, Neptune, The Mystic, adds a women’s chorus to the general mystic feeling. The piece as a whole seems closer to Debussy’s impressionistic works. The wonderful ending, getting infinitely more silent as time passes, moves us on into infinity.