“My music creed is the inspired idea” 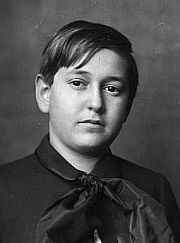 Erich Wolfgang Korngold (1897-1957) might have been the most phenomenal musical prodigy of all time! At the age of 9, he played his cantata Gold to Gustav Mahler, who pronounced him a genius. Merely two years later he composed the ballet Der Schneemann (The snowman), which caused a sensation at the premiere performance at the Vienna Court Opera in 1910. Various compositions for chamber ensemble and solo piano quickly followed, and Richard Strauss wrote, “‘One’s first reaction that these compositions are by a child are those of awe and concern that so precocious a genius should follow its normal development…This assurance of style, this mastery of form, this characteristic expressiveness, this bold harmony, are truly astonishing! By age 14 Korngold had completed his first orchestral composition, and finished his first two operas 3 years later. The musicologist Hermann Kretzschmar called him “phenomenal even among the exceptional cases of early musical development.”

Erich Wolfgang Korngold was born in Brno, son of the eminent music critic Julius Korngold. The family moved to Vienna, and Erich was writing original music at the age of 7. On the recommendation of Gustav Mahler he briefly studied with Alexander von Zemlinsky and his first compositions, privately published by his father, were distributed to a number of musical authorities. As word of the young wunderkind started to spread, distinguished performing artists and conductors championed his compositions. Even at this tender age, Korngold’s musical style featuring lyrical melodies, rich textures, virtuoso orchestration and a strong sense of theatricality was already fully developed! Completed in 1914, his first operas Der Ring des Polykrates and Violanta premiered under Bruno Walter, and Die tote Stadt secured Korngold’s international reputation. Korngold was active in theaters throughout Europe, and his arrangements of classic operettas by Johann Strauss and others attracted the attention of the theatrical producer and film director Max Reinhardt. 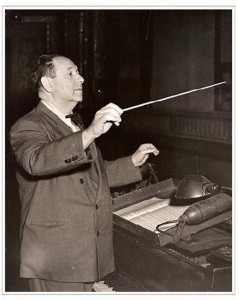 Reinhardt invited Korngold to Hollywood in 1934 to work on the film score for Shakespeare’s A Midsummer Night’s Dream. Korngold tailored his score not merely to the dramatic needs of the literary work but also to the abilities and talents of the actors. Over the next four years, various Hollywood collaborations followed in which Korngold “pioneered the symphonic film score, using leitmotifs for each of the main characters in the film to respond to the emotional level of a scene.” Andre Previn candidly wrote, “Korngold was a master film composer. His wonderful melodies, orchestrated in the most gorgeous Richard Strauss-oriented manner, are a joy to hear, even when the films are forgettable.” Korngold always intended his scores to function independently from the moving image, and to be equally effective on the silver screen and in the concert hall.

Simultaneously with his Hollywood productions, Korngold attempted to maintain his concert and opera presence in Europe. However, the annexation of Austria by the German National Socialists forced his family to settle in the United States during the war. In 1946 Korngold bid goodbye to the Hollywood film industry and returned to composing absolute music. However, the Cello Concerto, the Symphonic Serenade and the Symphony in F-sharp written in his characteristically lush and late Romantic style failed to attract the attention of listeners and critics alike. Korngold suffered a stroke that left him partially paralyzed in 1956. He nevertheless sketched a second symphony and a sixth opera, but died on 29 November 1957 believing himself to be virtually forgotten. For a number of decades, Korngold attracted minimal critical attention but around the time of his centenary in 1997, interest in his music gradually awakened. Since then, his music has become increasingly popular and appears with some regularity on major recordings and concert programs.