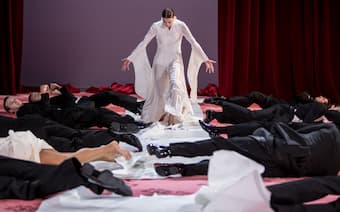 The idea of Tanztheater (dance theatre) came out of Germany in the 1920s. It started as ‘expressionist dance’ and was reborn in the 1980s in the work of German choreographers such as Pina Bausch and Reinhild Hoffmann. The influences of Bertold Brecht and Max Reinhardt are acknowledged as is the cultural melting pot of the Weimar Republic.

In 1983, Reinhild Hoffman created the ballet Callas, using dramatic arias sung by Maria Callas as her musical base. In 2017, she was invited to recreate the work with the Ballet du Grand Théâtre de Genève in Switzerland. The original work for 18 dancers was enlarged to encompass 22 dancers. At this point, 34 years after the work’s debut, she was faced with teaching the dancers a new dance vocabulary. 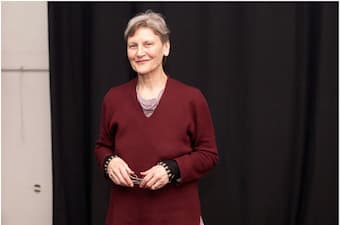 To go back to the origins of the work, Hoffmann first sought to set Othmar Schoeck’s Penthesilea, but permission was denied. The same with a request to set Richard Strauss’ Elektra. Hoffmann gave up on the world of copyright characters with their guardian families and looked to find another strong woman character and chose Maria Callas. In Callas, Hoffmann found a life that everyone knew but that was still shrouded in mystery – recognition and exploitation matched with loneliness and sadness. As much as there was song, there was silence.

The choreographer is adamant that the work is not one of biography. The ballet is divided up into 8 scenes: At the Opera, Two Women in White, Dressage, Wings, Doll and Mirror, Table, In the Bar, and Swing.

Scene 1, set to music by Delibes and Gounod, starts with that most familiar of actions At The Opera – inching along a row to find one’s seat….and then being in the wrong row, being in a different row than the person you’re supposed to be sitting next to, being in the way. It’s a brilliant caricature of something we’ve all been through.


Two Women in White takes the Macbeth story but for dancers – Lady Macbeth has hands of blood but uses them to colour some white shoes in the most lurid manner… and then dances in them. As the dance progresses, Lady Macbeth’s pristine white gown become more and more and more stained. It’s not just her hands that will be the problem. At one point she appears to be killing the male dancers with just a touch of her shoes.


Dressage, that art of training a horse, has the dancers onstage with whips and a rather jumbled story line. It seems to be a power struggle, but that’s not at all clear.


Doll and Mirror takes one of the most familiar of the arias, Carmen’s declaration of her independence. The entire troupe is on stage wearing costumes that can be matched to some of Callas’ greatest roles. Later, two dancers dance with dummies and switch partners, but not the way you expect.

The choreographer’s declaration that the work is not a biographical survey of Callas’ life aside, certain parallels can be constructed – what does it mean when the prima ballerina literally claws down the curtains? Or when her clothes get stuffed with balloons and she trebles in size?

This happens In the Bar, to chopped music that eventually returns to the aria from Lakmé that we heard at the beginning of the ballet. This entire scene is the most disturbing – our central figure has become a commodity to be used for kisses and fondles, rude dances and frottage – and appears to be shocked by all of it and unable to escape.

The work closes with Swing. One character in green velvet with a chair under her dress creeps in and, setting a metronome in motion, rocks back and forth. Behind her, in a similar repetitive motion but one full of freedom, a dancer is on a swing, kicking her legs high and exulting in a life that the other dancer can no longer achieve.


For excerpts from the ballet, see https://vimeo.com/252318017. The ballet is also on the television channel Mezzo during February.

It’s a striking work that carries us through modern ballet, opera, and the modern idea of celebrity.