This atmospheric miniature was composed in 1963 as a test piece for the inaugural Leeds Piano Competition (which was won by Michael Roll, the seventeen-year-old pupil of Dame Fanny Waterman, the competition’s founder). The competition committee regarded it as a high honour to commission a piece from the UK’s leading composer, and Britten’s contribution lent an extra prestige to the first edition of the competition. 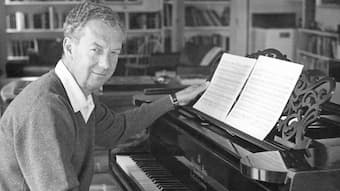 On first sight, this piece, lasting a mere 6 minutes in total, seems rather simple in comparison to the highly virtuosic and technically demanding repertoire candidates were expected to present. In fact, this miniature miracle demonstrates Britten’s understanding and appreciation of the resources and timbres of the modern piano, and for competition candidates, it offers significant challenges, not only in the technical control of the instrument but also as a test of their interpretative and imaginative capabilities, especially when no recording of the piece existed. The piece is also very challenging in touch, legato melody and subtle use of the pedal to manage its different layers and sonorities. It is an exercise in both tonal and dynamic control, and finely-nuanced expression, and is a wonderful test of musicianship for any pianist.

Some of Britten’s best music was inspired by nighttime, including his ‘Serenade’, ‘Nocturne’ and opera ‘A Midsummer Night’s Dream’. Notturno inhabits some of the same soundworld and ambiance as ‘Night’ from Holiday Diary, at least in its opening and closing sections. It is also related to the nocturnes of Chopin in its structure (ternary) as a more florid middle section contains ornamentation and filigree motifs redolent of those found in Chopin’s music. The piece has also been compared to the night music of Bartók, and it certainly shares elements of ‘The Night’s Music’ from the Out of Doors suite, particularly in its evocation of the noises of nocturnal birds and other creatures of the night. 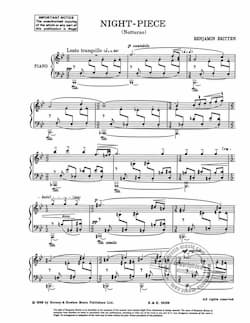 The piece opens very quietly, with a simple cantabile melody over gently undulating broken octaves in the bass, with a pedal note in each bar to underpin the harmony. The melody reappears in different harmonies and registers in the piano, gradually gaining momentum in sound and tempo. At bar 26, a new rhythmic motif in sextuplets is introduced, initially heard as a murmuring PPP, but which becomes increasingly insistent as the music grows more animated. The sextuplet rhythm continues into the middle section of the piece, now marked tranquillo, and for the most part the serene atmosphere of the opening returns. A sf marking heralds the start of a quasi cadenza of trills and other filigree motifs in free tempo, and here Britten imaginatively brings to life the curious nocturnal sounds of nature – scurrying animals and chirruping birds – before a long pause and the reprise of the opening melody. Calmness returns as the music moves towards its close, a chord comprising notes “silently pressed down before the pedal is released”, allowing the instrument’s harmonics to sound and gradually fade.

Despite its taut structure, the piece has an improvisatory air and the best performances are those which create the impression of the pianist lost in thought, occasionally distracted by louder nocturnal rustlings and chirrups. The magic of the piece lies is its shifting harmonies, used for colour and timbre rather than strict harmonic structure, its subtle dynamic shading and vivid musical narrative.